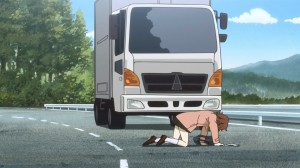 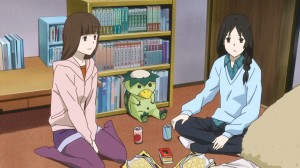 This season of Natsume has just been on the ball lately. Every week has been well done and they are giving us a great variety of stories. This time we get to see a dual vision of the same time spent by Natsume in one of his old towns. Have to say Yuriko was a great choice for the normal person perspective. She wasn’t stupidly kind (was upset when he kicked her), but really gave her best not to be sucked into everyone’s superficial views. This series really just continues to amaze me at how I can keep getting drawn into the episodes. Natsume just makes me care about what’s going on every single week.

It was pretty interesting at the start to see how this girl viewed Natsume before he was picked up by the Fujiwara family. We’ve seen how some youkai looked at him, but this time it was from a person. Funny that I thought Yuriko’s mother was going to encourage her to be friendly with a transfer student and instead she told her to isolate the guy. Unfortunately his past would lead to parents telling their kids that which would only make Natsume feel even more alone. That he had to learn to run or avoid youkai without being too obvious was bad enough, but then he was already a step behind because people were told not to get close to him. I get her mother did it from worry for her child, but in that case who would care about Natsume? The families that kept passing him around like unwanted luggage? But really I liked Yuriko as a character overall. She felt regret after talking about the haircut and really reached out to him. It couldn’t have been easy with the wall he tried to put up when it came to people. Not to mention you’d think it’d be more than just her mother telling her not to get involved. Maybe she’s similar to Natsume in that she can’t turn away when someone is in trouble. 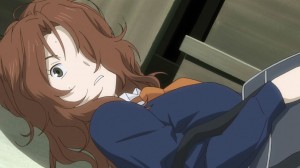 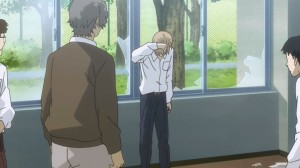 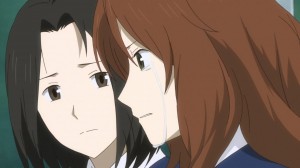 I can’t believe that the teacher would even put blame on Natsume. I mean three broken windows and Natsume has nothing around him. Do they think he punched three windows to bits? Not to mention the glass is inside the school so the damage came from outside. Just because he’s there doesn’t mean he’s responsible. I’m glad Yuriko pointed out something like that. But of course everyone just saw what they wanted to see. I’m not lost on the irony that Natsume can see youkai no matter his wishes, but people can choose not to see the truth. Of course Natsume being that too kind person just took all the blame since he couldn’t say youkai did it. The last thing I’m sure he wanted as well was to drag someone kind enough to care about him into it.

Maybe even more interesting was getting to see things from Natsume’s perspective too. It’s really sad how seeing youkai made him freak out about just about anything. Even a harmless one that just hangs onto humans to protect itself had him freaking right out. Of course the big thing was how that scythe youkai chased Natsume around the whole time. It really made his time there difficult. There just always seems to be a youkai that won’t leave Natsume alone. While this youkai may not have been all bad, he did lead to Natsume having to go. Said he hated Natsume, but I really do wonder. Youkai aren’t always the most open and honest creatures in the world. Plus if he hated that much then he wouldn’t have gone out of his way to save Yuriko. In that respect I wonder why the youkai saved Yuriko. His responsibility to the shrine? Because she had been friends with Natsume? Out of guilt for being the reason Natsume had to move yet again? Maybe it’s easier for some to get, but I’m just not sure.

Honestly this episode would have been perfect if Natsume and Yuriko met again. I mean sure she knows he’s alright, but it just doesn’t seem to be enough. I like that more personal touch where they could have said hello. It’s better than nothing of course. Yuriko now knows that Natsume is doing alright and finally has found a kind place to take him in. Both of them know now where the other one is so going to visit is possible. Sure they don’t have specific addresses, but not like either are living in the biggest cities in the world either. I simply choose to believe they at least meet again even if it wasn’t on screen. 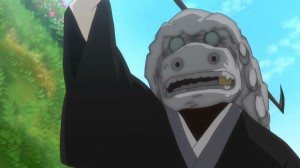 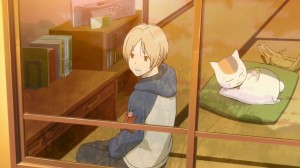 This was another great Natsume episode. Not perfect because they didn’t have those two meet again, but close. The episode helped give some hope for people (at least one girl tried to understand Natsume and cared) and it let us see just how much Natsume went through. While Yuriko’s grades aren’t the best, both of them are alright.
Score: A