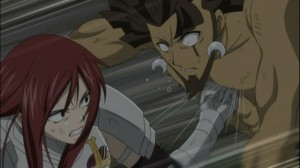 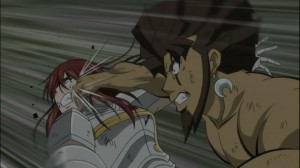 Two words: “EPIC BATTLE”, are enough to describe this episode. Its rare that Fairy Tail focuses so much on a battle, one thing that sets it apart from other shounen series. Unlike say Bleach or Naruto, even the big battles wrap up inside on episode, with plenty of other things littered throughout the episode. Thus, it was kind of really refreshing to have the entire battle dedicated to a battle, and one with none other than Erza. The fight was fast paced, action packed and JUST the right length that made it perhaps the best battle we’ve had from Fairy Tail, eclipsing perhaps, battles faught by the main character Natsu himself. 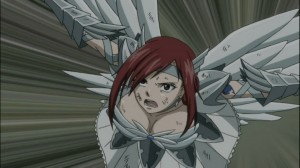 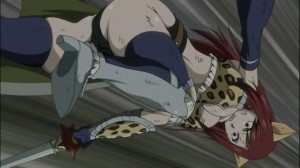 Erza really did pull out all the stops to defeat Azuma. Every armor she had ever used, as well as a few we hadn’t seen. I admit, before this battle, I didn’t think of Erza any stronger than say… Natsu, but in this battle we really get to see the distance between the two. Sure Natsu pulls through in moments of need, more so because of his Dragon Slayer powers and hidden potential. Erza on the other hand, has perfected her re-equiping as well as her fighting skills. 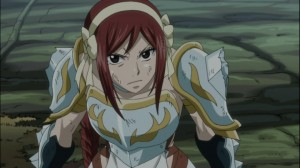 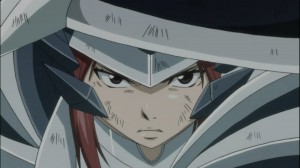 Azuma, was definitely a fearsome foe as well, and there’s no surprise that he was able to defeat Mirajane. Had Mirajane continued the battle, she would’ve had to deal with his powers in full force. In many ways, what we saw of his power in his battle with Satan Soul Mirajane wasn’t all he had. Then again, where he was fighting Erza, had the most extreme advantage. Unlike an open feild, the forst is where the Tree Mage has his best field advantage. 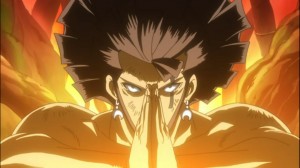 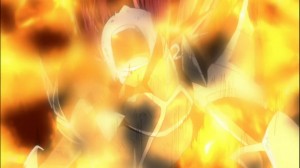 The fact that he had the power of Tenrouje, the tree the size of an Island, well… It was slightly unfair for Erza to have to take him on. Of course, that unfair advantage turned out to be his very end, since Tenroujee ended up siding with Erza when Azuma tried to use its power a second time to blow Erza away.

Also this episode, Erza x Jellal fans were probably extremely giddy. While I’m not a diehard Jerza fan, I do find myself rooting for the couple, and it was definitely cool to see Jellal be able to call out to Erza and get her up the first time she went down. At the same time, its kind of interesting plot wise. It seems that there’s some sort of telepathic link or something between the two of them. Not only could Jellal tell when Erza was facing one of the worst enemies ever, but Erza could hear Jellal’s encouragement. 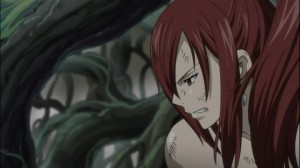 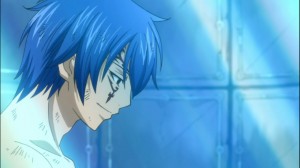 This also clued us in to where Jellal is currently. It at least shows that he’s not dead, even if he inside a Magic sealing chamber. Also, I’m sure someone noticed the little plug of that annoying villain from the filler arc pop in there. It is nice to see things being kept consistent, although why you’d waste those frames on that annoying character, I know not XD 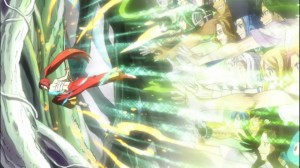 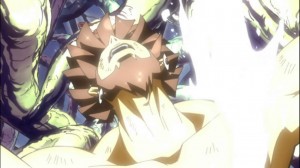 In the end, Erza was able to use the power of her friends to succeed and beat Azuma. Its safe to say that Azuma realized how amazing the Fairy Tail guild was, and it seems to be a pretty standard pattern among those that are being beaten. Both Azuma and Meldy have realized how amazing and family-like Fairy Tail is. Now I wonder if they’ll end up eventually joining Fairy Tail or not, but Fairy Tail continues its “bad guys see the light” thing with this episode’s resolution. We also saw Meldy helping Juvia when her magic was being drained.

So now the board is reset. I’m sure all the other big fights will resume now. Overall, this was a pretty sweet episode, and one of the best battles I’ve seen come out of Fairy Tail. 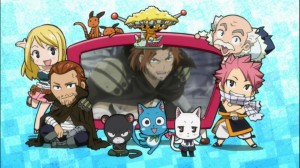 Everyone else is back on their feet! let the fighting commence! Next week!