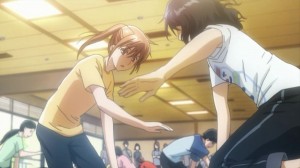 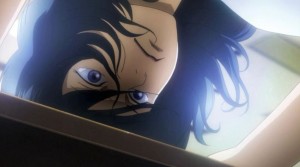 After last week’s major cliffhanger, I was excited to see how things turned out in Chihaya’s match.  Unfortunately, my dreams were dashed as the game didn’t turn out as I had hoped.  The episode kicks off right where we left off last week; Chihaya managed to snag her second card from Shinobu and is finally able to keep up with her.  As she runs to pick up the card she flung across the room, several spectators are murmuring amongst themselves and comment on how Shinbou no longer has her trademark smile.  In fact, she looks positively furious.  Chihaya returns to the match and people are also mentioning how Chihaya doesn’t look like she’s given up, despite how the game is going.  While this appears to be admirable to the other spectators, Taichi facepalms internally because Chihaya is pretty much an open book to her opponent at this point.  The next card is read and Shinbou is able to get it from Chihaya, which brings back her trademark – and my I add, incredibly creepy – smile.  Unfortunately, Chihaya being able to take a couple cards from her wasn’t enough to change the tide of the game and she ends up losing.  On the bright side, she was able to take a total of five cards from Shinobu, which is still unheard of.  Once their cards are cleaned up, Chihaya remains in the room while Shinobu leaves.  She heads straight for the table where all of the matches are displayed and stares at Chihaya’s card.  The man in charge of taking note of who wins the matches and what the scoring was is surprised to see her so soon (honestly, you’d think he’d expect it by now) but is quickly scared off by the crazy look in Shinobu’s eyes.  As she repeats Chihaya’s name over and over, she swears that she will destroy her in their next match and won’t let her take a single card.

Once the full round is over, Chihaya finally manages to bring herself to leave the room.  Taichi leaves as well to try and find her since he’s worried about her.  He finds her sitting on a bench practicing her movements during the game and he’s somewhat surprised that she doesn’t appear to be upset about the loss at all.  Then he notices that she is in fact crying, though she’s using his disappointment to become determined to get better at the game.  He seems inspired by her, but can’t spend much more time with her because his next match for the Class B tournament is about to begin.  Chihaya sits through the rest of the Class A tournament to see who Shinobu ends up playing in the end.  She ends up playing Sudo and as expected, wins the match though Sudo only lost by a total of five cards.  After the match, Sudo informs Shinobu that he had been hoping she’d go easy on him since it’s his last year to be able to compete in the individual tournaments for school.  Shinobu smirks and says something that irks Sudo (I think she said something and insinuated that he’s an old man or something similar to that).  The Class A tournament ends and Chihaya is found by Kanade and Komano.  They tell her that she needs to hurry and come with them.  Chihaya is confused as to what’s going on, but they inform her that while she was watching the Class A tournament, Taichi was able to make it to the finals for the Class B tournament. 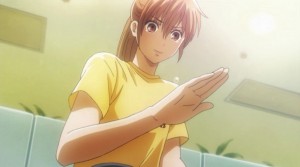 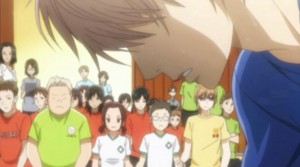 Chihaya rushes downstairs with Komano and Kanade on her heels and they find their seats next to Nishima.  He whispers to them and tells them what’s going on.  The group watching in anticipation of the next card, but Taichi seems to be moving slower than normal and actually reaches for the wrong card all together.  Kanade is worried about Taichi since faults almost never happen in Class B and higher.  Nishima makes the comment that Taichi is probably thinking about the card placements of the last game.  He explains to Kanade and Komano that as a tournament goes on, it’s harder for your brain to forget than it is to remember the placement of cards.  The four of them intently watch the game and pray for Taichi’s success.  Meanwhile, Taichi is going over what cards have been read and which ones haven’t, which proves his incredible memorization skills.  As he goes over them, he seems to become more and more desperate as time goes on and wills his hands to move faster with each card that’s read.  While Taichi is figuring out what his next move is, Komano is watching Taichi intently, but is surprised with Chihaya suddenly grabs his hand.  He looks at her and realizes that she’s really worried about Taichi and needed some sort of  reassurance that Taichi will be alright, even if it’s silent reassurance.  He then looks over at Kanade and grasps her hand; Kanade is surprised but squeezes his hand back.  She then reaches for Nishida’s hand, but he’s so intent on watching the game that she shyly retracts her hand.

The game continues but alas, despite his efforts, Taichi doesn’t win.  He finishes roughly three cards behind his opponent, but the fact that he wasn’t fast enough and couldn’t concentrate was the deciding factor.  His opponent is enthusiastic that he won, but doesn’t rub it in Taichi’s face at all.  However, Taichi starts to tear up a little bit since the defeat really hurt him on an emotional level, but he quickly wipes away his tears because he doesn’t want his team to see him crying.  He looks over and everyone is collapsed on the floor, sobbing (Taichi thinks that he’s finally seen what real disappointment looks like) but it’s Nishida that makes him feel a little bit better.  Even while sobbing, Nishida is telling Taichi that he understands how frustrating it is to come in second at a tournament and how bitter the loss is.  This causes Taichi to start tearing up again, but they need to head upstairs for the award presentations.  Throughout the award ceremony, no one on the team says anything to their teammates and their teacher notices this.  She comments on how even though none of them were able to win, they aren’t consoling one another about their losses either.  This seems to make her proud of the club and more determined to see them win the next year.  After everything is said and done, they’re on their way to the train station to head back to Tokyo when Chihaya suddenly stops at the temple and bows, as if showing her thanks.  Everyone else – their teacher included – follows suit and they all head home.  Once they’re back in Tokyo, they devise a plan.  During their summer vacation, they’re going to start running in order to increase their endurance and stamina so that they can play for 11 hours straight at tournaments.  The teacher that was supposed to go with them to the tournament in the first place notices them and is shocked to see that it’s the karuta club, not the track team like he thought.  The club’s adviser is a bit smug about his surprise and taunts him about it.  Meanwhile, we see Arata approaching a building and looking rather unsure of himself.  A balding man greets him and says that it’s good to see him again after so long. 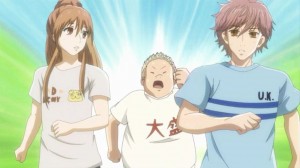 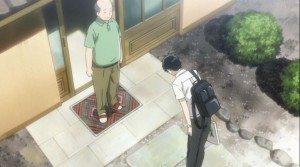 Opinions:  This was a pretty decent episode.  We got to see the end of Chihaya’s match with Shinobu – and let’s face it, we all knew she wasn’t going to win.  Shinobu is just too good.  It was still a good turning point for Chihaya though; she realizes that she still needs to practice and improve her game if she’s ever going to become Queen of karuta.  The fact that Shinobu was so mad about Chihaya managing to take five whole cards from her was interesting; it’s almost like she’s never had to fight that hard for her cards before or something.  Seeing how their newfound rivalry pans out will be interesting to watch.  Taichi’s match was both emotional and interesting to watch.  It’s as if Taichi realized what his strengths and weaknesses in karuta were but continued to push himself in order to get better.  The sense of unity amongst Chihaya’s team was nice to watch as well.  I’m glad that the fact that no one on their team won during the tournament didn’t completely destroy the momentum they had going.  In fact, it seems like it’s only made them more determined to compete and get better at the game.  I’m also really excited about the fact that Arata seems to be rejoining with his old teacher for karuta.  All in all, it feels like we’ve ended on “arc” and are moving on to the next one.  I wonder if we’ll have a time jump to when the next set of tournaments roll around or if we’ll keep going at the pace we’ve been going for the whole series.  Either way, I think it’ll be a good second half to the series.