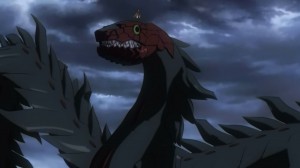 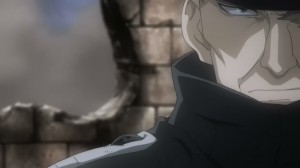 Well this was one wild episode. A new episode kicked off what was a pretty intense episode, especially by the end. We finally got to hear Yuji’s grand scheme for the world the results of announcing this scheme was utterly horrifying. Forget fighting back in a grand last stand, but I really wonder what the heck the Flame Haze are going to do to even survive this retreat. Right now things seem completely hopeless for the lead characters. If it wasn’t for some scenes in that OP you really might wonder how things would turn out.

I’m just glad that we finally got to hear the scheme and now it can be thought about. Of course it’s hard to fully judge it since personally I have a lot of questions about this plan. First of all Yuji/Serpent talked a lot about copying the world, but what exactly does that entail? They just going to copy buildings/ground/water/etc? Or is it going to go a step further with animals? Finally the biggest question is if he’s going to copy all the people in the world? After all the problem with the Tomogara isn’t them not having space for themselves. The problem is they go around eating the existence of people to sustain themselves. Is he going to change the laws of that world? If not where will he get all the energy to support them? If it does involve copying people does that really make this a better solution. Maybe if one is selfish and says “screw some clone of mine.” Guess the question would be if Yuji was so selfish to want to walk peacefully with Shana that he’d condemn a whole world to an utter hell. 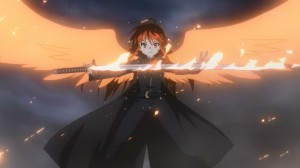 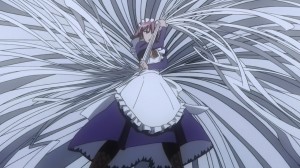 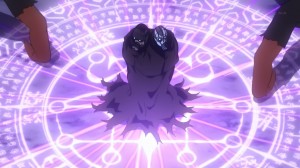 It was the smart move to focus on retreating at that point. The Tomogara were way too excited about their leader appearing and the Trinity was back on top of it. There was just no point of continuing a battle when the momentum had gone that far in the other direction. The important thing for them was to fall back and consider how to strike back against Yuji and the Serpent. Have to assume they aren’t going to cooperate or else we wouldn’t have much of a series. Plus I’ll rely on the doubts that Shana had. The plan all sounds good, but the devil is in the details. Unfortunately even retreating isn’t a simple thing when against that kind of force and especially the hellish nature of Yuji’s mental warfare.

Have to say it is fun to watch the team of Rebecca and Khamsin. They really do manage to compliment each other’s abilities just fine. Rebecca can handle the speedy and mass attacks that would be frustrating for Khamsin to deal with. On the other hand Khamsin can just stomp the slower enemies or those that have been disabled XD. Besides have to respect how much fun Rebecca can have out there. 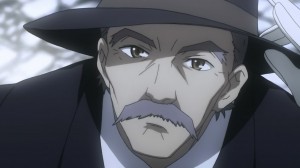 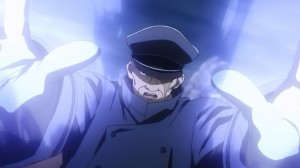 Then of course everything just fell apart despite the valiant struggle Shana and the others have been putting forward. I can respect Yuji’s feelings towards people getting erased without a memory being left behind. A good flashback to Hirai Yukari who died way back in the first episode of the first season. Someone that no one but Yuji will ever remember existed. But I still want to slug him in the face since he can think like that and then say things that get all those Flame Haze slaughtered. Just like with Margery he uses their motivations against them to leave them panicked and vulnerable. Though perhaps it just shows how he has given up on the world. Yuji/Serpent talk a lot about peace, but he doesn’t tell his forces to stop their assault with the Flame Haze retreating. He makes them feel worthless and as if their existence doesn’t matter anymore before having them slaughtered. You just can’t trust someone that can and would do that. This is the danger of picking up people who desperately want revenge and fight based on that hate for Tomogara. You take away their very motivation and they crumble. Those who have deeper beliefs can continue to fight, but that number is terribly smaller than the already overwhelmed Flame Haze forces.

But hey we got a new OP, XD. This was actually a pretty good OP and certainly an improvement over the last one. Certainly a very ShanaxYuji OP, but it wasn’t like the other characters felt neglected. You got flashes of the various characters like MargeryxSatou, Carmel, and a somewhat concerning image of Yoshida. I can say any time they show something like Yoshida clutching that hougu she got from Pheles it makes me worried that she will not survive. Though I can’t see a good reason for her to sacrifice herself since Yuji has gone this far for Shana. It was a pretty upbeat OP in terms of music which I prefer since it gets you hyped up for the episode. Liked a few flashbacks they threw in there and showed the bonds between characters. It gives me optimism that this second half of the final season will be something to remember. 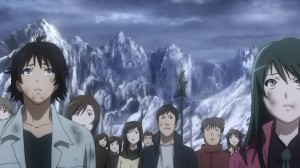 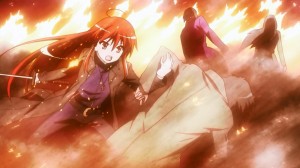 This was one crazy episode for sure. I had a feeling retreat wasn’t going to be simple, but had no idea it would turn into such chaos. Yuji definitely got his message out there, but not like he’s convinced everyone. I’m sure after watching their comrades getting slaughtered, Shana’s group isn’t going to be so willing to just accept this. Should be quite the episode though to see them try and get out of there.
Score: A+