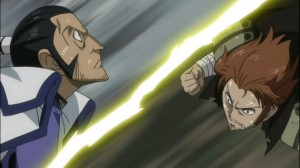 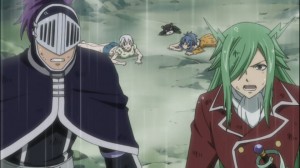 After last week’s slightly disappointing focus on Cana, Fairy Tail dives right back into form with the latest string of battles, and a very doom and gloom horizon on the forefront. For a second there, it seemed like Fairy Tail was going to dive into the dreaded pit of no return. I am of course, referring to a filler arc. Luckily, it seems to have been nothing more than a flash forward of sorts. If there is one sad part about this episode, its that it ends a bit too quickly, and leaves you wanting a lot more.

I’ve got to hand it to Fairy Tail’s latest arc, every time the heroes seem to be gaining some ground, boom! Another curve ball by the villains and the situation is horribly grim again. Thus was the case this week, where we had the highly capable Gildarts, along with Bickslow and Freed come to the rescue. 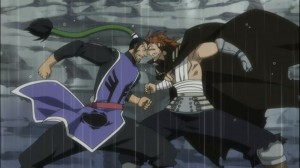 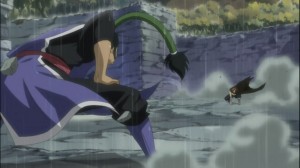 Man… The Gildarts battle with Bluenote, however short lived, was exceedingly friggin awesome. It really did feel like two giants duking it out, and they seemed very evenly matched. In fact, I might even venture to state that Gildarts might’ve slightly edged out a victory if things had gone on for a bit longer.

It was interesting to note, Gildarts was super uber pissed. And why wouldn’t the guy be? More than any of the others, he had really put his all into raising up the next generation of Fairy Tail. I think one thing that Gildarts raised, makes me suspect he might know Cana’s intentions, if even a little bit? The whole talk about how “The young ones were looking forward to this even more than us adults realized” was quite an interesting choice of words.

Of course, for however much Gildarts continued to dominate over Bluenote, there was the pressing issue of Rustyrose attacking the camp. As expected, Lisanna, Lily and Levi weren’t able to handle him, and were saved by the intervention of none other than: 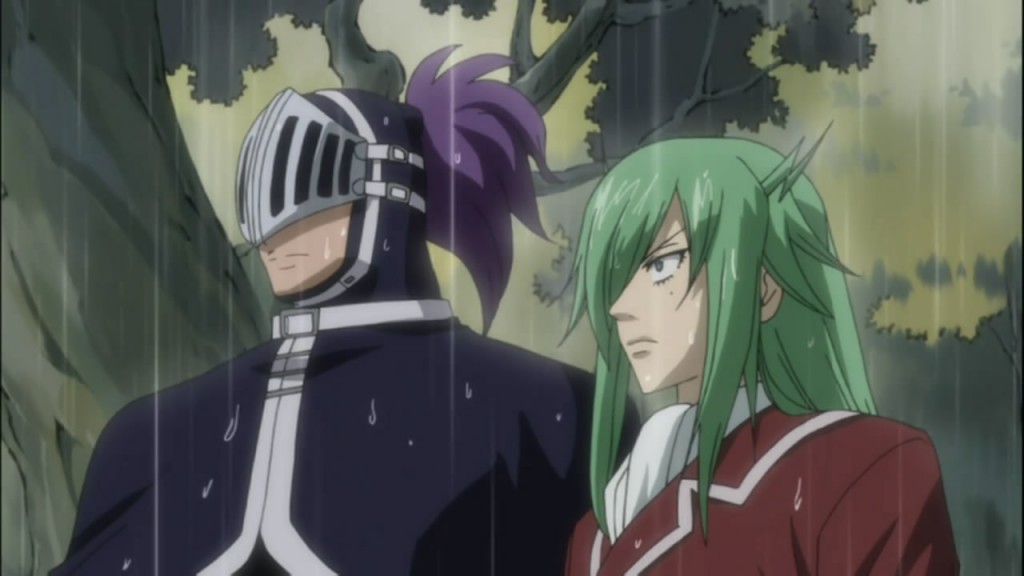 Oh boy, I actually must confess to thinking that it was Gajeel that had gotten up again when Rusty Rose  was sent flying. It turned out to be Bickslow and Freed though. Now, earlier, I had wondered if there was anyone who could stand up to Rusty Rose, and then it hit me with this arrival. Freed is the perfect counter measure to Rusty’s imagination. With Freed’s runes, the sky is just about as much of a limit as anything, which makes him the perfect guy to take down RustyRose, and with Bickslow at his side, it was only a matter of time before Rusty Rose was taken down. 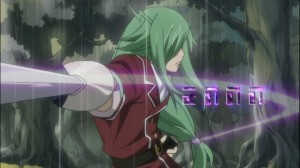 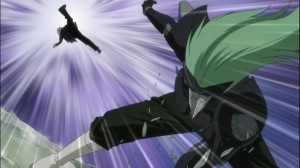 Now I’ll digress a bit, because at around this point, we got the “flash forward” with what I’m thinking is Makao’s son, and I shuddered when I thought that this was the start of a filler arc. Given that Bleach has done this a few times, it’s not unheard of for a series to suddenly pause the action at some of the most intense moments and throw some fillers your way. I seriously, seriously believed that that was the case, and tbh, It would’ve really hurt Fairy Tail if it had happened. 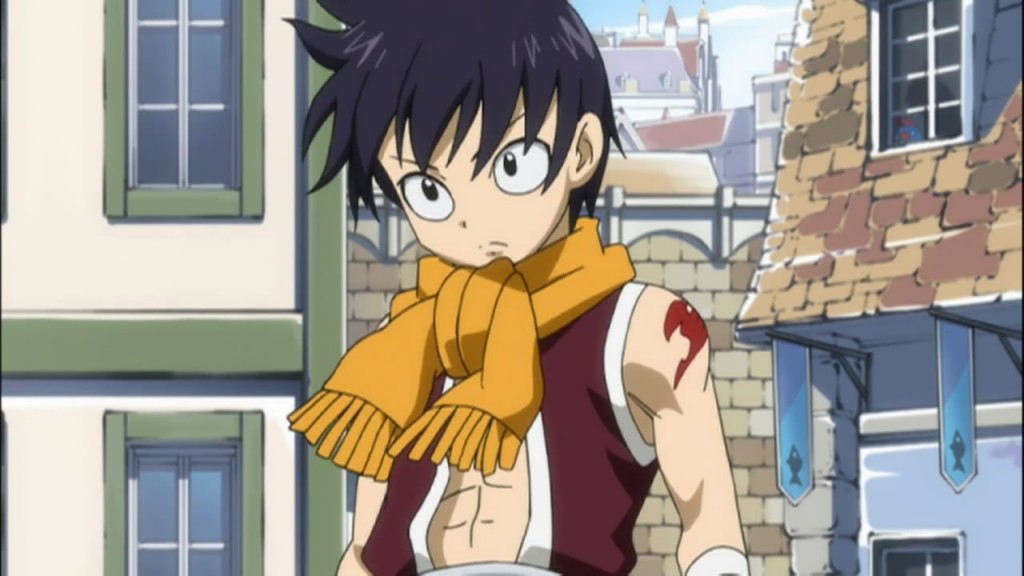 Thankfully, we dove right back into the action. Before that though, I heard the ominious naration from Lucy that Fairy Tail had thought it would win. Now I’m not sure what happens, but it doesn’t seem like Fairy Tail is going to lose just yet. Yet those deceiving words make it sound like Fairy Tail does indeed lose to Grimoire Heart. Either way, no spoilers from those who’ve read the manga regarding this please! XD 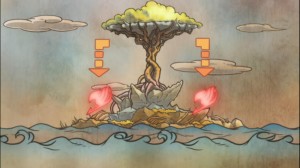 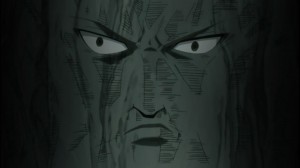 That said, just as it seemed like everyone from Fairy Tail was going to win, along came Purehito’s ultimate plan. By using Azuma, he was able to remove the blessing of Fairy Tail’s sacred Island, be taking out the Tenrou Tree. It was interesting to learn that the members of Fairy Tail couldn’t die on Tenroujima, mostly because the Tree amplifies their magic power and gives them protection. With that taken away, however, Fairy Tail could be technically defeated. But it got much worse, Azuma pretty much drained everyone’s magic power out of them…

Of course, like all villains, Azuma’s selfish interests came first, and he left Erza as she was, in order to fight a strong opponent. It was at this point, that Grimoire Heart pretty much lose the battle in my eyes. Azuma had the ultimate weapon, and he choose to give Erza of all people a chance. Not only that, he put her friends on the line, which is when Erza is strongest. 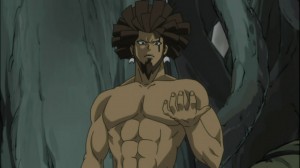 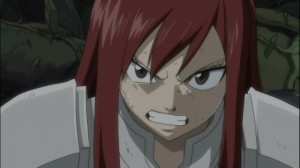 Thus, while everyone else’s fights have all paused, with every Fairy Tail mage in a  rather life threatenning situation, it seems that everything now rests on Erza’s battle with Azuma. Should she win, the battle will flow back towards Fairy Tail’s favor. And if not, well then, I guess Fairy Tail might actually lose. Either way, this was a rather exciting episode and an interesting turn of events.

Also as a special note, Crunchyroll has begun offering most of their Anime simulcasts in 1080p true HD. Given that Crunchyroll is where I watch this series and blog it from, this is just waay too awesome. So a special thanks and kudos to them for doing so! 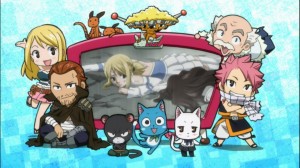 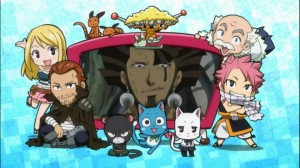 Everyone else seems to be struggling, while Azuma has that twisted look on his face as he enjoys his battle with Erza. See ya all next week! =D