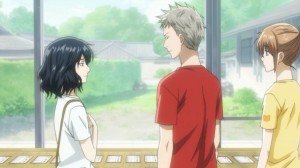 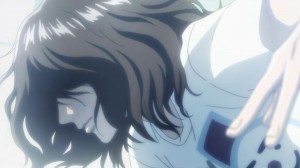 So it appears that ANN was actually wrong; it looks like we’re going to be getting about 22 episode of Chihaya!  That’s actually somewhat exciting since we’re still at Omi Jingu and there’s still a few things to sort out regarding this whole Chihaya/Taichi/Arata love triangle.  Either way, let’s find out what happens!  The episode starts off with everyone preparing for the individual tournaments.  Nishima and Komano are thanking their lucky stars that Kanade said they don’t have to wear hakama for the individual tournament since it’s even hotter than it was the day before.  Chihaya is busy stretching and mentally preparing herself for the tournament when Taichi asks her if she’s feeling better and if she’s up to the tournament.  Chihaya reassures him that she’s fine, but before Taichi can say anything else their teacher shows up.  She gives them the run-down of the tournament; everyone is separated by class and everyone is to be considered their rivals.  Kanade and Komano are in the same class and both are determined to win, but it also seems more or less like a friendly rivalry between them.  Taichi and Nishida are both in Class B, so they’ll eventually be facing each other though Taichi seems a bit disappointed that he won’t be able to face Arata in a match since he’s Class A.  Chihaya seems determined to win the tournament and the group sets off for the temple.

Once they’re at the temple, they split up and head towards their designated area.  Chihaya is excited to see who she’ll be facing off against first, but is surprised to see Sudo standing beside her.  He told her not to be too worried about her opponents since it’s the Queen she needs to worry about.  This comes as a surprise to Chihaya, but suddenly people start whispering and she turns around to see the same girl she saw at the shrine walking towards her.  Apparently this girl, whose name is Shinobu Wakamiya, is the Queen of karuta.  Sudo gives Chihaya a brief history on Shinobu; according to him, she became a Class A player by the time she was 4 years old and became Queen of karuta before she even entered high school.  Chihaya is surprised to hear this but becomes tense when Shinobu approaches the table and actually speaks to Sudo.  It’s a short yet curt conversation where Shinobu tells Sudo that despite the fact he lost regionals and his team was unable to compete in the team tournament, she hopes that she’ll be able to face him in the individual tournament.  She then leaves after seeing who she’s playing first, but Sudo is enraged and says that he hopes he gets to wipe the floor with her.  Chihaya just seems intrigued by the Queen and as her first match starts, she hopes to finish her match quickly so that she can watch Shinobu play.  Of course, she becomes a few cards behind since she’s focusing more on speed than actual skill and she reprimands herself because every player in the room is a Class A player and she can’t afford to lose her concentration.  However, just a few rounds into the game, Shinobu is already done with her match which startles just about everyone in the room. 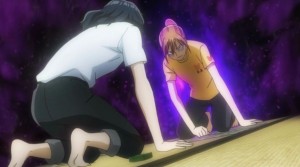 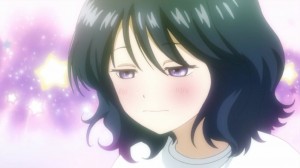 After her first match (which she won), Chihaya is standing at the table where they announce their next opponent and everyone is whispering about how they’re scared to face the Queen.  As the cards are laid out with their next matches, Chihaya keeps wavering between wanting to face Shinobu and not wanting to face her.  As her card is laid down, she becomes determined and prays that she’ll be able to play the Queen.  Her wish is granted and she suddenly becomes incredibly determined to win.  Just as the next match is announced, her teacher finds her and says that she borrowed a camcorder from Kanade’s mother and wants to film her.  She’s stunned by how determined Chihaya looks and quietly takes her place in the spectator’s area.  Meanwhile, downstairs, Taichi and Nishima have just finished their second match and Taichi is about to head upstairs when Nishima tells him that he should go downstairs and cheer on Kanade and Komano.  Taichi says that he wants to watch Chihaya play, so he ignores Nishama’s protests and heads upstairs, but is surprised and somewhat stunned that Chihaya is facing the Queen.  Meanwhile, the match is just about to start and Chihaya thanks whatever God there is for placing her right next to the reader because she’s close enough to hear the woman breathe.  Just when she thinks she has the upper hand on this, she’s stunned by the fact that Shinobu is able to take a card from her before the first syllable is even read.  Her teacher is confused and even with the recording, she isn’t sure what’s going on.  Taichi joins her and the two rewind the footage and watch it in slow motion.  They’re stunned to find that even in slow motion, the Queen’s arm is a massive blur.

Several rounds go like this, with Chihaya becoming even more overwhelmed with every card that’s taken from her.  She suddenly realizes that Shinobu plays using silent karuta, which reminds her a lot of Arata.  Taking a moment, she stands up and reassesses the situation, much like Sudo does (actually, he’s right behind her doing the same thing).  Once she sits back down, the two girls are momentarily distracted by each other’s shirts.  Shinobu is excited to see Chihaya wearing a shirt with her favorite character and Chihaya is jealous of the snowman shirt that Shinobu is wearing.  The two girls stare at each other for a moment, but they quickly get back down to business as the next card is read.  Over the next few rounds, Chihaya realizes that Shinobu put two cards together that she shouldn’t have and focuses just on those.  Unfortunately, Shinobu is able to block Chihaya’s attack and even take the correct card at the same time.  Chihaya seems to be really dejected since she’s behind by 15 cards or so and Shinobu reflects on how it’s always like this; her opponents start off wanting to give it their all, but halfway through the match it starts to be like playing karuta by herself.  This doesn’t seem to bother her.  Suddenly, Chihaya manages to get her determination back when she’s able to touch the same card as Shinobu, though she gives the girl the card anyway.  Because of this, Chihaya becomes incredibly focused and is able to take two one-syllable cards from Shinobu in a row.  This not only shocks the crowd and causes them to murmur to one another about how that’s never happened before, but it also seems to piss off Shinobu.  Chihaya is determined once again to give it her all against the Queen and Shinobu looks like she’s just about ready to crush Chihaya. 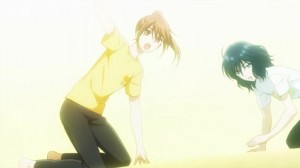 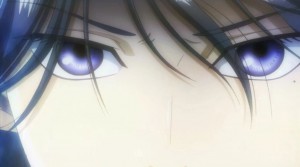 Opinions:  Even though there wasn’t a whole lot of action in this episode, it was incredibly tense for me to watch.  Just knowing that the Queen was there and she’s the same age as Chihaya was enough to put me on the edge of my seat.  The fact that Chihaya has to face her in just the second round of the tournament?  My mind is blown!  Taking that into consideration and the fact that Shinobu is a nearly silent karuta player and incredibly skilled, I was biting my nails throughout her match with Chihaya.  I literally cheered when Chihaya was able to take a card from her and I’m really interested in seeing how this match turns out in the end.  I hope Chihaya can beat her, but it’s hard to tell since she’s so far behind.  Regardless, next week seems like it’s going to be a really exciting episode to watch.  Though I wonder if Arata is going to be competing in the individual tournament.  He told Chihaya that he’d meet her next time in a match, but I didn’t see him anywhere during the tournament. 8|a