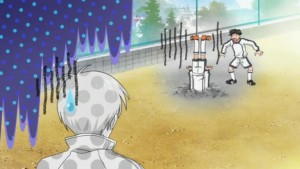 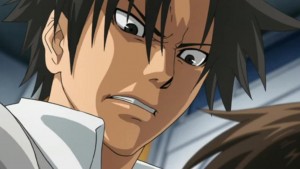 I was mainly interested in this because Inazuma Eleven turned out to be very exciting. And from the little I read about the series, it was the last push that made me decide to blog this… and Fukuyama Jun was the one who pushed me >u<  <3 <3 But anyway, asides from what I read from summaries, I don’t know much about this anime.

The OP wasn’t that great. It’s definitely one that I’ll skip over. Also, I couldn’t really find the beginning of the episode all that interesting. It wasn’t until I saw the cute little puppet show and the little bro that I began to enjoy the show. That little bro Kakeru is probably going to be my favorite character (and it’s not just because he’s cute, geez~) despite the fact that it’s his older brother who has Fukuyama Jun’s voice.  I never thought that  Suguru would be so scary! And Jun’s voice isn’t enough to make feel satisfied… maybe it’s because I get too scared from looking at Suguru’s eyes that I forget about the voice~

And talking about the characters~ When Kakeru’s childhood friend was introduced I found it so odd that a girl would be named “Seven.” But then I made the connection once she was formally introduced in class as Nana (Nana = Seven). I wonder if Kakeru has given up on Nana since she seems to like Suguru instead. And that leads me to wonder if there will be any romance in the future.

So Kakeru took the manager role since he can’t play as well as other because he can’t use his left leg. Kakeru obsesses over that role, I presume, mainly to forget about actually playing soccer and he may have convinced himself that being manager of the soccer team is enough for him. But even still, he sneaks out at night to play soccer by himself. But an alien happens to show up and starts playing with Kakeru XD It’s someone who knows about Kakeru’s injury but I don’t think it’s Suguru because the alien was too short to be him. I think it may be Nana or some other girl since the alien was sitting in a very girly style…

Whoever it is, that person was probably a person who influence the decision to make Kakeru a forward. I liked how Kakeru decided on his own to ultimately take the chance to play without having to actually be forced by someone or thing. I found it adorable how much Kakeru adores his brother <3 Suguru is concernced for Kakeru so that why he’s trying to push him to do his best (that’s called tough love) so I’m sure that Suguru will eventually become less scary XD

I wasn’t too impressed this episode but I’m sure once things start picking up that it’ll get exciting.

in Area no Kishi