Mawaru Penguindrum is one of the rarest breed of anime series to come out of the industry lately. It’s so undoubtedly weird and different, that analyzing and more so reviewing or recommending it is a challenge in itself.  Saying the cliche’ phrase “There’s nothing like it” is an understatement. The anime features a story that is akin to a journey. Its not just any journey either, its one of intense prodding and unearthing to discover some semblance of meaning. And at the end of it all, its quite difficult too discern what the whole journey meant anyway, after the 24 episodes that its spread across. Simply put, Mawaru penguindrum is so different, its worth watching that spectacle as it truly does some mind bending and unconventional things. Mind bending is definitely the key word for the series, as it hardly feels cohesive, nor does it have one particular theme, nor does it follow any of the other major rules that make any from of sequential storytelling let alone an anime series, great. 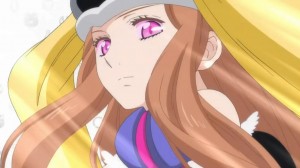 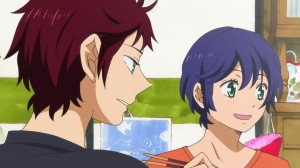 Penguindrum breaks every rule in the book, and is highly uncompromising but it does it with a sense of style and elegance. The series doesn’t care if you understand what’s going on, and continues forward, while using its characters, comedy or its various plot twists and mysteries to keep the viewer enticed. To narrow down one particular reason that makes this series so mesmerizing is just impossible.

There are tons of intertwining plots, characters arcs and moral and ethical themes present in this series. These various elements all mix, mesh and merge, creating a sort of chaotic entity of a series. The series tackles themes such as the idea of loss, the concept of having to fill someone else’s shoes, the loss that a child feels when their family starts to split up, the issues faced with abandonment and even the idea of child neglect. And of course, then there’s even the concept of fate and avoiding or changing it. Needless to say, the series tackles a lot, and it also takes on the notion of presenting some extremely deep and complex characters. 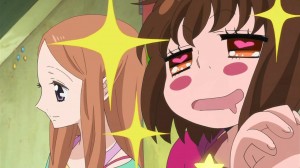 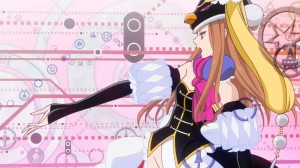 The story actually follows three siblings, Shouma, Himari and Kanba Takakaru. The three siblings live on their own, having lost their parents at an early age, and are now contending with the fact that Himari is stricken with an incurable disease. The series opens up with Himari’s death subsequent rebirth by a hat that she ends up being on a trip to aquarium. The hat seems to have a will of its own, and beckons her two brothers to find the Penguindrum or Himari will die. Things only proceed to get weirder from there, and revealing anything more would not only be a disservice to the series, but will also require pages upon pages of text. To add one more thing though, the quest for the Penguindrum puts Shouma and Kanba on a path that will fundamentally change them, reveal their past, their potential future, and impact the destiny of the many people they encounter.

As mentioned in the lengthy introduction, the story is a hugely complex and intense jumble of many different elements being balanced together. Alongside the extremely complex and often times very dark themes, there is some genuinely hilarious comedy, which is mostly concentrated in the first part of the series. The second part of the series really begins to focus on its themes, and really becomes more about its plot, which begins to really become complex and intense. 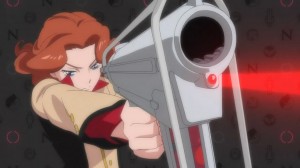 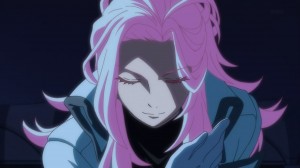 The big question then, is whether the whole thing pays off in the end? And unfortunately the answer to that question isn’t quite that simple either. The ending is definitely present, and can give you a decent amount of closure. At the same time it doesn’t tackle or answer every question to unravel everything and present a truly conclusive ending.

The series, for all the strife it puts you through to understand it, never really gives you a clear ot conclusive answer. The viewier is left to infer whatever meaning they can to the ending, without any clear indication of whether they are right or wrong. Whether this is a good or bad thing, really depends on what your tastes are.

Do you like series with complex, thoughout provoking ideas that will make you think, think and then think some more? Then this is the series that’s been hand crafted for you. If you enjoy complex stories that all tend to make sense in the end and neatly resolve from a well designed plot, then this series will leave you largely unsatisfied. 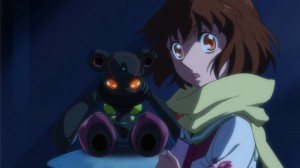 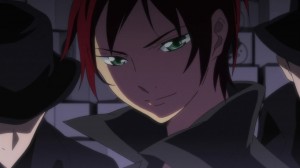 It’s a tragedy, but the later will probably be the case more often than not. Despite the controversial story, The artwork, the complex and jaw dropping animation and visual style are all exceedingly well done in this show. Everything from the graphic design for the logo of the Penguins, to the complex animation that presents itself during the “survival Strategy”. Everything visually really just awes and even makes you wonder what the animation team and director were smoking when they came up with some of the more crazy scenes in this series.

The sound work holds up nicely alongside the visuals. The OP/ED themes leave a bit to be desired, but the soundtrack and background music is pretty well done, and really creates some great atmosphere for the extremely complex story and characters. The voice work for the series is also amazing, and given how complex, twisted and wordy the dialogue is, that’s no small feat. 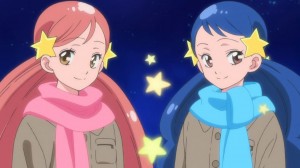 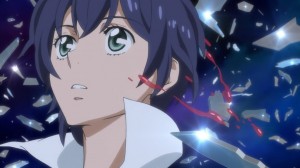 All in all, it’s safe to say that there is quite absolutely nothing like Mawaru Penguindrum. It’s unclear whether it’s a work of art as far as multi-layered storytelling goes, or whether its just a choatic jumbled mess of too much being attempted at once. While its hard to recommend the show for its complex and perhaps convoluted story or characters, it is beyond easy to recommend for just how unique and different the series is. If you enjoy thought provoking series that let you draw your conclusions, then Mawaru Penguindrum is the best you’ll ever see. We award it with a B+ for everything it tries to do and nearly succeeds at.