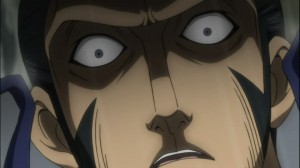 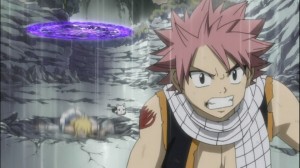 After what seems like forever, Fairy Tail is back from its one week hiatus, with a brand new OP  and ED to boot. Its surprising therefore, that this is perhaps one of the weaker episodes in a series filled with amazingly awesome story and character moments. The Cana story comes to a head this time, with inevitable distaste  that was soon to follow.

Fairy Tail is a series where the bad characters often turn over a new leaf after they lose and are just decently redeemable. The pattern works rather well, with some really cool characters such as Gajeel and the eventual Laxus being shown in the series. After all, the only thing cooler than a fallen hero, is a villain that tries to become a hero. Its the reason Jellal was also one of the most endearing characters in the show. 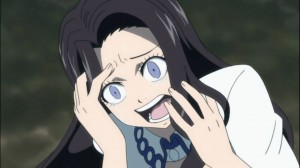 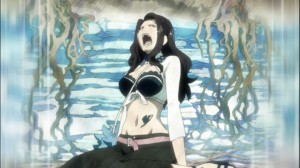 That said, despite a very heartfelt attempt at making Cana seem redeemable, it just didn’t work, in my opinion. Cana has been act like a selfish idiot for far too long, that her change of heart in this episode, as well as her power up, along with her backstory, did nothing to make me like her, or feel any form of sympathy.

For the entire time since the attack on Fairy Tail, Cana has been screwing over her friends, and what does she get? Two seconds of regret and then the most powerful spell the guild has to offer? Argh! Totally totally not cool. What are we seeing her? That being selfish and self centered and betraying your friends is okay as long as you admit you’re wrong in the end?

That is really pushing it. But let me pause on my Cana bashing for a second, lets look back at Cana’s backstory. Cana ends up being the daughter of Gildarts, and has since childhood, failed to tell him. There are so many things wrong with this little backstory that I don’t know where to begin. 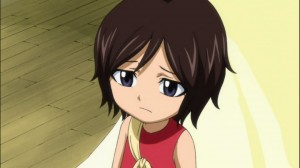 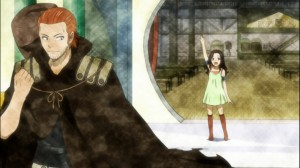 First of all, Cana has aged significantly since she came to Fairy Tail, yet Gildarts looks the same since when he met her as a kid. Given that Cana is at least old enough to drink, she’s 18 at the very least. Its very difficult to imagine Gildarts wouldn’t age a touch. Secondly, the fact that Gildarts never had a proper conversation with Cana even though he was so darn close to Natsu and Lisanna makes no sense. He clearly had a lot of chances, and I refuse to believe that Cana had no chance whatsoever to tell him she was his daughter. All this does is make her seem extremely stupid.

It wasn’t all bad, though, I admit. I can see the immense pressure that Cana might have felt from being the daughter of the number one Mage of the Guild. Added to that, she had to come up against intense monsters like Erza, Laxus and Mirajane. If Gray and Natsu had taken on any of those three, they would’ve lost too. The pain she must’ve felt was genuine, especially given that Erza and Mira joined after her.

STILL… that hardly justifies her behavior. We also find out that Cana gave a card to Lucy in case she ever ran into trouble, and it seems that Cana all but forgot about it until she realized what an idiot she was. I do commend her for recognizing that she had betrayed her friends. The fact that she uttered those words at least points to the fact that she does at least realize what she did. 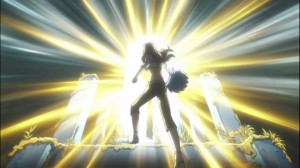 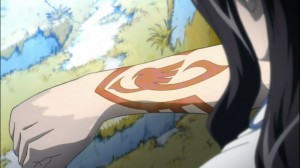 I still can’t wrap my head around the idea that Fairy Glitter was actually given to her by Mavis. Also, interesting fact, Mavis is most definitely female, something I hadn’t even considered. I honestly think it makes a lot more sense though, and the fact that Fairy Tail was actually started by a woman is just beyond kickass. Instant respect points for Mavis right there, and I don’t mean to sound sexist or anything. Its rare for women to take the spot light like that, and yet Fairy tail is a series that did just that. I’m very appreciative of the fact. 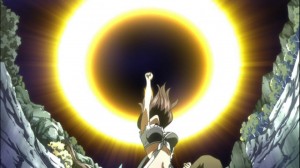 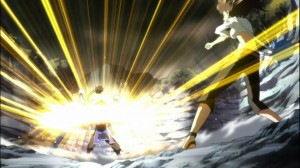 That said, for all the talk Cana made, she still wasn’t able to effectively use Fairy Glitter, and it was up to Gildarts to step up and save the day. I must say, it was exceedingly badass of him to just rush in like that. I’m quite excited for his battle with Bluenote. It was ironic that Bluenote was complaining about not being to “fly” right before Gildarts came in and sent him flying. XD 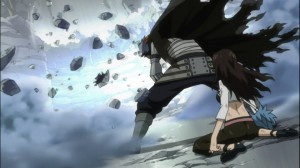 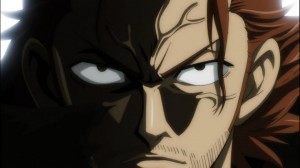 Overall, I have to say, while the episode had its fair share of plot twists, and made a grand attempt to redeem Cana, I just found the whole thing a bit lacking. Cana had gone so far that I just couldn’t forgive her, and I’m glad that her role is over. I’m excited to see the rest of the battles, as well as other things that have been hinted at in the OP. 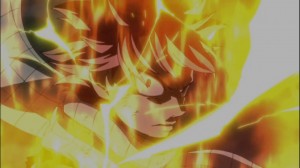 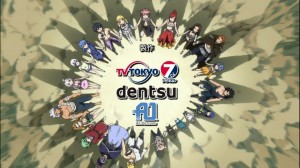 Ah, something I feared, another “Rock City Boy” esque’ OP theme song. After the extremely amazing OP last time, this one just can’t seem to not dissapoint. Its a bit too light-hearted and Happy go lucky (no pun intended XD). The song is just not very catchy or interesting, which is sad, because the animation is superbly awesome. There’s some serious hints on what is to come, starting from the fight between Bluenote and Gildarts, to the battle with Purehito, to the return of Laxus. There’s also hints of a possible filler arc after this one concludes, with Makov’s son being rhe main character. All in all, the animation definitely has me excited for what’s to come, but as an OP that I’d lik to listen to everytime before an episode, this one leaves a lot to be desired. 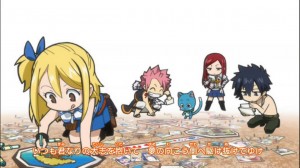 Much like the OP, The ED is a bit underwhelming. Its not bad per say, the animation is nice and cute, but the song is just, once again, too fun and light-hearted for my tastes. The song just doesn’t speak to me, and while I’m sure it’ll grow on me, I really miss the last one, which was pretty darn good. All in all, I suppose I’ll be skipping this as well, as well animated as it is. 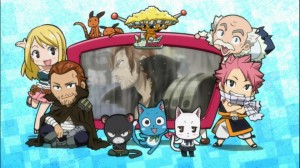 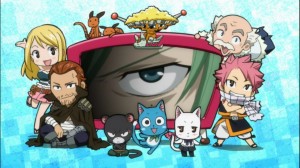 The big battles rage on, as we dive into more Gildarts versus Bluenote, tackle some Erza versus Azuma and even get the return of two characters! See ya all next week! =D