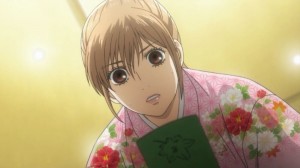 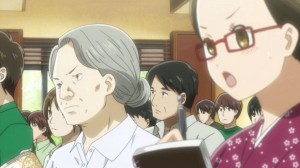 After a week-long break (I’m assuming because of the holidays), we finally get to find out what happens to Chihaya and company at Omi Jingu.  The episode starts off with everyone staring at the shrine in awe before being hauled off to the temple to say their thanks and pray to the Gods.  Their adviser instructs them on the proper way to pray and give their thanks, reminding them that though it may seem like a trivial thing to them, it’s not always viewed that way by the gods.  Everyone does as instructed and all that Chihaya prays for is that everyone remains in good health and that no accidents happen to any of them so that they’re all able to play.  Just as she finishes her prayer, something seems to touch her, though she’s not sure what it is.  As the group leaves the temple, Chihaya swears that she sees someone walk past her, but no one else sees the girl.  Talk about strange.  Later that day, Kanade and her mother are helping everyone get into their hakama, though everyone is complaining about it being too hot to wear a hakama.  Kanade scolds everyone and tells them that they need to suck it up and deal because they have to look presentable in their first national tournament.

As they’re getting ready, Nishima notices that the groups have already been announced and everyone is happy to see that they haven’t been paired with any of the really tough schools yet.  While everyone is discussing their line up, the group’s adviser notices that while Chihaya isn’t moving or saying anything, she’s actually quite pretty.  Taichi notices that Chihaya is spacing out and asks her if she’s alright and she says that everything is fine.  Once the match starts, the group realizes that they guessed wrong in terms of their placement, but they try to focus on their match instead of worrying about how strong their opponent is.  The card reader announces the time to place their cards and as Chihaya is doing so, everything seems to be going in and out of focus for her, which is incredibly alarming.  However, she tries to ignore it and focuses on setting up her cards.  As everyone is memorizing their cards, we get a glimpse of the team’s adviser and Kanade’s mother who are watching anxiously.  Their adviser is actually worrying about how strong their opponents are and whether they’ll be able to make it to the finals while Kanade’s mother is literally checking out boys and taking notes (likely for her next line of hakama and kimono).  As the first cards are read, everyone loses their card and Taichi tries to get everyone to relax by reminding them to take it one card at a time.  This seems to help everyone except Chihaya, who is too far gone to be reached by Taichi’s words. 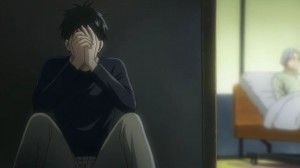 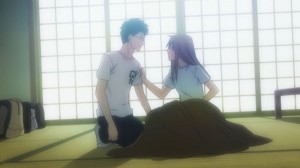 While everyone is trying to get a handle on their match, we see Arata getting out of the train station near Omi Jingu.  As he makes his way there, he realizes he went the wrong way and mentally scolds himself since he’s been there so many times before.  Then he remembers that he always traveled by car before and we get a nice look at what happened to Arata and his grandfather since he moved back to Fukui.  At first, when Arata visits his grandfather in the hospital after his stroke, he’s shocked at the state he’s been left in, but reminds himself that his grandfather is still his grandfather and nothing will ever change that.  We then see a small montage of Arata when he’s a kid and his grandfather, who is still actively enthusiastic about karuta and still wants to coach Arata.  It’s all extremely touching, especially when Arata’s grandfather tells him that someday he’ll be a Master and that he just needs to imagine himself up on that stage and everything will fall into place.  As the years pass, Arata’s in middle school and comes home to find that his grandfather has been admitted to the hospital for another stroke.  At first he’s worried but tries to shrug it off because it’s just a small relapse.  Or so he thinks.  As he goes to visit his grandfather and ask him how he’s doing, he’s shocked to find that his grandfather doesn’t even remember him.  The doctor tells Arata and his family that his grandfather has early dementia and that it’ll be harder for him to remember things from then on.  Everyone tries to make the best of it, especially Arata.  He shows his grandfather karuta cards and asks him if he remembers the cards at all.  He’s devastated when he finds that his grandfather doesn’t remember any of them.

The day that his grandfather passes away is the most touching.  Arata agrees to miss his karuta tournament in order to stay home and watch his grandfather while his dad is at work and his mom attends a reunion meeting for her old school.  At first he doesn’t mind it, but his grandfather has a rare moment of lucidity and scolds him for missing the tournament.  When his grandfather encourages him to go to the tournament, Arata does but…well, we all know what happened.  After finally seeing what really happened and why Arata quit playing karuta, we go back to Chihaya and the others.  Arata walks into the building and is surprised to see Taichi and Chihaya trying their hardest.  Chihaya is desperately trying to hold on, but ends up fainting before the match is over.  Taichi catches her and tells the judge that she forfeits and ends up handing her off to Arata after the two run into one another.  Kanade’s mother instructs Arata to take her to the sitting area and he does so.  Chihaya wakes up to Arata watching over her and realizes that she was in the middle of a match.  Arata stops her when she tries to leave and rejoin the group, which frustrates Chihaya to the point where she starts to cry.  When she wakes up later that night to someone knocking on her hotel room door, she’s surprised to see Sudo from the school they faced in the finals back in Tokyo at her door.  Turns out, he’s there to participate in the individual championship, but he’s scolding Chihaya for letting all of Tokyo down with her forfeit.  Taichi and the others show up and tell Sudo to back off since it wasn’t Chihaya’s fault.  Chihaya  apologizes to them, but they tell her not to worry about it.  Komano ended up winning two matches in a row and the group as a whole made it to the playoffs, but were quickly beaten after that.  Through their excitement, they realize that Chihaya still needs her rest and Taichi helps her back to bed.  When he gets there, he teases her a little before giving her a package that Arata left for her.  It seems to be a kimono with the note that Arata will see Chihaya in a match.  Chihaya is moved to tears and we seem to finally have some closure on the whole situation with Arata. 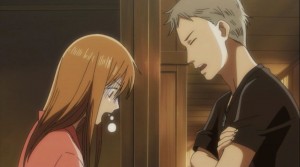 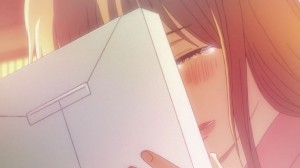 Opinions:  According to Anime News Network, this is supposed to be the finale of the series.  In a way, it felt like a finale, but it also didn’t in a way.  I guess we’ll have to wait and see if another episode is released next week or not.  If, in fact, it is the finale, it was a pretty decent episode.  We finally got to see Arata’s side of things pertaining to his grandfather and why he quit playing karuta.  It was a really moving montage of moments between himself and his grandfather, which was made all the more poignant by the fact that his grandfather encouraged him to go play karuta on the day of his death.  Seeing Arata finally come to terms with his guilt and realize that he still loves karuta more than anything was great to see, though it was partially helped by a staff member of the tournament (I didn’t mention this in the actual review, but he told Arata he was excited to see him play because it meant he got to watch his grandfather play again).  However, seeing Chihaya so overwhelmed that she fainted and had to withdraw from the whole competition was worrisome.  And who was that girl that walked past her at the temple?  Perhaps it was the spirit of karuta itself?  Either way, it provided for a lot of drama in the episode.  If there is additional episodes after this, it’ll be interesting to see where they plan on going with it.  If they don’t have any more episodes, at least it was a decent episode with a fair amount of closure.