Due to circumstances beyond my control, I was unable to blog Fate/Zero weekly as I originally intended. This was quite unfortunate, as this series is definitely one of the strongest series to come out this season. It was also one of the few series that gave a considerable amount of content per  episode. What is extremely interesting, is that while on a per episode basis, the content felt plentiful, Part 1 of the series itself felt kind of lacking in terms of plot progression. In a sense, Part 1 of Fate/Zero really just developed some really intricate and complex relationships between all the players before the big decisive moments of the Holy Grail war begin.

As such, there are a few moments of note that I’d like stress on before Part 2, which I fully intend to blog regularly on an episode basis.

The first, has got to be the fact that Kayneth was royally screwed by everyone. Not only that, we also got to see Kiritsurgu’s ultimate trumpt card. I’m going to call them soul bullets, because that’s what they essentially are. He’s got a bit of himself in those bullets, and said bullets then seem to carry his will. The effect those bullets have though, is extremely deadly, and it totally makes sense that Kiritsurgu is a Mage Killer. 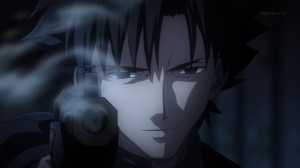 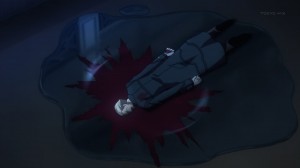 With his ultimate bullet, Kiritsurgu ultimately put Kayneth out of comission, even if he couldn’t deliver the final finishing blow. Kayneth survived due to Saber letting Lancer go (more on that later), but he didn’t wake up to the best of moments. 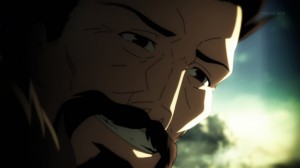 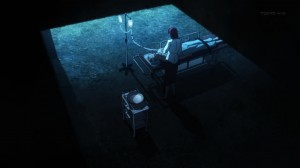 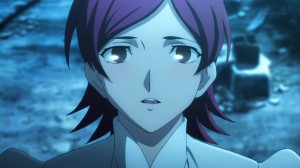 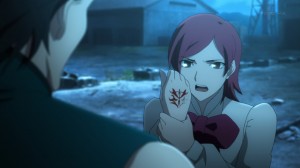 His woman, who CLEARLY has the hots for Lancer, makes him give up his command spells. Lancer, who already betrayed his first master/lord as a Knight, is having to go through the same fate twice. It makes sense that Lancer doesn’t want to repeat the same mistake twice, but Sola-Aoi is hardly one to be denied what she wants. I can see this really blowing up in her face when Lancer finds out the truth behind how she got the command spells.

The second thing I really want to touch upon is how much of a complete and utter idiot Saber has been throughout. I can see now that Kiritsurgu has been dealt a sevearly bad hand as far as servants go. Saber is naive, idealistic and stubborn, something that makes her a perfect companion and partner for Emiya Shirou in the next war, but as far as Kiritsurgu goes, she’s completely useless. Her ideals, her sense of self, and her way of doing things, all suffer utter and complete defeat from everyone she faces. 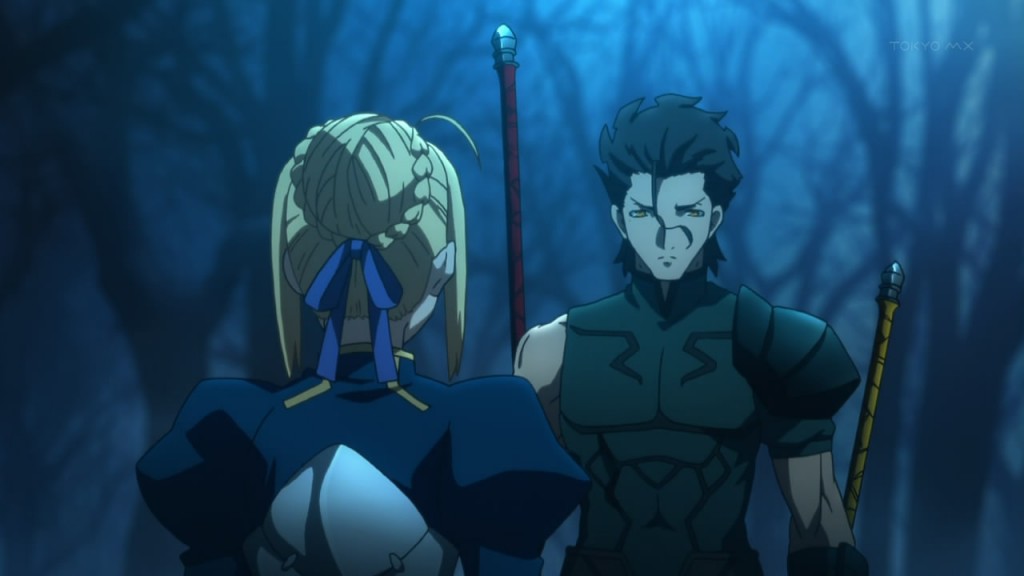 Lets recap, shall we? Saber has lost the use of one of her arms because of her battle with Lancer, and instead of battling the guy and getting that back, she allows him to run and get his MASTER? The union should have ended the minute Caster was dispatched by the both of them. Of course, Saber, who flaunts her naive sense of honor, allowed her own Master to come into danger because she allowed her enemy to leave and retrieve his master.

Kiritsurgu puts forth an excellent point when he mentions that Saber could’ve been betrayed by Lancer, and that would’ve ended the Holy Grail war for him and Irisviel. I don’t blame the guy for getting pissed off and deciding he needs to distance himself from Saber before she causes any more problems. Rather than stick to trying to control and uncontrollable loose cannon like Saber, it would be much better to be in the shadows, do things his own way.

Of course, Saber’s idioicy didn’t stop there, was she totally lost to Iskander/Rider in a battle of philosophies. The third major event, was the dialogue between the three kings. This dialogue wasn’t just entertaining, it was a true measure of awesome. When Aurther Pendragon and Alexander the Great’s philosophies clash, this is exactly the sort of conversation I’d expect. Of course, Saber isn’t exactly the best representation of Aurther Pendragon’s ideals, but it was a pretty decent enough of model to work with. 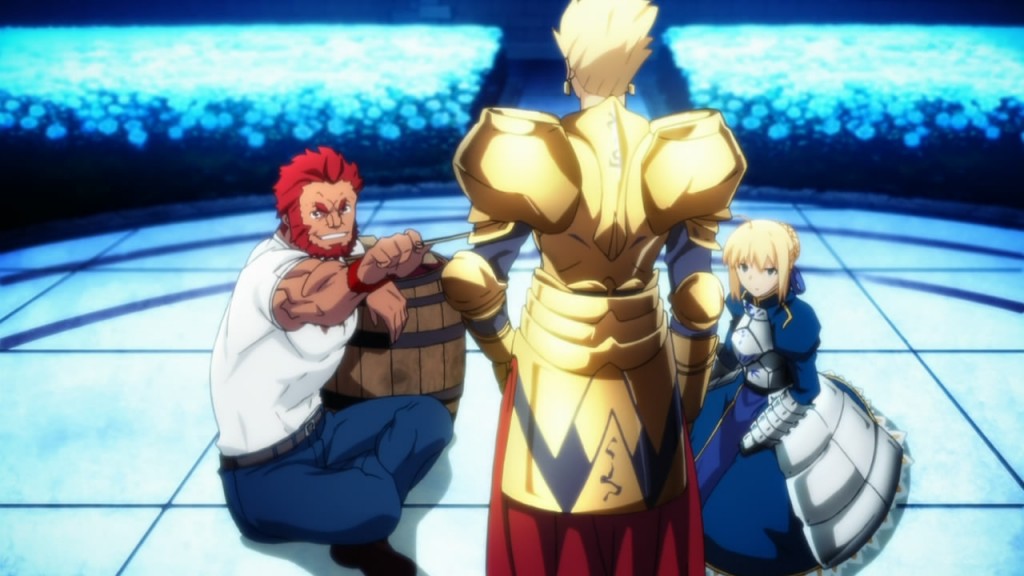 A Drinking of Kings!

I loved clearly Rider identified everything wrong with Saber’s way of Ruling, and her way of trying to save others without caring about herself. This is something that Shirou has to eventually deal with and possibly fix (depends on the ending you get) but it really shows the flaw in Saber as a King. Sure, with her immeasurable power and abilities, she can save her people a few times, but without the guidance to be able to stand up for themselves, and without teaching them to survive, she was going to loose eventually.

In contrast, I have to say, that Iskander/Rider was the mark of a true king. I  mean, just LOOK at the guy’s noble Phantasm: 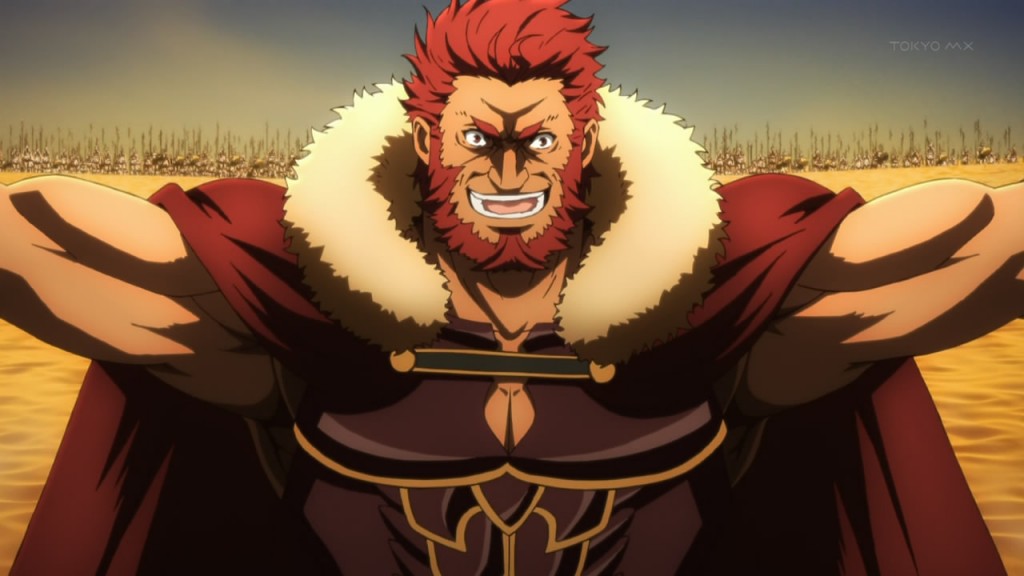 Rider's Noble Phantasm is a friggin Army of Servants!

If Gilgamesh has a reality marble with all the treasures he collected, Friggin Rider has an army of HEROES! O_O 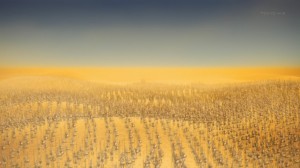 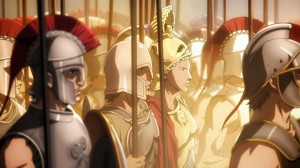 I have to say, Rider definitely wins in terms of sheer strength and even terms of philosophy. He’s different from both Gilgamesh and Saber, in that he’s a true leader with a proper army. He didn’t just make himself great, he made his followers into true heroes. Given that neither of Saber or Gilgamesh’s followers appear to follow them after death, they lose to Iskander’s awesome.

Of course, when Rider showed everyone his Noble Phantasm, he also dispatched Kotome Kirie’s legion of Assasins. Kirie, is hardly done though, and after that exchange between him and Gilgamesh, its safe to say that he’s started on the path towards what he’ll eventually become. 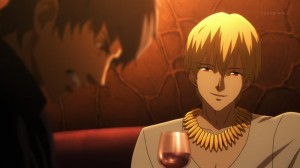 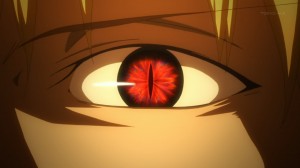 It truly has be magnificent to watch how Gilgamesh has slowly but surely warped the confused Kotome Kirie into someone as evil and twisted as  possible he himself is.

The other major thing that’s been steadily developing is the partnership between Rider and Waver. Now this was also pretty interesting to watch, as the two really do complement each other. I do get the feeling that this is more of Iskander’s fight than it is Waver’s, because Waver really doesn’t have a big reason for this fight. Also Rider’s constant “the Holy Grail won’t be the most important event in your life” only elludes to the fact that this is going to be more of a learning experience than anything for Waver. 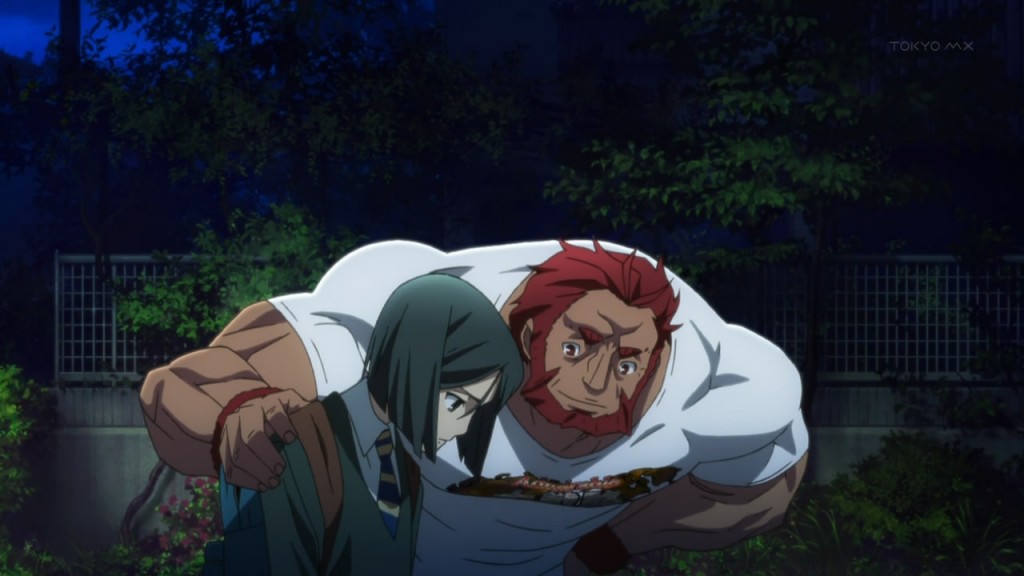 That said, it was interesting to see how alike they are, except I think Rider/Iskander sees a bit of himself in Waver.

We also had Rin do a little bit of awesome detective and magic work. This episode actually showed us that Rin has kind of always been a sort of busy body, and extremely talented at magic. I mean, she was able to save her friend and take out Ryounusuke’s bracelt. Good show girl! 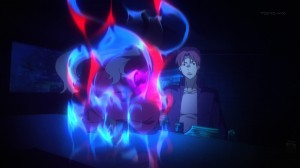 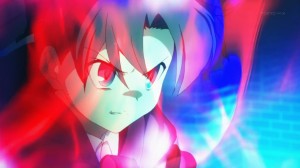 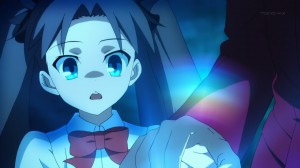 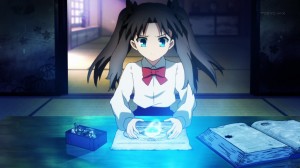 And finally, on the part on which the series ended. I’ve got to say, pairing Ryounusuke and Bluebeard together was probably the right thing to do for the Grail. Honestly speaking, Ryuunosuke twisted logic kind of made sense, in a mad, twisted kind of way. He pretty much was able to spurr Bluebeard further towards performing the ultimate spell that requires Lancer, Saber and Rider to join forces against him.

I really do have mixed feelings about where the series ended. As far as I’m aware, the series was originally going to be a straight 24 episodes run, but now has been split into two parts. I’m slightly thankful, as it gives me a chance to catch up to the series, but at the same time. I can’t help but feel that nothing really happened. 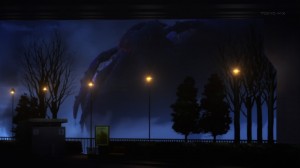 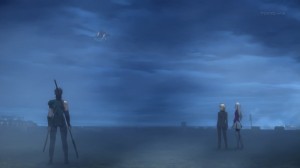 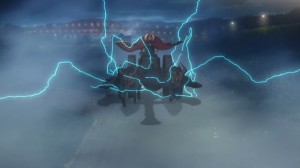 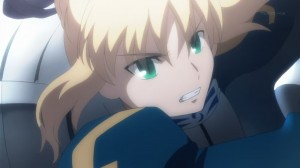 All the masters are still present, as are all the servants sans Assassin. It seems the real meat of the series begins in the second half. What the first half lacked in terms of resolutions and definitive plot progression its more than made up for in terms of character development and interaction.

I’m eagerly awaiting the second part, which we’ll be seeing in April. Until then, then! XD 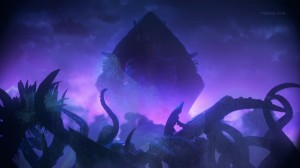 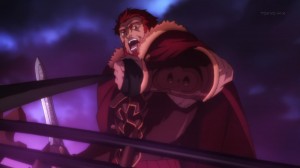 Well we have to wait a full 3 months before we get the conclusion to this big battle. See you in three months I suppose! XD