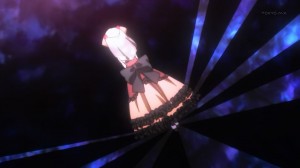 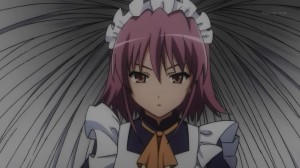 Well this episode wasn’t lacking at all in action. The battle against Sabrac was as difficult as expected and maybe even more so because he’s not the type of enemy to simply go into a rematch without learning. Of course Shana went ahead to set up her own rematch against Yuji and it certainly looks like her chances will be better this time. Even though the Trinity are nearby those ancient Flame Haze will have to just keep them busy for a while. Hopefully Shana’s power-up will be enough to tip the balance a bit more in her favour. After all we’ve seen that Yuji has incredible power as it is, tactical thinking, and of course the power of Blutsauger.

Starting with Sabrac it was interesting to get into his personal history a bit. He’s really been tied mostly with Carmel in terms of how often they have had to face off. In the episode they added some more depth to him with showing a connection to Mare, a Tomogara we met very early in season 2. It appears she started off as an anime original character, but got tied into the novels later on. So, not like we are having Sabrac be connected to this random character for no reason at all. Though it would be nice to have some more flashbacks to understand just how these two met and got along. 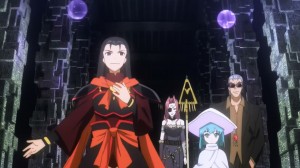 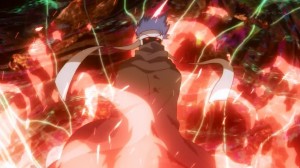 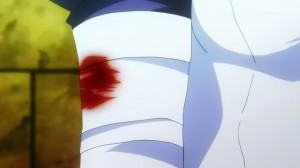 At least they handed a fair handicap over to old man Khamsin. Having that crazy rock body breaking everything up would make the battle a little too over the top. Of course Sabrac is nearly invincible unless they want to destroy the road and leave themselves no way out. Unfortunately for them all the counter that Carmel had for the previous match-up doesn’t work as well. While it’s not the worst case for Carmel additional wounds would just make fighting evne more difficult. Sabrac is the kind of enemy that you can’t afford to take on in some battle of attrition. He will win those kinds of contests every time. Their only hope is that the battle between Shana and Yuji is short or they find some other way to defeat Sabrac.

Really it is nice to just see a 3 vs 1 against Sabrac and how everyone goes at him. Khamsin has to be careful about getting close so swinging massive rocks around isn’t a bad plan. Rebecca really is just a bombing maniac, she’ll hit Sabrac with as many explosions as it takes to settle this. Carmel has the oldest history and she’s doing her best to fight and try to find a counter to his lastest adjustment on stigma. It’s pretty tough since they can’t even use the same strategy since Sabrac will have the road utterly destroyed trapping them all there. If they try to kill him that way they would all be lost there.

Of course the Sabrac situation is only a small part of what is going on. Unfortunately Shana took a bit too long and the Snake’s body has been freed from it’s containment. Of course it’s kind of a Sabrac situation right now with the mind and body not being in the same exact place. If Shana can’t stop this then Yuji really might do something that can’t be undone. 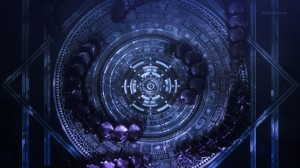 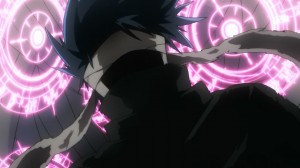 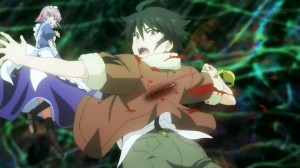 It was funny to have Yuji talk to Alistor about meeting at the castle and Alastor knowing that Shana would be coming this way. What came next was the important set-up for this coming battle. We needed to get into Shana’s head before they could fight and understand what her hopes are for this.

It really shook up Yuji to see Shana putting her thoughts and feelings out in the open. Not surprising since she has grown so much during this season in terms of understanding herself. She simply has decided to follow her heart and feelings on this. She simply is Shana who is a Flame Haze and being that person will guide her. It’s not about being two things and reconciling that, but being one person who has different aspects. Her plan to beat Yuji, force him to listen to her, and convince everyone not to kill him afterwards is certainly childish, but it’s also Shana. This is the path she has to walk in order to reach that same future that Yuji wants in terms of them walking together.

Luckily as well that the Serpant can’t join with his body and destroy Yuji since Shana would unleash her greatest power in that instant. He has no choice but to face her in that body and try to stop her. It also helps protect Yuji since that is the key in Shana’s hopes for the future. Now the only thing to do is throw their full strength against each other and find out who’s ideal and dream of the future will win out. 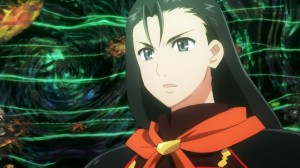 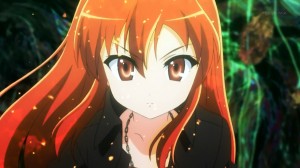 Things have gotten pretty crazy, but I can’t wait to see what happens in the next episode.
Score: A+