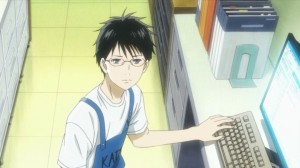 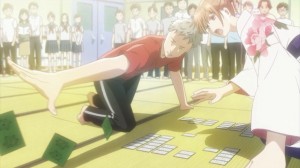 Episode 11 was the finale of the regional competition to see who would represent Tokyo at nationals, but it’s also the start of so much more.  We see Chihaya’s group trying to figure out who should be playing whom during their final match and they finally agree that Chihaya and Nishima should be on the outer-edges of the line-up while Taich is in the middle and flanked by Kanade and Komano.  Sadly, the other team has Retro who uses this “Retrot” cards (a deviation of Tarot cards I guess) and somehow he manages to divine the entire lineup of Chihaya’s group.  Just as the game is about to start, Dr. Harada shows up to cheer for Chihaya, Taichi and the rest of their team.  He finds out that there has been the same card reader throughout the day and is happy about this because it means Chihaya has already picked up on the quirks of the reader when it comes to certain cards.  Though he’s confident, it doesn’t seem to alter the opposing team’s confidence either.  As the teams start heading into the room and get situated in their line-up, Chihaya’s team is surprised to see the other team bow and thank them for the game before it even started.  Chihaya awkwardly thanks them back, but her head bumps into her opponent’s and he taunts her, which seems to put her out of sorts before the game even begins.

The game starts off rocky; the opposing team continues to get all of the cards, which really throws off Chihaya’s game and makes her desperate.  Because of her desperation, she ends up choosing several wrong cards, resulting in a default on her end.  The game continues like this for several turns until Taichi seems to break the cycle by shouting encouragement at his teammates.  After that, everyone seems to start getting into the swing of things.  Everyone except for Chihaya, who is still unnerved by her opponent.  Meanwhile, we get a small glimpse at Arata, who is at work in the local bookstore.  Because the store is completely void of any patrons, he uses the store’s computer to check his email and is surprised to see over 40 new emails from Chihaya alone.  They all have to do with the karuta tournament she’s in, though one is thanking him for the birthday wish.  Arata checks the newest one, which informs him that she’s heading into the final round of the tournament and when he looks at the clock, he realizes that the match has already started.  Back to the match at hand, the tide keeps going back and forth between the two teams.  One round Chihaya’s teammates will be able to take a card, the next the other team takes them.  Chihaya finally seems to be able to get into the zone and is able to make up an eight-card lead and tie the match while Nishima is overwhelmed by his opponent.  He remembers training the boy when he was a kid and seems almost jealous of him until he realized that karuta is meant to be fun and not always a competition.  It’s with this mindset that he’s able to win his match.  Kanade and Komano aren’t so lucky and with the end of their matches, it leaves everything up to Chihaya and Taichi.  Taichi focuses more on his memorization skills since he doesn’t have the speed or innate talent for karuta that Chihaya and Nishima have.  He’s able to win his match and the rest of the team cheer Chihaya on. Eventually, despite not having the drive to go on anymore, Chihaya is able to win her match and send her team to nationals. 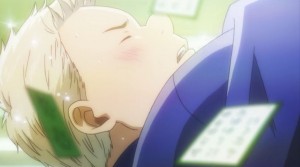 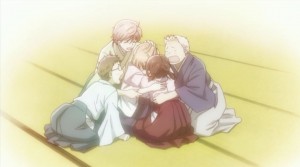 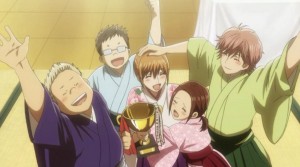 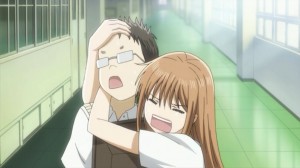 Episode 12 picks up where we left off at with the previous episode.  Chihaya’s team has just won the regional tournament and won the honor of representing Tokyo in the national tournament.  As Chihaya accepts the trophy and the team has their pictures taken, it takes Retro tackling Chihaya and taking the trophy while mourning the fact that his team can’t go to nationals for the message to really sink in.  They’re representing all of Tokyo at the national tournament.  When the group returns to school the following day, Chihaya and Komano go to show their adviser the trophy and ask her to come with them to nationals so that they can show her what karuta is really about.  The teacher congratulates them, but tells them that she can’t go since she already agreed to go with the tennis team to their national competition, which is the same weekend.  Chihaya is upset about this, especially since their adviser says that she got someone else to accompany them, but he only wants to go with because the Running Bird race is the same day in the same area.  As they leave, their adviser tells Komano that he hasn’t been doing quite as well on his tests lately and that he should be sure to concentrate on his studies.  This causes Chihaya to panic because she doesn’t want Komano to quit the team when they’ve come so far already.  Komano tells her not to worry because he’s only 5th in their class and he’s not entirely too worried about his grades at the moment.  Chihaya reveals that she’s 5th from the bottom of their class and Komano scolds her for not trying hard enough on her studies.  Later, at club practice, Taichi and Chihaya suggest that they go to their old recreational facility to practice, but Nishima tells them that he got his old teacher to agree to help Kanade and Komano with their game and the trio runs off, leaving Chihaya and Taichi alone.  They go to their old recreational facility and are immediately paired up with two people; Taichi against a college student that’s been playing karuta for most of his life and Chihaya is facing Dr. Harada himself.  After the match, Taichi is pumped about the upcoming nationals though Chihaya seems to be a giant bundle of nerves.  Taichi tries to calm her down and shows her a packet of information Retro had given him the night before.

This seems to calm Chihaya down a little and the two head home.  Chihaya walks in the door and is about to tell her parents the good news about them being in the national championship, but her sister Chitose shows up and her parents immediately forget about Chihaya’s existence in order to watch a game show her sister was on.  After the program, they all try to cheer Chitose up by saying that even though she didn’t get much camera time, she was the best looking one on the show.  Chitose apologizes and says that she wants nothing more than to become successful so that she can pay off the mortgage on the house, but her parents tell her not to worry.  Her father tells her that his job in life is to pay off the mortgage and make scrapbooks of all of the things his children have done.  We then find out that he’s on his 7th scrapbook about Chitose, but hasn’t even started one for Chihaya.  This isn’t lost on Chihaya and she silently leaves the room, completely unnoticed by her parents.  As the days go on, the club continues to practice for nationals and Kanade even comes up with her own way to pce her cards, much to the shock and awe of the others.  A few days before the tournament, Chihaya comes home to find her family gone because they had to take her sister to the airport and she picks up the newspaper only to find the small article featuring her club winning regionals cut out.  Excited, she runs over to the bookcase and finds that her father has secretly started working on a scrapbook for her.  This moves her to tears and makes her even more determined to win at Nationals.  The following day, the group is practicing as per usual when their adviser hears them shouting and goes to scold them, saying that it’s time to go home.  What she sees is nothing like what she expected; the group playing as competitively as they possibly can before Kanade begins reciting a poem that’s not part of the 100 Poems.  Her love of poetry and how it relates back to the game seems to stir something in their adviser because she suddenly decides to accompany them to Nationals.  She even borrows a book about the 100 Poems from a fellow teacher to learn more about the game in the mean time.  When they arrive at their destination, Chihaya sees the shrine they’ll be competing in and is blown away by how beautiful and how red the whole structure is. 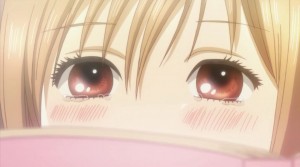 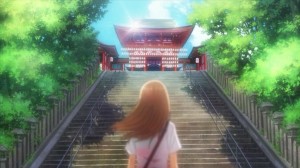 Opinions:  Okay, so…even though this covers two episodes, not a whole lot happened.  I’m so glad to see that Chihaya’s team won the regional tournament, though I don’t think they really understood the weight that the title carries with it until Retrot took the trophy from them.  However, the fact that Retrot was nice enough to give Taichi information on the tournament and the other schools that typically compete there was an unforeseen act of kindness on his part.  The whole part with Chihaya’s sister really irritated me though.  I know what it feels like to feel isolated and ignored by your parents because you aren’t doing what they expect of you (although I’m the eldest in my family) so I really sympathize for Chihaya.  Seeing that her father has 7 freaking scrapbook volumes of her older sister had to be hard to deal with, but I loved the surprise of seeing that her father had been paying attention to what she’s been doing all along.  It was really touching to see that.  I also loved seeing Chihaya’s adviser change her mind about joining them at the tournament after watching them play and see how much they all enjoy it.  I have a feeling that until then, she never thought of it as a real sport and thought it was just a silly card game.  Glad to see she finally changed her mind.  I’m excited to see what will happen during the national tournament and if Arata will show up at all, either as a competitor or a spectator to cheer Chihaya on.  I really hope he does anyway.