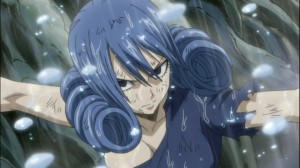 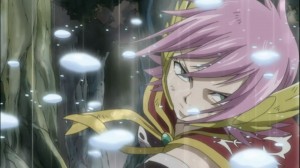 If there’s one thing that this latest arc of the series is proving, its that it really puts its heroes through some truly creative and complex problems. Nearly each character has had some serious development in their overall character arc, and have really grown from truly harsh trials. This week, Juvia seems to finally get her chance to shine, and is given the worst possible situation to contend with. All the while, the plot continues to simmer nicely as even more things are added to it.

The episode started off right where we left off last week, with a hilarious attempt by Lucy and Happy to pull out Natsu, only to realize that he can just break the rocks himself: 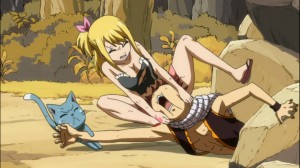 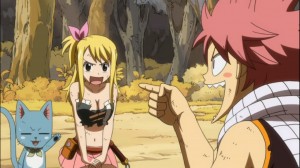 Natsu, Lucy and Happy, having kind of defeated their opponents are pretty much figuring out what to do next. Of course, this is where the series throws its latest curve ball at the viewers. If you thought that Natsu, Lucy, Loke and Gajeel wining their respective fights was making things better for Fairy Tail, you were sorely mistaken XD

First, there’s the overlooming threat of Etherion being fired again by the Magic Council. Gotta give Mest/Dragonbalt credit, he might be a spy that infiltrated Fairy Tail, but he’s no cold hearted bastard. I applaud the guy for coming back to the Island and preparing to evacuate everyone from Fairy Tail off the Island. At the same time, I never, for a moment, thought that any of them were gonna take him up on the offer. Natsu in particular, was ready to take on the Magic Council itself, if need be. 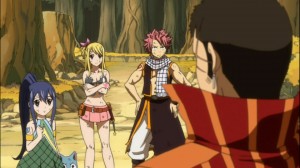 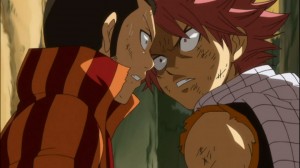 And I mean, even if Fairy Tail turned tail (heh XD) and ran, Grimoire Heart would get their hands on Zeref, and probably the whole world would end. Added to that, I doubt even the likes of Etherion could take out Grimoire Heart, when they have monsters like Purehito and Bluenote on their side. 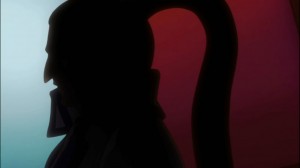 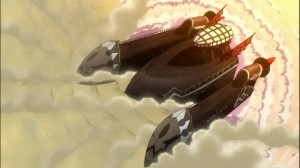 Who is Bluenote you say? Well that is the latest, most powerful antagonist that Fairy Tail introduces this episode. And not really introduces, it more of hypes up for his eventual debut. And damn, Bluenote seems to be one strong dude. Not only is the Magic Council powerless to be able to take him down, but his magic seems to cause tremors and move the very earth. Talk about intense power.

I’m willing to bet money that Gildarts is going to have come back and take on Bluenote. The very idea sends shocks of excitement throughout. I mean, think about, it’ll be like a monster. Godzilla versus Tyrannosaurus Rex? Totally. I wonder if the Island could take both Gildarts and Bluenote fighting on it. It’d probably break from all the stress XD 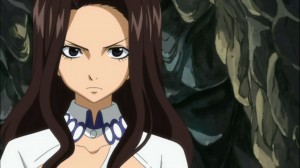 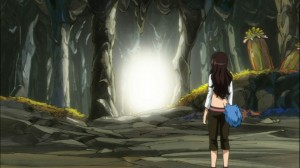 Beyond that, we had Cana continue to go down her own selfish path. It seems that Cana didn’t get any justice served to her just yet, and I honestly hope that the light she sees is something really bad that needs to be coming to her. I know, people may sympathize with the character, but I just couldn’t help but cringe when she kept saying and thinking that she’d become an S-Class Mage without any consideration for the guild or her friends. 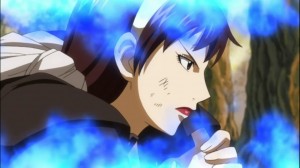 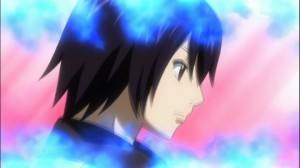 We also saw Gray finally get to see Ultear and he immediately recognized her to be very similar to Ul, his own mentor. It was interesting to note, that  he for a moment, thought she might be Ul herself. Of course, Gray’s encounter with Ultear was put on hold by this episode’s main event.

Yes, the big fight with Meldy finally took front and center this episode, and man…. was it awesome. 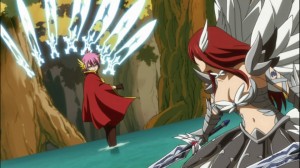 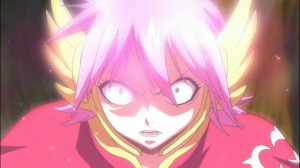 It started out with Juvia getting owned, and Erza barely being able to  keep up. Of course, things took a turn for the amazing, when Meldy mentioned the person that she wanted to kill the most. Gray Fullbuter!

At that moment… All hell broke loose. The one thing Meldy should have never mentioned infront of Juvia, and she did. Juvia totally transformed into one of those girls from an R-Rated Horror Movie: 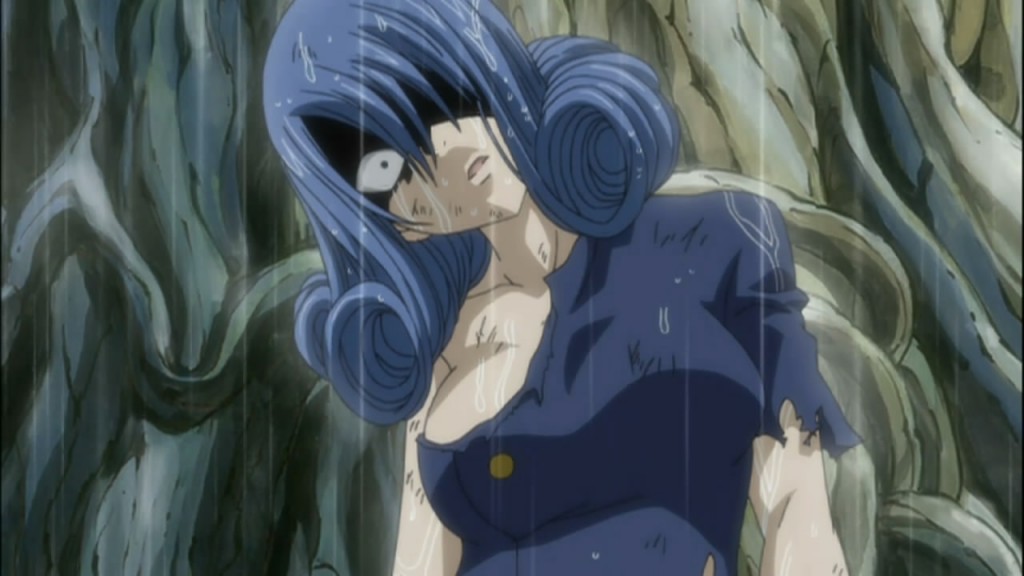 THE MONSTER HAS BEEN AWAKENNED! 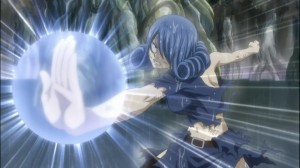 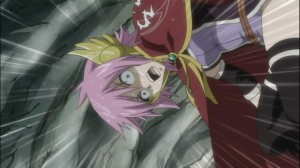 In fact, Juvia really reminded me a lot of Seras Victoria from Hellsing, just with that look on her face. And man… from then on, did Juvia totally dominate: 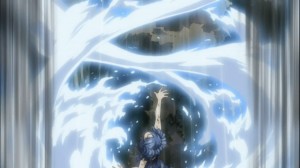 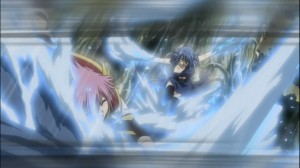 Meldy waas totally thrown off, barely being able to keep up. It seemed that Juvia would totally have it in the bag. Even Erza was content to leave Juvia alone to be able to take on Meldy by herself. And I mean, I agreed with her. At her current state, Juvia was totally on S-Class level. It kinda is Juvia’s biggest weakness that she can’t get serious unless Gray’s involved, but man, does she totally go Super Saiyan 3 (yes I made a DBZ referrence!)  when Gray is involved.

Of course, things are never what they seem, and Juvia went from having the upperhand, to truly being thrown into a situation where she can’t win. Meldy ended up using her censory magic to link Juvia to Gray: 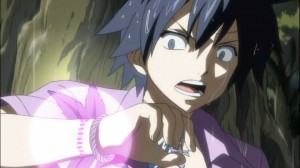 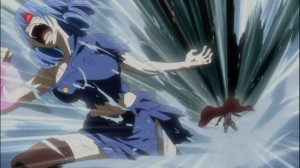 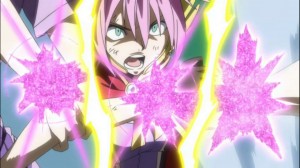 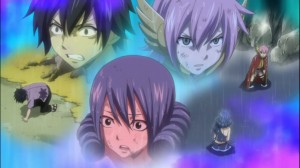 Alright, so if Juvia gets hit, Gray does too right? Not much of a problem because Juvia just need to continue to wipe the floor with Meldy. There in, comes the ultimate catch, Meldy uses her censory magic to link herself to Juvia and Gray as well. So now…. If Juvia or Meldy get hurt, Gray suffers for it. So not only can Juvia not die, but she can’t defeat Meldy either, as it would kill Gray as well. This pretty much lead to a totally despair ridden Juvia: 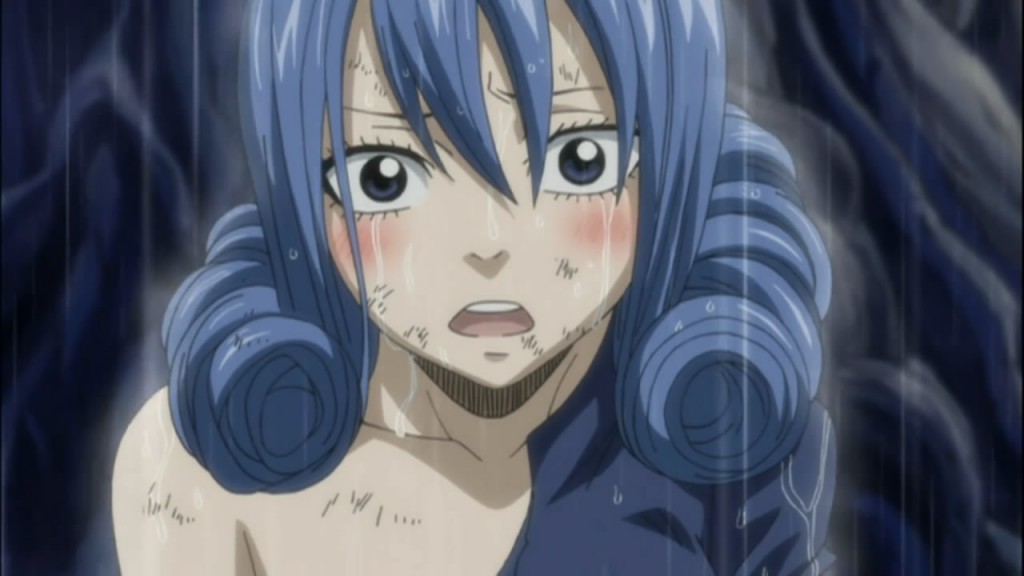 I honestly have no idea how Juvia is going to deal with this impossible situation. I’m extremely curious to see what she’s going to do. Juvia has already proven, through this battle, that she has the power required to become an S-Class mage, but now its like its a test of her mental fortitude and quick thinking. This battle with Meldy, is the true test for Juvia, and if she can defeat Meldy while saving Gray, then she’s pretty much S-Class in my eyes. I also can’t resist one final jab at Canna. THIS Cana, THIS is how you become an S-Class mage, Powering up and fighting for the people you care about!

With that said, this was a pretty solid episode. I’m really waiting for next week eagerly! 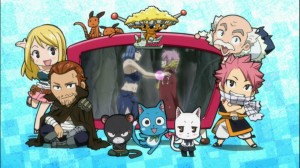 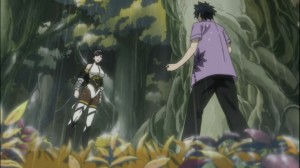 Before I go into the actual preview for next week, I’m going to do something I rarely do, and compliment the animation team for the absolutely hilarious preview. The lines with Happy spourting some truly cliche romance stuff really quickly and Natsu trying to get him to stop were true gold XD

That said,  next week we’ll have the Juvia versus Meldy battle conclude, and we will also be getting the much awaited conversation and meeting between Gray and Ultear!