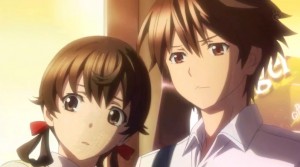 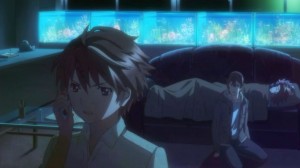 Compared to last week’s rather lack-luster episode – not including the information we were able to gather about Shu’s father – this week was a significant improvement.  Not only was there the action we’ve been missing the last couple of weeks, but we find out some plot-altering information.  The episode starts off with Yahiro’s little brother Jun being supported by Yahiro (he fell out of the bed and is unable to move on his own) when Jun becomes scared of something.  That something turns out to be Makoto and his group infiltrating the nunnery they boys were staying at.  However, when Makoto enters the room the two of them were hiding in, he’s surprised to see that they’ve disappeared.  We then see Shu and Inori working on club activities, though Shu is taking a break to take a phone call from Gai.  As it turns out, Gai is going to be heading somewhere for work and won’t be back for about 5 weeks or so.  He instructs Shu to stay in school and keep an eye on Inori.  Shu laughs, saying he’ll be a good boy, which isn’t lost on Hare, who is watching him from afar.  Later, she’s talking with Kanon and asks her friend if she noticed anything different about Shu.  Kanon teases Hare, saying that he must have crossed the threshold to manhood while they were on vacation the week before.  This startles Hare and she becomes quite upset so Kanon tries to calm her down by saying that she was just joking.  The two then become quiet for a moment before Kanon suggests they pull up their fortune for the day.  They do so and Kanon wonders what’s waiting for her at the aquarium while Hare is baffled by her fortune.  She wonders where she’ll find a tiger-striped tea kettle when, as luck would have it, the exact thing she was wondering about bounces into the room.

Kanon picks it up, startled by the whole thing when Shu appears, asking to have it back.  The two girls stare at him blankly and he explains that it’s supposed to be the token of the lover in Souta’s movie.  Kanon suddenly gets a brilliant idea and tells Hare that she needs her to run to the store to pick something up before asking Shu if he could go with her since it was getting late.  Shu agrees, but is confused when Kanon hastily tells Hare that it’s her lucky chance before dashing from the room.Hare and Shu soon find themselves on a train where Shu, completely oblivious to the ulterior motives of both Hare and Kanon, asks what it is they’re supposed to be shopping for.  Hare admits that she has no idea and as Shu turns to face her, the train screeches to a halt and Hare tumbles into Shu’s arm.  What could have been the perfect chance for Hare to confess her feelings to Shu (in fact, she starts to hesitantly do so) is quickly ruined by someone dashing onto the train and effectively running into the wall as the doors slide shut behind them.  Shu instantly recognizes the man as Yahiro and tells Hare that he’ll need her to finish her shopping on her own, since he needs to speak with Yahiro in private.  Hare looks dejected, but agrees.  Well, actually, she ignores Shu’s pleas and follows Shu as he follows Yahiro towards a hiding place.  Yahiro shows Shu his brother and explains how the people at GHQ were about to end Jun’s life because of his disease becoming untreatable.  Yahiro can’t accept this and asks Shu if he can borrow some money for traveling and food.  Shu doesn’t say that he’ll lend him money, but instead calls the Undertaker’s headquarters.  Ayase answers and informs Shu that Gai already left, but Shu tells her to meet him in one of their drop-off points because he has two people who need to go under their protection.  Before Ayase can object, he hangs up the phone and informs Yahiro that he isn’t doing it for him; he’s doing it for Jun because he’s an innocent person. 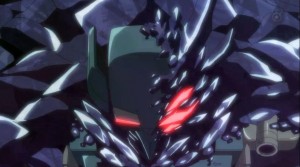 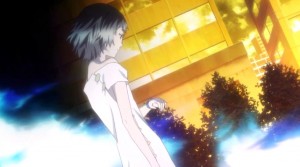 Unfortunately for Shu, Makoto and his group of soldiers have been keeping an eye on him since he was released from GHQ and are easily able to find the three teens.  Just as Shu and Yahiro get Jun into a shopping cart for transport and cover him with a blanket, Makoto orders his men to fire on them.  Shu is surprised that they’ve been found, but tells Yahiro that they can’t stop moving or they really will be dead.  The three of them keep moving until they reach a warehouse, but the shopping cart flips over, sending Jun falling onto the ground.  Before Yahiro can help him up, several Endlaves appear and close in on them.  Shu catches Yahiro’s eyes and tells him that he needs to borrow his Void, since it’s the only way he can defeat the Endlaves and keep Jun safe.  At first, Yahiro is able to fight back, but Shu tells him to shut up and let him use him.  Yahiro is then incapacitated by Shu and Shu begins to fight off the Endlaves, one of which is piloted by Daryl.  Meanwhile, we see Makoto checking in with Dan (that really spirited Colonel that seems to annoy the hell out of everyone around him) and acting just as chipper as his commanding officer.  When he signs off, Makoto returns to his normal demeanor and exits the room to watch the fight going on downstairs despite his fellow officer’s protests.  Going back to the fight with Shu, we see him able to knock off one of the Endlaves, though the one that Daryl is piloting targets him.  One interesting thing we learn is that while Shu has a Void active, it obscures his face from any Endlave’s vision.  Perhaps that’s why Gai wanted the King’s Mark in the first place?  Anywho, Shu is being chased by Daryl and is able to deflect one of his attacks.  This annoys Daryl and instead, he sends his clamp thing towards Jun, who is slowly trying to escape the fighting.  Of course, he’s captured and slammed against the ceiling.  Shu panics, because well, how the hell can he explain it to Yahiro?  But then something really strange happens.

The cable that’s holding Jun to the ceiling begins to glow purple (the same color as the crystals sprouting from his body) and the crystals on Jun’s body appear to be transferring to the Endlave itself.  Daryl ends up having to sever all connections to the unit at the risk of being infected somehow, or worse.  The Endlave that is now covered in crystals starts attacking the others, though Shu isn’t sure what’s going on when it casually steps over Jun’s limp body and heads for Yahiro’s.  Shu watches in horror for a few moments as the Endlave picks up Yahiro’s unconscious body and starts to strangle him.  In a moment, Shu is lunging at the Endlave, thrusting his Void into the Endlave’s armor.  Somehow, Shu ends up in a twilight zone where he’s able to speak to Jun normally.  It appears that Jun transferred his soul – and his disease – to the Endlave.  He shows Shu the last moments he was able to spend with his brother as a normal child and it was the same day as the Lost Christmas ten years ago.  Yahiro seemed like an indulgent older brother, allowing Jun to wear his favorite watch and even telling him that he was planning on getting him pizza for his birthday dinner.  Jun then tells Shu that his brother’s Void is the shears that are intended to end lives and that he’s afraid of his brother.  Apparently, ever since the accident, he has been able to see other’s Voids and that seeing how his brother really thinks of him is scary.  He then begs Shu to end his life, stating that he’d rather leave this world holding on to the only happy memories he has left of his brother.  When Shu hesitates, Jun begins to grow the crystals again and says that he hates his brother and wants him to feel the torture he’s had to go through over the last few years.  Shu cries out and severs the red line encircling Jun, thus ending his life.  After dragging themselves out of the rubble, Yahiro wakes up on a bench in the very park that the accident happened in ten years ago.  He asks where Jun is and Shu says that he’s dead.  Yahiro doesn’t believe him until Shu hands him the very torn and shattered watch Yahiro had given his brother ten years ago.  Yahiro starts to tell Shu off, but Shu – who looks like he’s on the verge of a mental breakdown – tells Yahiro that he was the one who killed his brother.  We then see Hare watching them in the distance. 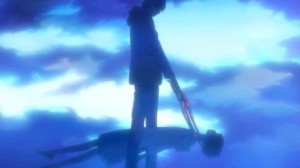 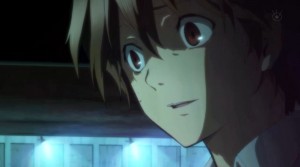 Opinions:  This was actually a really, really good episode!  Like last week, we learned a lot of intriguing things; like how Shu’s face is obscured from any Endlave user while he is using a Void.  Or perhaps it’s only Daryl?  Either way, it helps to keep his identity a secret.  The most surprising thing was the fact that Jun seemed to be able to transfer not only his disease into the Endlave, but his soul as well.  I wonder if it’s a side-effect of the disease or not, but there has to be a reason as to why GHQ wanted him dead so quickly.  Seeing the back story for Jun and Yahiro was sad, but it also made me hate Yahiro even more.  The fact that Jun was able to pick up on the fact that Yahiro didn’t want him around anymore was sad and made me really feel bad for Jun.  He never asked for anything like that to happen!  I do worry about Shu though.  It really looks like he’s on the verge of a mental breakdown because of killing Jun, even if it was for the best.  I also have to wonder how much Hare actually saw.