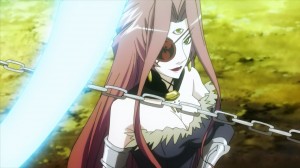 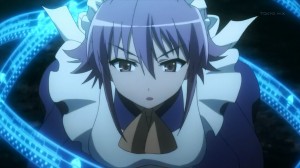 Well the battles have only continued to pick up and now the Flame Haze army has landed. Have to say they did a good job with the surprise since for all that time you could only see the one plane flying and it only had a few people on it. It really seemed like the classic kind of sneak attack with a small group hoping to do some damage. Instead this is just a full blown invasion. A battle set up in preparation for the powerful Trinity to be there waiting for them. Instead they are pretty much going to walk into a fairly empty place and slaughter all in their path. Of course the Tomogara should be racing there at top speed, but the Flame Haze have the lead since they have already arrived. The precious gate that they were supposed to protect is now undefended and Shana actually knows what it is. If she wasn’t around maybe they could buy some time while the Flame Haze tried to discover its identity.

A good fight for Rebecca. She had to go through quite the rough affair with that lion. Of course for someone left behind to help with defence it shouldn’t be surprising that he was a tough opponent. Though everything was sound with him whether it was a pure roar or his instrument. It was getting pretty close for her by the end, but luckily the attack finally got started when she needed it to. Can’t blame the guy for being distracted by an army of Flame Haze raining down on his head. Still that mistake cost him since Rebecca didn’t need anything more than that to settle the fight. 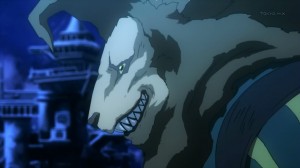 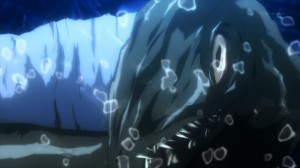 Must have been nice for Khamsin just being able to wander around and smash things up the entire time. He didn’t have much to worry about there.

Kind of feel bad for Carmel. You can see how much she was affected by Shana’s growth here. Wanting to be the one who came in there and helped to rescue her. Instead all she could do was wait for her to walk out in a blaze of glory. Still if it wasn’t for Carmel’s feelings and efforts nothing would have happened. She created the chance for Shana to get out of there and fight. Know the situation is dire, but think Shana could have had a bit more emotion for Carmel’s sake. Regardless, she did a good job with helping the invasion along and was there to greet Shana.

That was some crazy fighting for Shana though. Slowly building up to a crazy finale. Wouldn’t be surprised if she was a bit rusty after being in captivity. Plus Alastor is off with Yuji so mentally she’s fighting on her own there. Still that allowed her to go to the basics and think. This finally allowed her to become her true fighting self out there. That camel was good for giving Shana that opportunity and letting her become even stronger than she was before this all happened. Being in captivity was a bonus in some ways since she got some emotional growth forced upon her by the very situation.

Do have sympathies for those ancient Flame Haze getting slaughtered there. Though maybe for the best that now they can die and move on. Being trapped all that time is more sacrifice than anyone should have to take upon themselves. 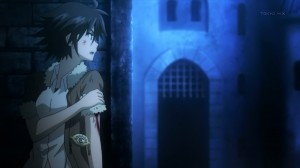 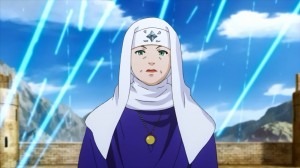 Now things are only going to get more serious. The Tomogara are coming and Shana knows what the real threat is right now. Curious to see if they hurry after Yuji, try to destroy the gate, or what. The action should only continue and we still haven’t had a chance to see Satou meet with Margery.
Score: A+