Uta no Prince-sama is based on a 2010 dating game released in Japan by Broccoli. It targets a female audience, and the anime is no exception. Being a reverse harem anime, it follows the format of its genre fairly well. Utapri can be applauded in one aspect. Unlike many reverse harem anime and though it shows the boys having feelings for the main character, none of them actually spew out that they wish to be romantically involved with her.

The show follows Haruka Nanami who has a dream of being a famous composer after falling for singing idol Hayato. She attends Saotome Academy, ran by a headmaster who’s so eccentric that it would put Albus Dumbledore to shame. There she meets six lovely men all with talent for singing and music. At the end of the year to graduate, one composer must be paired with an idol to pass and win their debut. But Haruka must face her biggest trial when all six men choose her to be their partner.

The show is pretty predictable as your watch. But if you know that going in, it makes it enjoyable. You’re waiting for those expected moments to happen and can celebrate when they do. Utapri is cheesy too. Though like the predictability, it adds to the show’s charm. 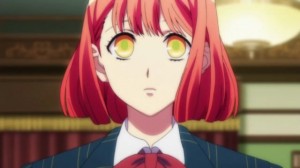 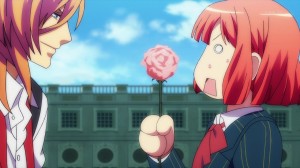 The cast of characters is definitely a high point. Though, Nanami is much to be desired as the main character. She’s the stereotypical “Oh no! Look how clumsy I am, but I have a huge heart!” This is nothing new in this genre. It would be nice to see a new mold in reverse harem anime where the main chick is actually mean and catty. She meets the men and gets put down. It’s the kindness of the men that help her change into that better person. Nanami does have some redeeming qualities that make her tolerable. For example, she starts the school lacking the ability to read music. But through hard work and effort, she teaches herself to not let her friends down. Her talent is something she works for which is admirable.

The men are honestly the greatest part of the show. The six of them counterbalance each other well. One or two of them aren’t quite as interesting, but they would miss them if they weren’t in the show. First there’s Ittoki, who’s the optimistic one of the group. He pairs well with Nanami and usually can help her convince the group to partake in activities. Ichinose is the boy who has the biggest drive in the plot. The last several episodes revolve around him and for good reason. He has secrets being kept from the rest of the cast. Hijirikawa and Ren are the next two. They grew up together and are roommates, but act as if they don’t like each other. Hijirikawa is serious and conservative while Ren is quite the flirt. Finally, there are Syo and Natsuki who are childhood friends. Syo’s character is interesting because he’s the shortest. One would think that he would be cute and adorable. But he’s tough and won’t take crap from anyone including Natsuki. Natsuki takes the role of being the one in the group who loves adorable things. But he has a dark side which was both humorous and surprising.

The school is complete with teachers who are also idols as well as Tomo-chan, Nanami’s roommate and best friend. There’s not enough time focused on this aspect. Tomo-chan comes across as a thrown in character. We know nothing about her past other than she wants to be an idol with everyone else.  The teachers are eccentric and usually have guidance for our heroes. Though, there’s no back story for them either. The main story focuses on the harem leaving much to be desired for side characters. 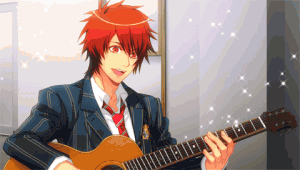 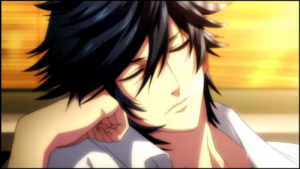 Music is such a big part of this show. Every episode has a character song in it. It’s well written. The metaphors in the song usually push the underlying feelings of the character singing. These feeling might not have a chance to be directly stated, so adding that extra layer adds to the character development. But since it’s such a big part of these characters and their lives, one must be curious to read the manga. I want to know how the music transfers over, and how it transfers to written form.

But if you are a fan of character songs, you won’t be disappointed in this show.

The dance animation is great even if the boys frolic like they’re trying to fling off invisible jellyfish.  The fluidity of their movements is well drawn as well as their facial expressions in the moment. It is subtle aspects and details that can really make an anime. For example, the frays on their clothes actually move. Other shows sometimes make the option to overlook this detail. The end of the last episode when Starish (the boys’ band) performs their debut song has surprises too. Instead of replaying the ending animation again, they added new parts to look for through the end credits. It’s rewarding that they didn’t repeat material.

One big critique lies in Nanami’s animation. She is the only character that doesn’t have light drawn in her eyes. It’s off putting especially since she’s the light to these men. 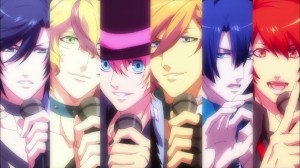 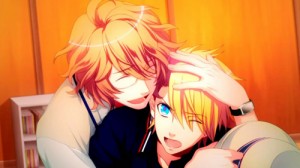 There are several drawbacks in this show however. As stated, the show is predictable. The first episode opens with Starish performing their concert. That song also becomes the ending scene. You know from the moment you see it that this will be how the show ends.

There are parts that just aren’t explained well either. For example, Nanami makes friends with a cat she names Kuppuru. When you see how it acts, the viewer automatically realizes that there’s something more going on. In episode eight, they go to an island for a music camp. While they’re there, Kuppuru shows up in Nanami’s room out of the blue. Up to this point, the anime has come across as somewhat realistic. But what occurs next is a completely different direction. Kuppuru is actually a prince from long ago named Cecile. He has been waiting for Nanami and takes her on a magical journey through song telling her she’s to be the best composer ever! This was about the time when the sheer absurdity of the situation ruins the episode. This moment wasn’t explained very well and leaves the viewer in confusion. And afterward, there’s not much mentioned of the event. Cecile makes a cameo in the last five minutes, but nothing more. There was something huge missed here. It can be assumed Cecile was to become more of a guide like Fool from Kaleido Star. Like Tomo-chan, his story was tossed to the side.

The format of this school is confusing as well and hinders some of the plot points. They’re told that upon entering they have a year to pair up for the graduation exam. If they fail, do they end up there longer? It’s a plot hole for Hijirikawa’s character. He made an agreement with his father to only attend the school for a year. If that’s true, then he’s fine since they only have that much time to graduate. This year format would also explain why characters of different ages are stuck in the same classes together. But it’s not clear.

The setting also has many missed metaphors drawn in. There was a hedge maze on the campus which could have been used as a theme. For example, a character could be lost in there. They would fight to get out but would be useless alone. It would take the other characters to help get them escape. Putting a maze in a school is writing gold that the animators gave out. It wasn’t used. Also, the space of this place is odd. The headmaster has the ability to project images in the sky. It’s questionable if this is set slightly in the future. 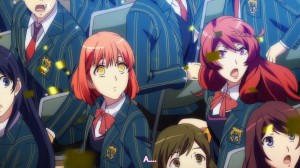 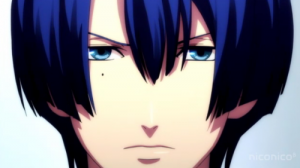 The thirteen episode format leaves plot holes. If Utapri was a few episodes longer, there’s the possibility that problems could be fixed. Things could have more time to be fully explained like Kuppuru/Cecile. But there’s so much time focused on Ichinose towards the end of the season that the other men are left out. In each episode, there are segments set up like music videos where the characters are singing. It’s the only bit of insight we have on everyone’s past. For example for Natsuki, during his song there are flashes of images of him sitting on the floor in a barren room. Sheets of music are scattered around him as well a broken mirror. Why? This is never explained, but it has to be something more important. He wouldn’t sing about it if it wasn’t. This is true with all of the characters. It leaves the viewer with questions about them. If the show was longer than thirteen episodes, then we could get more insight on the men. At the moment, you have to take it at face value and accept it.

The open ending leaves room for a season two. While Starish is performing their concert, four mysterious new male characters watch them along with Cecile. Who are these men, and why are they there? Are they going to be a rival season two band? For now, there is no answer.

Overall, Utapri is definitely not for everyone. It’s not the greatest or most ground breaking anime, but it’s enjoyable. Ladies would appreciate it if they want to have a fun girl’s night together. You can stare at the pretty men and roll your eyes at Nanami. The characters are fun while the music will get your toes tapping. It wins a rating of B- for these reasons.

Hope Mullinax is a full time freelance writer. She's been watching anime for almost thirteen years, and loves it. When she's not working on her novel or blogging, she's fangirling over yaoi and the beautiful Hiroki Yasumoto. She's a 24 year old college graduate and has been catching up on the video games she missed while in school. Just getting into cosplaying, she loves attending conventions and role playing with her friends. Her goal in life is to be a novelist or work for FUNImation. When she's not writing or enjoying a new anime, she's a nanny to get the bills paid.