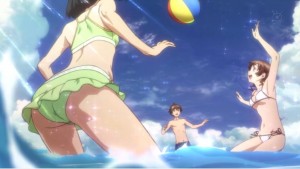 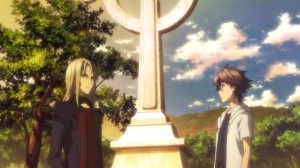 After last week’s spectacular display of Shu’s prowess as a Void user and finding out that the Undertakers have finally gotten financial support, I can only assume that things are bound to get a lot more interesting.  It seems as though I was right, but I certainly wasn’t expecting Shu to be the type to use his friends the way he does in this episode.  The episode kicks off with Shu and Inori getting ready for a club trip to Oshima along with Hare, Kanon and Souta.  His mother seems upset that he’s leaving her all alone, but she finally relents and tells Shu to at least visit his father’s grave while he’s there.  When the group arrives at Oshima, everyone is excited to spend time at the beach and to work on a project or two (or at least, they think that’s what they’re there for).  As it turns out, Shu and Inori are there for a mission along with Gai and the rest of the Undertakers.  We see a small flashback to a few days prior when Gai tells Shu that he needs his friend Souta’s Void in order to retrieve something important to their goal.  At first Shu is wary of the idea of using his friend to obtain something, but Gai tells Shu that friends are there to be used in a time of need.  After a moment’s hesitation – and some more goading by Gai – Shu finally agrees to it.  Gai suggests that they use the trip to Oshima for a club outing as a cover-up and way to get Souta there.  It seems as though the plan worked perfectly, much to Gai’s credit.  The group arrives at the beach house they’ll be staying at – supplied by the Kuhouin Group, though everyone is made to believe that it belongs to Shu’s family – and before they can even start working on a project, Souta runs out to the beach.  Everyone seems exasperated by his excitement, but they follow him anyway.

Shu doesn’t seem to like how Souta doesn’t always think of others and grudgingly follows everyone to the beach.  It’s here that he’s embarrassed to see Inori in a swimsuit, which doesn’t go unnoticed to Hare.  She tries to encourage herself and throws off her hoodie before bouncing (quite literally I might add) over to Shu, which only flusters him further.  As the teens play in the ocean, we see Arugo, Oogumo and another Undertaker member at one of the shops on the shore, watching them.  One of them voices concern about the fact that Shu seems to be playing around when he’s supposed to be figuring out a way to get Souta to the designated place, but Oogumo tells them to relax and that everything will work out in the end.  Later that day, we see Souta on a cliff overlooking the ocean and taking video or photos (I’m not entirely sure) when a woman’s hat is blown over by him thanks to the wind.  Turns out the owner is Ayase and he returns it to her, though she’s embarrassed by Tsumugi’s maid attire, but Tsumugi thinks it’s hilarious.  While Souta is up there, we also see Shu in the graveyard, paying respects to his father.  Gai shows up and asks about his father; turns out that Shu doesn’t really remember much about him other than he was a renowned professor at a university and he was heavily into research about the Apocalypse Virus.  Turns out, his father was also his mother’s teacher at one point (which kind of squicked me out, not gonna lie) but he died ten years ago during the Lost Christmas.  Gai nods in understanding before beckoning Shu to come with him.  He shows Shu a shrine, but it turns out to be the site of a GHQ underground facility that holds the stone that started it all.  Gai then tells Shu that they need Souta’s Void in order to retrieve it and suggests that Shu use Souta’s crush on Inori to his advantage. 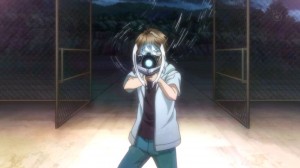 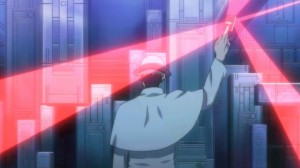 That evening, while the girls are in the bath, Souta and Shu are chatting when Souta asks Shu if he has any feelings for Inori.  Shu denies it, probably out of embarrassment, but Souta tells him that if it’s true, he’ll be making a move on Inori.  This seems to upset Shu, but he doesn’t forget the plan and tells Souta that he can help him confess to Inori that evening.  Souta takes him up on his offer and Shu gets Inori to meet with Souta later that night.  Of course, he tails them the whole time and seems irritated that Souta stopped to sit on a bench and show Inori a fanvideo he made using one of her songs.  Souta suddenly confesses to Inori and asks her to give him a chance, but Shu can’t seem to take it anymore and he calls out to Souta.  Souta is angry that Shu was following them, but is surprised when Shu charges him, shouting that Inori is his…something.  Shu never quite finishes his sentence when he retrieves Souta’s Void.  Of course, all of the Undertaker members were following them as well and all start to tease Shu about being impatient.  The group makes it’s way towards the facility, but we see someone suspicious already at the facility.  It’s an older man in what appears to be a priest’s get-up and he commands the attention of all of the guards.  Of course, he murders them all, but we don’t know why.  What’s really suspicious is that the access card he uses has the name of Shu’s father on it.  Anywho, before we rejoin Shu and his group, we see a small moment where Daryl is at a fancy restaurant, in a suit and everything, with a birthday cake with him.  The waiter approaches him and whispers something in his ear, which causes him to tear up and look devastated.  We also see his father in the GHQ headquarters and someone asks him if it’s alright to miss his appointment with Daryl, but he dismisses it and says that he’s not even sure the boy is his real son.

Getting back to Shu and the Undertakers, they make it to the facility and remain unknown to the guards and Shu hands Souta’s unconscious body to Oogumo, who tells Shu that he needs to make sure to confess with all of his heart.  This embarrasses Shu and confuses Inori, but they two ignore it and follow Gai towards the entrance.  It appears that Souta’s Void can open anything once you press the shutter button the camera.  Shu is surprised by this, but Gai doesn’t give him time to ponder over it.  As they enter, the alarm sounds, though it looks like it was set off by the man in the priest’s outfit.  Inori fends off the guards that manage to spot them and they continue on through the facility effortlessly thanks to Souta’s Void.  Of course, priest-guy is ahead of them and raises the access card into the air when he comes to a really confusing looking room and a red light glows from it and sends out rays of light into the room.  Shu, Gai and Inori come to the same room shortly and Shu uses the Void to open the room.  It appears that there were several switches that needed to be pushed at the same time in order to open the room, which explains the red light coming from that card.  When the trio enters the adjoining room, Gai is furious to find that the stone he was looking for was already taken.  He then tells them to fall back and the Undertakers leave the area empty-handed.  At dawn, we see the priest-guy standing in front of Shu’s father’s grave and informing him that he managed to get his hands on the origin of the Apocalypse Virus at last.  Meanwhile, Souta wakes up on the bench he passed out at and finds Shu standing there.  They get into a minor argument, but overall, they end up being able to make amends on their friendship.  When the club returns to Tokyo, Inori explains to Shu that a person’s Void will change it’s shape and function depending on their relationship with a person.  Shu seems surprised by this, but doesn’t push the subject. 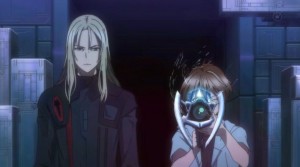 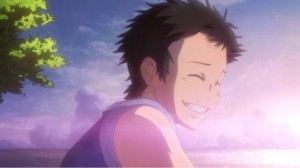 Opinions:  While not a lot happened in this episode, it was still pretty good.  The guy in the priest outfit was interesting to say the least.  I wonder what his need for the origin of the Apocalypse Virus is, but at the same time, what was Gai’s need for it?  Obviously, some major shit is about to go down and I’m curious as to what it will be.  Seeing Shu finally be able to open up to Souta about how he feels about him was good to see, since it means that Shu is maturing as a person.  Learning about his father was also interesting and it makes me wonder if his father will play a role in the show later on.  Inori’s comment about how a Void will change depending on their relationship with someone was intriguing and it makes me wonder if she’s implying that her relationship with Shu is changing, so her Void might change.  The only thing that seemed a bit out of place was the scene with Daryl.  Though it had no place in the episode, it could be alluding to something bigger than we could ever imagine.  I’ll admit, I did feel bad for the guy.  Being stood up on his birthday by his father (or potentially, not his father as the case may be) isn’t fun for anyone, whether they’re a murderous jackass or not.