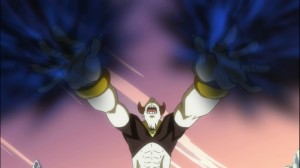 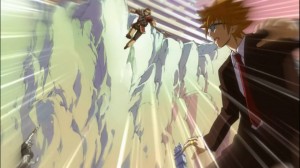 Last week, we saw one of the Fairy Tail members put one of their own in danger with their own stupidity, but this week, someone from the same guild managed to top that stupidity with just blatant selfishness. At a timee when Fairy Tail faces perhaps its most dangerous challenge yet, it seems that one of their oldest members is more content with a stupid rank exam than anything else.

While I’ll get into that in a bit, there was some other really cool stuff in this episode. The first was the resolution of the rather sudden and unexpected plot point of Capricorn and his history with Layla Heartfilea, Lucy’s mother. I have to admit, after the big build up to Capricorn being an evil spirit, this resolution was a bit of a letdown. I was really grabbed by the idea of an Celestial Spirit, enslaving humans. In fact, it had some really interesting spirits, like the Hunter guy, who even Loke was impressed with. I am glad that Loke outclassed the human without much effort. It wouldn’t make much sense for the leader of the 12 Gates to be losing to a human. 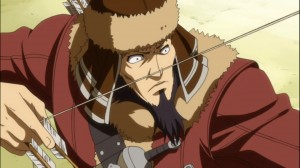 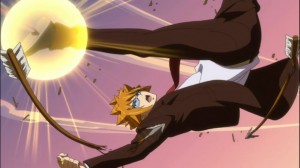 That said, the actual resolution that Capricorn was a merger between the spirit Capricorn and his human master, was quite…. eh. It felt like a cop out to be honest. When Capricorn mentioned Taboo, I immediately thought of Capricorn trying to become human to be with Layla, only to be rejected by her because she had her husband and daughter. THAT would’ve made for a real interesting idea, as then Capricorn would have a legit reason to be angry, even if the love had been one sided or something.

Instead, we found out that Layla gave away her keys to her servants, and that one of those servants ended up being blinded by dark magic, and following in Purehito’s footsteps, and joining the Dark Guild. I mean it was okay, and its nice that Lucy now has Capricorn on her side, but it seemed a bit too… convenient? It seems like Celestial Spirits can never be bad, but I’d be interested in seeing Celestial Spirits being different, and having good or evil in them. 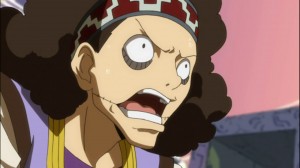 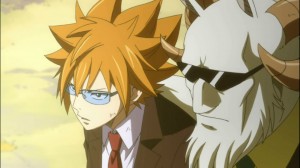 So while not the best, it was a sensible and sound resolution. I think one of the reasons this was not as amazing to me as an anime watcher, was because these two twists were in one episode. In the manga, I’m sure this was split into two chapters, and then the idea of Human merger would’ve had at least a week to brew before presenting the final resolution.

We then had Natsu finally run into Ultear. I honestly think that Natsu shouldn’t be the one taking on Ultear, but whatever. Given that Ultear is Ul’s daughter, it would make a lot more sense for Gray to take on his mentor’s daughter. I swear, Gray is sidelined waaay too much for Natsu. I mean, Natsu’s already taken down a Godslayer, he can take a bit of a break and leave Ultear to Gray. Honestly Gray just seems like a spectator, with no real opponent present for him. All he did was run away when Loke decided to take on Capricorn anyway.

I’m not sure if Natsu is going to be the one take on Ultear and defeat her in the end, but right now, it doesn’t seem like he’s having much luck: 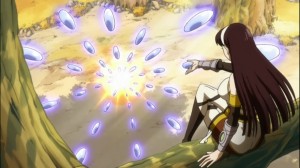 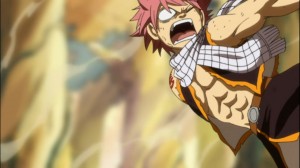 We then had Erza and Juvia take on Robo chick, who even has Robot like attacks. I mean, she calls her blades “sensory blades”. It seems like Juvia can’t use her body’s water like properties to win this fight, which should make it fairly challenging. 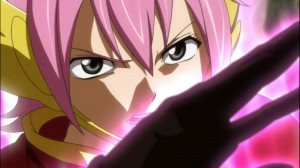 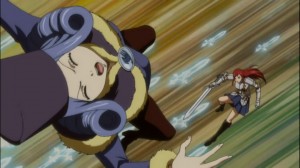 And with that, we’ll head to the final major bit in this episode. Cana, and her decision to pretty much decide to screw over her guild members, and just focus on becoming an S Class Mage. I don’t know what her reasons are for wanting to become an S-Class Mage, and at this point, I don’t care. Whatever her reason, whatever her past, when her friends and her guild are under attack, all she can think about is some darn rank? That’s just despicable and disgusting.

Lets look at what her actions have done, shall we? In the face of a grave danger, Cana has effectively split up Fairy Tail’s force and strength. Gray, Lucy and Cana needed to stick together, and instead, she tricked Gray and Lucy, and ended up splitting them up. And that wasn’t enough was it? No, she went on to get her darned answer for Lucy, and then proceeded to knock her out and leave her open to an attack. 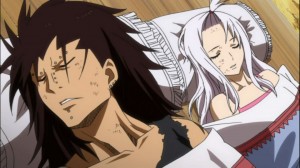 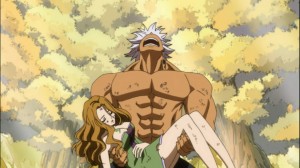 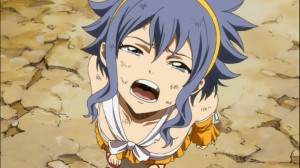 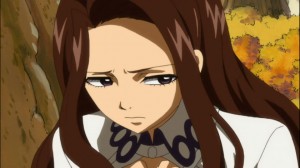 This comes at a time when everyone is starting to realize just how important it is to stay together, and take on this grave threat. It provided a nice constrast, where Levy was praying and crying for Fairy Tail to band together, while Cana went ahead, leaving one of her friends in danger, to pursue her own selfish goals. (Also it was confirmed that Mirajane didn’t die, as I expected XD)

I harped on Lisanna last episode, but I’m tempted to take it all back in light of Cana’s actions. At least Lisanna cared about her friends and wanted to help her guild. Cana is just a selfish bitch, and one that I hope never becomes an S-Class Mage. 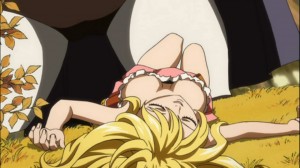 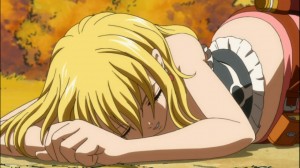 I can understand why she never became an S-Class Mage before, it has nothing to do with skill or ability, its all about your heart and what kind of person you are. With characters like Natsu, Gray, Erza, Lucy, they’ve all had their issues, but they always put their friends first, and that is the real spirit of Fairy Tail. 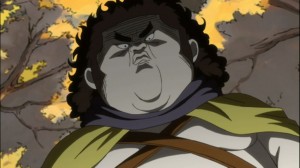 And as expected, Lucy ended up unconscious just as Fatboy float came up to her. Oh boy… is Lucy in trouble! 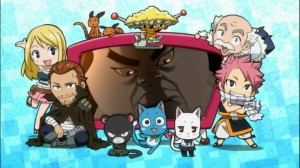 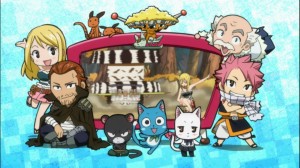 Seems like Lucy’s gonna be dealing with the fatty next episode! XD