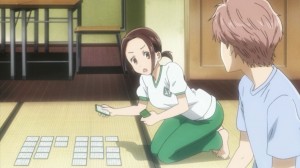 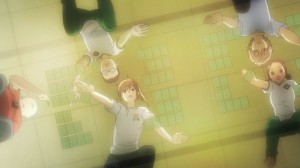 Now that we finally have all five members for Chihaya’s karuta club, it’s only natural that we’ll start to focus on their training for tournaments.  While I was expecting them to really start teaching Kanade and Komano the ropes in terms of playing karuta, I wasn’t expecting the last half of the episode at all.  Taichi, you really got one over on me!  Anywho, the episode starts off with Chihaya and the other members appealing to the teacher who hates Chihaya (or at least is incredibly stern with her) to allow them to become an official club.  She finally agrees, but tells them to make someone other than Chihaya president of the club.  While offended at first, Chihaya takes it in stride and declares herself captain for all intense and purposes.  They then head back to the club room and Kanade starts going through their budget and figuring out what they’ll need to buy in terms of supplies.  She’s disheartened to find that after purchasing the karuta decks, their 3,000 Yen budget will be pretty much spent.  Taichi then starts telling people who they’ll practice against and that they have to have Chihaya do a special kind of training since she’s Class A.  Kanade asks if being Class A is really all that special and both Taichi and Nishima explain to her that being Class A means you’ve won at least two national tournaments.  Kanade and Komano seem awed at this information and are shocked to find that both Taichi and Nishima are Class B players.  Chihaya suddenly bursts into the room and informs everyone that she wants to play against Kanade and that Nishima should play against Komano.  Taichi objects at first, saying that there’s no reason to pit beginners against her, but Chihaya tells him that as captain, she gets more say that he does.  The other four group members relent and the matches start.

As always, Chihaya plays the best she can and leaves Kanade in the dust.  Taichi pauses the match and tells her to let up a little on Kanade and the girl in question is in tears, apologizing for not being on Chihaya’s level.  Chihaya tells her not to apologize before telling her about the first time she ever played karuta.  She tells Kanade that if Arata had gone easy on her in that first match she played, she wouldn’t have come to love karuta as much as she does now.  It’s because of that reason that she doesn’t plan on going easy on Kanade and the other girl seems to accept that as a valid reason.  The game continues and although neither Kanade nor Komano win, they seem to have enjoyed themselves and want to keep playing in order to improve their skills.  As the days continue, they keep practicing and improving their skills while Taichi, Nishima and Chihaya go over different techniques for playing and setting up their cards.  One day, Komano and Kanade are setting up their cards and Kanade announces that she finally figured out a good technique for setting them up.  She plans to put her favorite cards close to her so that she can reach them easily and Taichi tells her that while it’s a good idea, it also tends to make things easier for her opponent since several of those cards are “like cards” (meaning, they start with the same syllables).  Kanade becomes shocked and apologizes, but Taichi tells her to just set up her cards however she feels comfortable doing so and that she’ll just have to beat her opponent to the cards.  Once everything is set up, Nishima starts reading the cards while Taichi plays aganst Kanade and Chihaya against Komano.  Somewhere during the course of the game, Kanade is able to grab her first card ever and is overjoyed to have gotten it.  The game continues, but Chihaya mentally tells Arata that she’s happy to be able to spread the joy that he gave her while playing karuta to others. 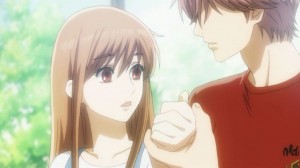 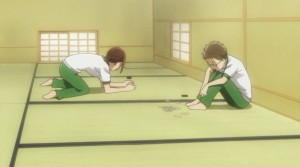 After that match, they’re about to set up another one because Kanade and Komano are so excited about playing, but their excitement is gone when their adviser (the same teacher that approved their club) storms in and shouts at them to go home since the school grounds have closed over an hour ago.  The group heads home, feeling dejected that they can only get two full games in after classes end.  Chihaya wishes that there was a sort of camp they could go to since she wants them all to compete in the tournament that will be taking place in Tokyo that summer.  Everyone seems excited about the possibility for a camp since they have a long weekend coming up, but no one can think of a place to go.  Suddenly, Chihaya gasps and stares at Taichi.  Apparently, she realized that they could use his house because not only is it gigantic (Nishima makes the comment that there really is a class difference when they arrive) but his family is out of town for a wedding and won’t be back until the night before school starts back up.  While Chihaya and Taichi are the only ones there, Chihaya is remembering how they used to play in Taichi’s room and starts bounding up the stairs because she wants to see what his room looks like now.  Taichi grabs her arm and pulls her close, telling her that she shouldn’t be so eager to rush into a boy’s room like that.  Then the doorbell rings and Taichi goes to answer it, but Chihaya seems confused (and possibly overwhelmed?) by how close she was to Taichi.  When the other three club members join them, they head upstairs to an empty room and begin practicing.  Chihaya has already mapped out 15 different matches for them to play over the course of the next two days in order to not only improve their skill, but increase their stamina.  Everything seems to be going well until after the fifth game, Taichi tells Chihaya that they should take a break.  She objects, but Taichi points to Kanade and Komano, who are collapsed on the floor and tells her that they’re exhausted and they need to take a break.  Chihaya doesn’t like it, but she relents when Taichi harshly tells her that she can’t try to break the rookies the first time they start playing seriously.

The five of them finally take a break and sit down for dinner, though Kanade and Komano are too tired to eat.  When Kanade tells Komano that they need to eat for energy, Chihaya starts when she hears something.  She grabs Kanade and the two hide; apparently Taichi’s mom and little sister decided to come home early!  Taichi is surprised to see her and his mom is equally surprised to see that he’s having friends over.  Outside, Chihaya whispers to Kanade to get her shoes and that she can stay at her house.  However, Kanade is fast asleep, so Chihaya carries her to her house and puts her to bed.  While in bed, Chihaya thinks about how much she pushed everyone today and starts to feel guilty.  Before she can actually start crying though, Kanade shoots up and tells Chihaya that they need to go.  Confused, Chihaya follows Kanade (though she doesn’t have much of a choice since she’s being dragged by the small girl) and the two end up at a small park where Taichi, Komano and Nishida are all waiting for them.  Before anyone can say anything, Chihaya apologizes for the way she’s been pushing everyone so hard, but everyone tells her not to worry so much.  They then shout “Happy Birthday!” at her and pull out this delicious looking tart with Happy Birthday written on it.  Chihaya is too surprised to do anything, so Taichi shoves the happy birthday plaque in her mouth and tells her that she’s the only one allowed to have it.  Everyone then digs in, partially because Taichi’s mom would kill them if they found out they had snuck out of the house so late at night.  Chihaya only stares at them, but when Taichi tells her that they need a pushy person in their group because that’s the only way they’ll get better, she starts to cry, but then happily digs into the tart.  Taichi eventually gets a text message, which seems to knock the wind out of him (figuratively, of course) and Chihaya bounces over to him, asking if he wants the last bit of tart crust.  When he doesn’t answer right away, she chirps and says that she was just joking because it’s all for her, but before she’s able to eat it, Taichi grabs her hand and forces her to feed him.  They then stare at each other for a moment before Taichi hands her his cellphone, telling her to read the mail.  Turns out, Arata texted Taichi to apologize for his actions and asked him to tell Chihaya that he said happy birthday. 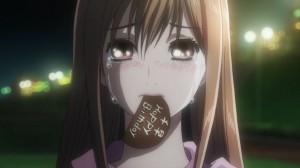 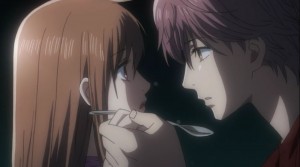 Opinions:  The training camp aside (because let’s face it, that wasn’t all that eventful) the whole Taichi/Chihaya thing was really well done!  I’m even starting to question my choice of going for Chihaya/Arata! D:  Taichi has definitely grown up and matured and it’s so obvious that he’s in love with her, but it also remains to be seen if Chihaya even notices that.  She got really excited when Arata wished her a happy birthday via text message, so I’m not entirely sure what to think now.  That aside, the episode overall was pretty good.  Seeing Kanade and Komano improve their game and even become excited about playing in a tournament was fun to watch.  It also means that Chihaya is doing her job as captain of their team.  I do wonder how they’ll do in the tournament (especially since Chihaya wants them all to go to nationals) and how this whole love triangle thing is going to turn out.  If Arata doesn’t make an appearance soon, I have a feeling that Chihaya and Taichi will end up together.