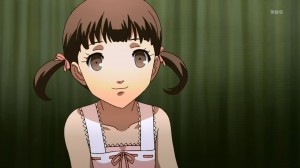 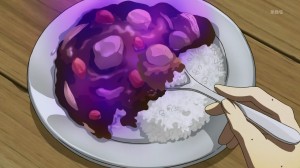 This episode was definitely a mixed bag for the characters. They had some good times and some horrible times. We got a new arcana character being introduced along with a school camping trip. Though after seeing this episode not sure if I’d ever want to go to one. Maybe if I could pick out the good parts and leave the terrible ones behind. Still it was pretty entertaining to watch the chaos.

That’s Kanji for you. Want some answers then just grab the kid and interrogate XD. Of course besides that he had a horrible episode here. Doubted by the guys, his seconds of the ordered food was given away, knocked out by Yukiko/Chie, that sleeping situation…., getting knocked down into the river, and how the episode ended…Just wow that’s a rough time for the newest member of the investigation there. I suppose there is nowhere else for him to go than up. Though this is after he’s gone down so very far. At the very least he is pushing at his interest towards girls. One could bring up the nosebleed either way, but if it was about the guys it was a bit late considering he was hanging out with them that whole time while waiting for the girls. Still as the episode showed his rep in the group is a bit ambiguous. 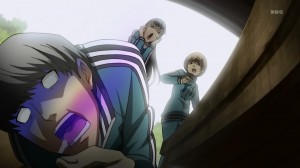 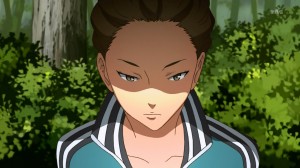 There was some nice focus on Naoki who is the younger brother of the diseased Konishi. Goes to show some of the negative effects you might not think about outside of the actual tragedy. Clear that no one knows how they want to handle the situation so you have plenty who simply stay away and watch. Then you have people like those in that health association who gossip about it even though he’s not that far away. A few of those people sounded upset that Naoki was getting that ‘special treatment’ clearly not caring about how Naoki himself was feeling. They made some nice progress with Naoki showing how the direct approach really does help things out sometimes. Of course if this is all they do with Naoki it’d be disappointing. It’s a good starting point, but that’s about it.

Behold the horror that is Mystery Food X! What’s even more shocking is that the girl who ate that toxic waste isn’t dead. Hopefully if she keels over a few days later they attribute it to the food and not make her a victim in the case XD. But yeah I feel for Yosuke and Narukami who had to even taste that stuff. Think the girls should have had to taste it to learn just how bad they are at cooking. But yeah Chie they had hinted at, but wow Yukiko was just as bad there. Guess she never spent much time helping in the kitchen. If she had the business would have gone under by now XD. Nothing wrong with not being able to cook, but cooking anyways is a pretty ugly thing. Especially encouraging someone else to try food you are scared of and someone was already down on the ground after tasting.

It wasn’t all negative though. Before the unfortunate business in the river Yosuke got some payback. They had to get pretty close to the girls while in the tent to avoid detection and they did get to stare when they got into the swimsuits that Yosuke picked up. I’ll say good job there Yosuke in picking them out. Though would agree traveling around with their swimsuits so he could present them at that moment was a bit creepy. Maybe the guys were too worried about getting killed by King Moron, but they didn’t seem to react to the close quarters as much as the girls. Too bad since you’d think Yosuke would appreciate it more. 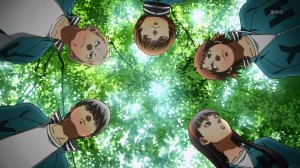 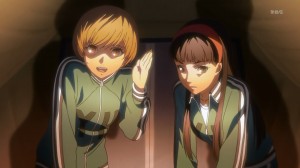 But wow Aiya really does deliver anywhere. Got to give the girl credit she is pretty capable. Maybe she’s the culprit…I mean she can go anywhere and seems almost super human in her delivering abilities. I say if she shows up in the TV delivering food it’s a lock.

One cute moment was the whole magic trick being used to cheer up Nanako. Can tell Narukami felt bad that she had to be left alone during the trip, but at least he did his best to leave some good memories before he went out. Though after considering how things went, maybe she had the better time…Slowly but surely a nice bond is being built between these two. With how busy her father is Nanako does need some kind of family to rely on during those hours she’d normally be left by herself.

They put some nice effort into figuring out a connection between the crimes. They still have the connection with Yamano, but it’s getting pretty stretched considering Kanji and Yukiko are children of people who interacted with Yamano. The TV connection is definitely stronger and gives them some chance to predict the target. At the same time it’s still a pretty tough thing to work with. How many people who live in that town might appear on the TV? With these murders reporters are going to be everywhere which is going to put a lot of people under a microscope. It’s still better than nothing though. 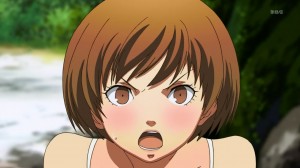 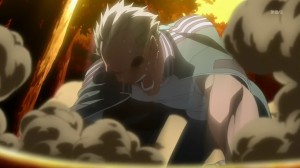 This episode had some laughs and yet had some tragedies. I guess it’s up to the guys to decide if this whole trip didn’t suck for them. But considering they were downstream of a puking King Moron…I’d lean towards it being pretty bad.
Score: A-