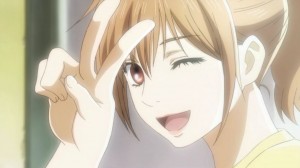 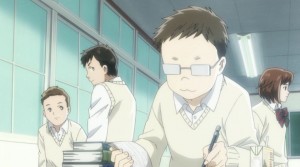 Seeing as how Chihaya needs two more members for her karuta club to be recognized as an official club, I’m not surprised that this episode centered around her trying to recruit another member.  What I wasn’t expecting was that she’d pick one of the most introverted people in the entire school.  The first thing we see is Chihaya and Taichi practicing karuta, as always.  I mean, what else would we be seeing?  As usual, Chihaya beats Taichi’s ass at the game, which frustrates Taichi.  Kanade is amazed by Chihaya’s skill but is shocked to see Chihaya suddenly collapse after the game.  Taichi reassures her that Chihaya is fine and that she’s just sleeping.  He then quietly comments on how Chihaya relies too much on her speed, so every game takes a lot out of her.  Kanade is confused, so he explains that having speed in a game of karuta is one of the best attributes a karuta player can have because it’s also linked with their instinct.  Taichi then internally wishes that he was a better player so that he could give Chihaya more of a challenge when playing.  He then thinks about Arata and how if he was there, Chihaya could potentially be even better at karuta.  He quickly disregards the thought and smiles at Chihaya, who is still sleeping, and thinks about how he’s okay with losing if it’s Chihaya he loses to.  Suddenly, Chihaya wakes up and jumps to her feet, shouting that she needs to recruit more members.  Taichi shouts after her, asking who she’s going to try and recruit now and she tells him not to worry because she’s going to be recruiting Tsutomu Komano, the second smartest person in their class after Taichi.

While Chihaya makes her way to her classroom, we see Komano sitting at his desk studying.  As he does so, the rest of the class whispers about how weird he is and how he’s such a bookworm.  Of course, none of this is lost on Komano, who internally laments the fact that while he hates school, he’s good at studying and it’s something he likes to do.  He continues to internalize his feelings about how he’s willing to bring up the average of the class’ grades because it means that people may come to like him eventually.  However, some of the students continue to whisper about him and how even though he studies constantly, he still can’t beat Taichi at any of the tests.  Of course, no one expects Chihaya to come bursting into the room and pounce on Komano.  She loudly introduces herself to him and asks him to join the karuta club.  She even holds out a jam-filled roll and admits that she planned on using it as a bribe.  Komano rejects her offer and tells her that he has better things to do than to play a stupid game.  That irritates Chihaya and tells him that it’s not a stupid game; you have to be pretty smart to be able to play competitively.  Komano scoffs at her and tells her to leave him alone, but Chihaya doesn’t appear to be done with him.  She literally grabs him and pulls him out of his seat and intends to drag him to the club room.  What she probably wasn’t expecting was for Komano to clutch at his desk and drag it with him. 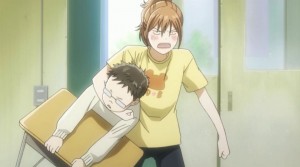 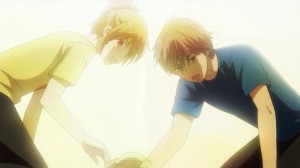 Some time later, while Taichi is teaching Kanade the basics of setting up the karuta cards, they’re interrupted by Chihaya bursting through the door with Komano and his desk.  Komano is protesting – very loudly – about the way Chihaya is man-handling him, but Chihaya ignores him and shouts at Taichi to get the karuta cards ready.  Komano quiets down upon hearing Taichi’s name and when Chihaya finally releases him, she happily skips over to the tatami and tells Komano that karuta is a really fun game and that once he watches them play a game, he’ll realize what she means.  However, Komano tells her that he doesn’t have time for stupid games and is about to leave when Chihaya tells him that it’s a great game for helping your memorize things, which would help him study better.  Komano seems intrigued, but when he lays eyes on Taichi, he becomes a bit too smug.  He then tells them that if the game is all about memorization, they should be able to play with the cards flipped over.  Taichi and Chihaya freak out for about half a second before agreeing to it, if only to get Komano to watch them play.  They set up their cards and begin memorizing where everything is, but the fifteen minute memorization time doesn’t seem to be enough for Chihaya.  Kanade then instructs them to flip over their cards and start the match.

Chihaya desperately tries to remember where  the cards are, but Taichi continuously gets the card every time.  Taichi internally realizes that their memories are fresh at the beginning of the match, but as they continue on, it’ll become harder to remember what card is what, especially after they start trading cards.  However, when he looks up and sees Chihaya’s panicked face, he realizes that she’s still not good at memorizing where the cards are and that he can actually beat her.  He then hears his mother’s voice, scolding him and telling him to stick to things that he can win at.  That seems to really give him the motivation to make the most out of this game.  As the game goes on, Taichi continues to get the cards before Chihaya and even screws with her by moving cards, which causes her to panic.  At the conclusion of the game, Taichi won and Chihaya sulks about her loss, but Taichi is a good sport and teases her a bit.  Komano silently leaves the room after seeing Taichi’s victory, realizing that he has no chance of ever beating Taichi.  Taichi follows Komano and tells him that he should stop hiding behind his desk and live a little, but Komano tells him that being behind his desk is the only place he feels safe.  Taichi eventually gets fed up with him and grabs the desk, tossing it a ways across the courtyard.  Komano freaks out and runs to his desk, looking for damage, but Taichi shouts at him, saying that even though karuta is hard, he enjoys the challenge and keeps playing.  He then apologizes for Chihaya dragging him to the club and leaves Komano alone.  However, Taichi’s words seem to resonate with Komano and he thinks back to how even in middle school, everyone only used him for his notes and that he’ll never be let into their “circle” of friends.  After a moment’s hesitation, he leaves his desk and runs after Taichi.  It looks like Chihaya was able to score another member after all.  Only one more to go! 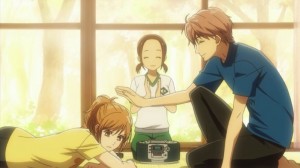 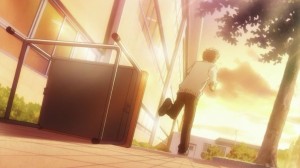 Opinions:  Though this was an interesting episode, it was also kind of boring.  Komano wasn’t the best character, but I’m hoping that once he joins the club, he’ll start to open up a little bit more and become a more likable character.  Chihaya certainly can be determined when she wants to be and I have to give her credit for that.  However, Komano’s challenge was interesting to watch and you could feel the tension as Chihaya desperately tried to keep up with Taichi.  I hope that she’ll be able to improve her memorization skills in order to compete well in the national tournament.  Hopefully she’ll be able to get one more member and will be acknowledged as an official club soon!