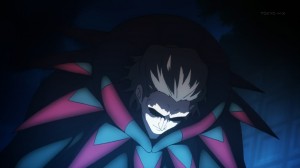 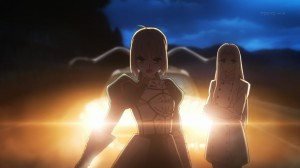 Another Double review because of circumstances beyond my control. Since we got hacked on the very day that Fate/Zero comes out, I was busy dealing with that the entire week proceeding that day until yesterday when things finally got back in order. Hopefully if the world doesn’t explode from hence forth, I can get into the swing of reviewing this series weekly, as its beyond friggin awesome.

The 6th episode actually opened with Irisviel doing some crazy Fast & Furious style driving XD. Of course, the driving came to a sudden halt when Caster appeared before the car. As Saber finally met Caster, the stage began to set for what would be the next big conflict in this war.

Anyone who guessed that BlueBeard was actually Gilles de Rais and was related to Jeanne D’Arc was spot on. BlueBeard, obviously one crazy twisted sicko of a person, confuses Saber for Jeanen D’Arc and obviously longs for her to remember being someone she’s not. I confess to not knowing much about the Jeanne D’Arc history, but I doubt Jeanne would’ve been even remotely interested in a guy this creepy and out of it XD

That said, being rejected only made Gilles’s obsession with Saber all the more stronger, and he went on to slaughter more children. The kicker of this whole thing was that Assasin was actually following Saber and Illisviel and was hencce, able to learn of the existence and activities of Caster. 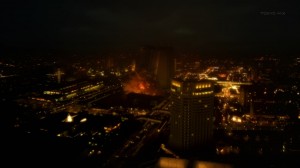 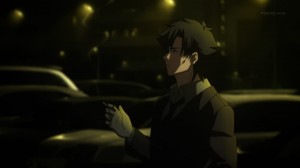 The other major event that happened, was the duo of Maiya and Kiritsurgu attempting to take out Kayneth in one of the most unorthodox ways possible. Kiritsurgu had the entire building cleared out, and then proceeded to blow it to hell. For all the traps and magical defenses Kayneth may have, if the building topples, he goes down.

What was more interesting though, was the conversation between Kayneth, Sola Ui (his wife) and Lancer. While Kayneth was scolding Lancer, his wife went to Lancer’s defence. An interesting little love triangle is pretty much forming, with Kayneth very much in love with Sola Ui, but Sola Ui having eyes for Lancer: 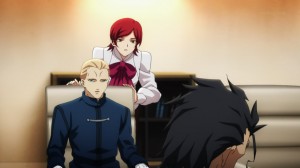 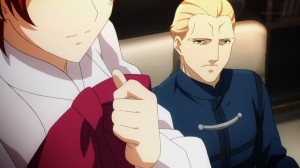 I admit, it gotta sucks to be Kayneth, as his woman is falling for his very own Heroic Spirit servant. It also seems, that nearly every master is cheating or using some manner of trick in some way or another. In the case of Kayneth, he uses his wife as a second master to provide additional Mana to Lancer, and be able to fight himself as well.

With the building in which Kayneth resided being blown up, Maiya and Kiritsurgu prepared to withdraw. Things are never that easy though, and interestingly, Maiya is attacked by none other than Kirie. Seems  like Kirie has taken an extreme liking to Kiritsurgu and intends to hunt him down and confront him. Maiya and Kiritsurgu are able to escape, but Kirie is definitely hot on their tail, and its only a matter of time before he does indeed face Kiritsurgu. 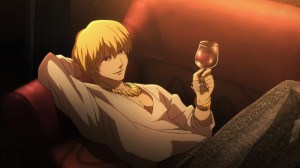 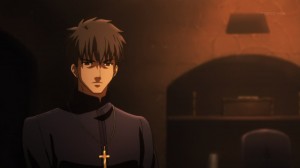 The final major scene, was the talk between Kirie and Gilgamesh. Gilgamesh is obviously none to keen with how Tsukiomi is handling the Holy Grail war, nor is he that impressed with Tsukiomi’s desire. This first talk signals the start of an alliance that will pretty much end up killing Tsukiomi and leading to the events in Fate/Stay Night. It was interesting to see Gilgamesh slowly attempt to change Kirie into what he will eventually become, while also being fairly surprised and interested by Kirie’s personality. Of course, after Gilgamesh leaves, Kirie reveals the real reason he’s interested in fighting in the Holy Grail war. Kirei seems to think that he’ll find the answer if he confronts and battles Kiritsurgu, just as Kiritsurgu was able to find his answer amidst all the battles he faught.

Of course, with Caster/Gilles showing no restraint in his evil acts of kidnapping and slaughtering children, the Church is forced to act. In cahoots with Tsukiomi, the Priest of the Church devises quite the evil plan. The very idea of an extra command spell is beyond ingenious as a trophy for however would kill off caster first. Added to that, since Tsukiomi intends to swoop in at the last moment and claim the prize, the other masters are going to be labouring for nothing really. 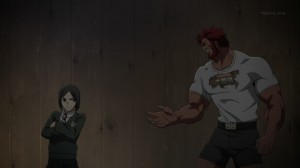 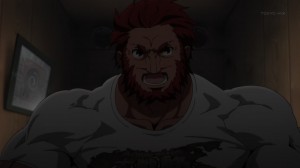 I loved the little bit in the 7th episode with Iskander and Waber. The fact that Iskander made Waber promise to get him pants if he defeated a servant, was just full on awesome and very funny. Also gotta love Iskander’s dress sense, as he loves a shirt with the world map plastered over his chest XD

We also got our first major clash between Saber and Kiritsurgu in the 7th episode. Saber is obviously not cool with just being bait, and sitting idly by as Kiritsurgu and Maiya do all the fighting. Of course, I think Kiritsurgu deals with it nicely not even giving her a response or notice. Of course, Saber ends up being sent out to take on Caster anyway, despite having one of her arms locked down by the earlier attack she suffered at the hands of Lancer. 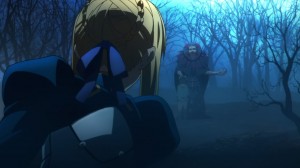 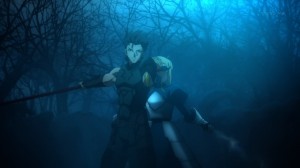 As expected, Saber is not able to put up too much of a fight without both her arms, and is rescued by Lancer. That comradeship that has been developing between the two continues to grow, as they once again side with one another against a common enemy. 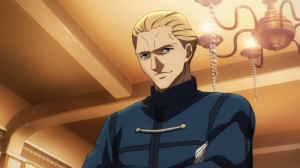 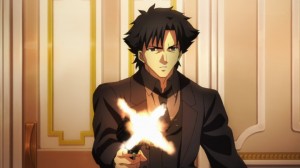 The real kicker in the 7th episode though, was the start of the battle between Kayneth and Kiritsurgu. After getting attacked by Kiritsurgu head on, this time its Kayneth that takes the frontal assault stance. 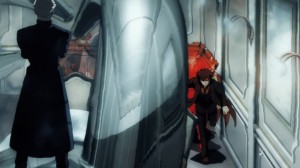 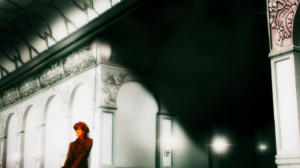 I’ve gotta say, it was beyond cool seeing Kiritsurgu actually use some of his magic based abilities. While Kayneth is probably the more talented mage out of the two of them, its definite Kiritsurgu that’s the more acomplished fighter. It is interesting that Kiritsurgu doesn’t rely heavily on magic, but rather uses it  sparingly to enchance his fighting abilities. With the episode ending on a full on face off between Kayneth and Kiritsurgu, I’m interested to see if this will  indeed be the final battle for Kayneth, and if the mge killer will claim his first victory in the Holy Grail war.