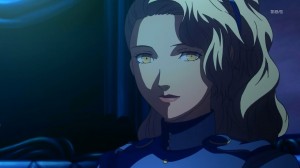 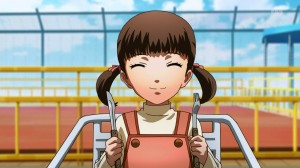 Well this episode had some good laughs and set things up for the next rescue. I liked the focus given to Nanako and her connection to Yuu. Could see how broken up the girl was that the trip was cancelled, but she got the trip to Junes anywhere. What a devious organization making young children love them with jingles XD. But really it was good to see Nanako getting cheered up and how the group just accepted her instantly. Not a surprise since she’s a cute kid who is pretty strong to brush off a conversation that brought up her deceased mother. Had to be tough before Yuu showed up with her father being busy in the police (though not as busy before the murders) and not having a mother around. At least the series brought up exactly why it was a single-parent household.

I worry about Yuu’s fashion sense. Those trunks were a bit….well I guess everyone is different. Nice of Nanako’s father to pick Yuu up a gift for Children’s Day as well. Maybe expected since he’s currently Yuu’s guardian, but still a good move. Feel for him as well since he didn’t want to just dump the trip with Nanako, but he’s a vet in the police force and if someone goes down he’s got to step up. Sadly responsible for a lot of things and sadly times like this he won’t be able to do it all. 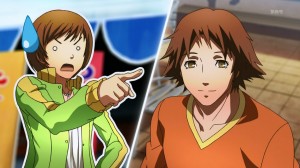 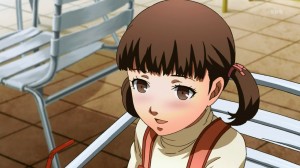 That was quite the little scene with Margaret as well at the start. Just a conversation, but it was a start to getting to know one of the people that are in the velvet room. A pretty mysterious place at the current stage.

It’s good that the group was working on figuring out the case. Sadly in the same episode as the female theory was inserted it was also busted. Though they can’t cut the connection to Yamano either. That scarf that was custom made for Yamano was in the shop so there’s at least some kind of connection. Either way they have to make rescuing Kanji their top priority. Sadly for Kanji I’m not sure how eager anyone is going to be to save him after seeing the Midnight Television. There were some hints that something was up with the blushing when talking to that person, but damn….Well to be fair we know that Yukiko wasn’t truly after scoring with a bunch of guys so we’ll have to see what the truth about Kanji is.

A nice little scene though with Yukiko and Yuu. The girl clearly is not used to guys, but that’s probably not all it was. Don’t want to jump in on anything too early, but that was some blushing she was doing. It wouldn’t be surprising if she did have some early feelings considering the whole rescuing thing. Either way this allows Yuu to pick up yet another arcana which is good since it gives him even more flexibility going into this Kanji rescue. While I doubt we will see all the new arcana’s he picked up it was still good going. Will say that Yuu was smoother at getting the phone number than Yosuke was. 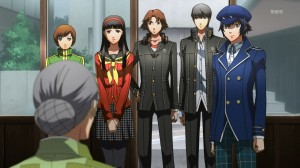 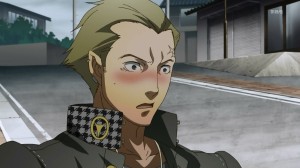 On that note I found Yosuke and Chie to be great comedy this episode. The silly spy thing they had going with the phones was great and that just lead into the chase scene too. They should build up a pretty entertaining friendship to say the least if things continue on like this.

I just found the scene with the group in class hilarious. The game music was used perfectly and just watching Yosuke and Chie doing so poorly in class was a ton of fun. I worry about those two and their tests…Narukami is putting in solid effort and actually seemed to be doing alright even though his knowledge isn’t anything special.

Wow that’s one excellent delivery service. Aiya’s delivery deserves top marks I think for putting in such an effort to deliver a meal. Makes me wish some pizza places had the same level of determination as this. While I think they took the comedy a bit too far it was worth a chuckle to have the delivery showing up while they were running for their lives from Kanij. Who’s trying to prevent who from being kidnapped again?

The situation about Kanji is interesting though. You’ve got this guy who apparently gets into quite a lot of fights and isn’t exactly popular around school. Yet what Yuu picked up at the start of the episode and handed to him was hardly scary. He chased our group all over the place on multiple occasions and certainly can be intimidating. But he also acted unusual around that person that showed up at the shop. Then of course you have that scene on the Midnight Television. Does certainly make you think he is more interested in guys. Would add a different dynamic to the group than they currently have. Of course need to prevent him from getting killed first. But besides Kanji that guy stopping by Kanji’s shop and talking to him seems unusual. Gave Yuu that look as well… 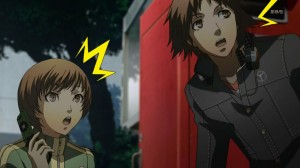 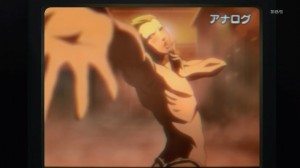 But now a tricky rescue awaits the characters. It won’t be very comfortable to rush in there, but they’ve got to save Kanji. Even if the guy was chasing them around it doesn’t mean they can leave him in there to be killed by his shadow.
Score: A