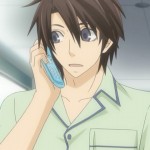 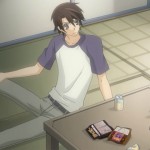 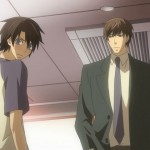 So, more Chiaki and Tori again. Joy. Chiaki wants to hang out with Yuu but he’s busy, Tori calls for a movie date but he has to cancel cause of work. Chiaki is bummed about it but tries to shake it off. He decides to go out on his own but during his outing, comes across Tori chatting with a lady. Ho ho~ and whats this~ it seems that Tori used to go out with this lady back in high school. DORAMA~ In typical over dramatic fashion of a dense idiot in love, Chiaki over reacts and yells at Tori on the phone and STUPIDLY goes over to Yuu’s place.

More stupidly, Chiaki brings up Tori’s girlfriend and the pair talk about them for a bit. Yuu implies that perhaps Tori wants to like, take care of him and Chiaki angsts that perhaps hes just not healing enough for Tori. Tori winds up calling Yuu’s place and Chiaki overhears Yuu’s conversation (that he’ll make Chiaki his). Yuu brushes it off as a joke (har har har T_T) but nope, he was kidding bout kidding. He again confesses to Chiaki, pushes him down and kisses him. He confesses that he’s been in love with Chiaki since they were in middle school….and that he’s hated Tori for just as long.

Though Chiaki keeps saying that things can’t be that way with Yuu but Yuu keeps pushing Chiaki to sleep with him just once. Chiaki punches Yuu off him and he asks if he isn’t good enough and if only Tori is good enough. Naturally the persistent doorbell was Tori and he is *this* close to using Yuu as a punching bag but Chiaki manages to drag Tori away. They talk/argue where Chiaki more or less admits to being jealous of seeing Tori with his ex-girlfriend and they make up. Whee /deadpan 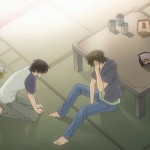 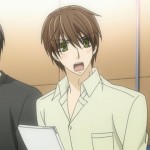 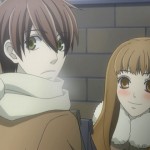 Back to Ritsu and Takano’s story! Takano attempts to teach Ritsu the more aggressive method of informing an author of how to improve their storyboards. Read: Telling them that ‘hey this part is boring. change it.’ An-chan calls Ritsu up at work to tell him that she’s back from France and wants to drop something off for him. Takano tells Ritsu to get ready for the planning meeting and lookie this, Isaka pops in~ Surprising revelation during conversation: Not only does Isaka know papa Onodera but he consulted Isaka about Ritsu’s job switching thing. Isaka tells him to forget about it but Ritsu’s not happy that he got into Marukawa not wholly on his merits. Also….Takano knew about it. Not at his 100%, Ritsu still fights through the meeting and does well.

On the way back home, Takano invites Ritsu to come over for a drink and to just rant him heart out…and also asks if Ritsu is that bothered by using his connections. And that people who worry about pointless shit irritate him. But he still tells Ritsu to buck up (in more words). On the walk back, the pair walks back to the apartment holding hands but they part when they catch sight of An-chan waiting at the entrance. But before he can explain An-chan to Takano, Takano heads up to his apartment and Ritsu walks with An-chan to the main street.

Ritsu angsts about having to explain An-chan to Takano-san, hell, even if he should….which does NOT explain why he winds up at Takano’s door in a horribly awkward attempt to explain himself. But Takano surprises Ritsu by revealing that he knows that shes his finance. Takano however is in no mood to humor Ritsu and says that he’s on his way out to see Sorata (and Yokozawa, Ritsu adds). Worried, Ritsu stops Takano and anxiously explains that him and An-chan are nothing but friends. Takano asks why Ritsu is telling him this….which is something he himself is also asking. He grabs hold of Takano again and says that yes she DID confess to him a long time ago but he told her that he was in love with someone else so….would he please not go over to Yokozawa’s place?

As Takano embraces him, Ritsu wonders what he’s doing. Takano confesses that he wants to know everything that Ritsu has done in the past 10 years bur Ritsu thinks that he’ll never tell Takano about how deeply he effects Ritsu. At work, Ritsu thinks that though the new name by Ichinose-san is better, he still doesn’t agree with Takano’s ways of telling the author to improve. Grumbling, Ritsu calls his own author and ahem….his method isn’t really going well. Almost an hour later, Ritsu winds up yelling at his author that “ITS TOO BORING PLEASE CHANGE IT”…who hangs up on him. OH LOOK AT THAT~ THAT is when Takano remembers that THAT method only works on Ichinose and Chiaki 😛 In tears, Ritsu wails for this whole thing to be a dream. 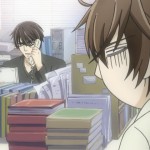 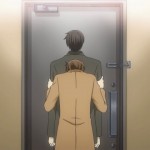 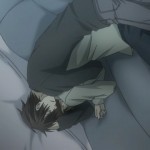 Episode 16 just cemented the fact that I won’t EVER get behind Tori and Chiaki as a couple. They are both endless pits of frustrating and stupid and STUPID put together and they just give me a headache. I’ll take the Trifecta and YukinaKisa over these pair of IDIOTS any damn day of the month. And AN-CHAN *squees and hugs her* BABY YOU SOUND SO ADORABLE LET ME HUG YOU TO PIECES. Uguuuuu you are SO much more prettier and cuter when animated~ AND ISAKA~ *hugs him too*

Yuu baby, forget about that idiot and find someone better. Like Iijun-sensei 8D Tell me I’m not alone with this crack pairing fandom. Don’t you think that Yuu and Iijun-sensei would be kinda hot together? YOU KNOW YOU WANT IT.

Chiaki is still a dense idiot who makes me wanna slam either my own or his head into a pile of concrete blocks. No really. If someone were to confess to me, I would NOT take it as a joke. I’d be overly conscious of it and just VERY VERY aware of it. *shakes Chiaki* DOU AHO! Do you NOT realize that brushing someone’s feelings off like a joke in that manner is just cruel and … CRUEL?! I mean, myself I’d be somewhere between heartbroken and forever PISSED at the person who’d keep saying that “hahaha what are you saying~ you’re joking right?” and then promptly resolve to never talk to that person EVER again….and why the hell do you have a bed that big anyways Chiaki? A bed should only fit like 2 pillows side to side, not FIVE. Y U HAVE THAT BIG A BED?!

Chiaki you an idiot of the highest caliber. A naive, dense IDIOT. Seriously, Tori is a bloody saint in some ways to put up with your particular brand of stupid. Blaming other people for your own stupidity? NO. JUST NO. And what Tori says in the end are just EXACTLY what my thoughts were. And EXCUSE ME? Blaming Tori for that?! BITCH COME OVER HERE AND LET ME SLAP YOUR IDIOCY AWAY. You. FLIPPING. IDIOT. *throws hands up and walks out*I will NEVER be able to get behind this idiot. OR THE IDIOT WHO IS IN LOVE WITH THAT IDIOT.

On the Ritsu, Takano front. I loved this chapter in the manga SO deeply. To me, this chapter was the point where Ritsu realized at some conscious level that “Yes I’m in love with Takano.” and he felt anxious and worried about what Takano thought as a lover. All in all, it was just a very significant chapter/episode. Because we also got to see precious An-chan *hugs her* Bb girl~ how are you more cuter animated eh? And I KNEW you’d have light brown hair but LAWD I didn’t expect that CUTIE PIE voice of yours. This is a pro An-chan blog and no An-chan hate will be tolerated cause the girl is a BABE. That is all.

Takano’s little smile when Ritsu stops him. My heart ached. THAT one little gesture just spoke SO many volumes uguuuu. *shakes fist at the sky with tears in her eyes* It was beautiful. Simply beautiful.

I gotta say though, Ritsu’s predicament when it comes to using his family connections….I get that to a degree. It must be so frustrating to keep trying to prove your worth and then finding out that “ah no your dad had a part to play in that”. And the poor boy just wants to prove himself and can’t. *pets Ritsu* Precious baby 🙁

Troll!Takano strikes again in this episode. YOU TOTALLY DID THAT ON PURPOSE DIDN’T YOU MASAMUNE?! I SWEAR YOU DID. There is NO WAY you just FORGOT. *laughs helplessly* You are SOOOO bad.

The animation for episode 16 was quality as always but 17 was comparatively, fairly buggy. Or well maybe just Ritsu looked more buggy than regular. Takano oddly looked more hotter than before Oo;; How’d that happen….not that I’m complaining on THAT one. But he DID look….different. Still, it was BUGGY. What was up with that Deen? Oo

Uguuuu the music for this series. *weeps* Why do I have to wait till December for this whimsical, romantic music?! Its NOT FAIR *more weeping*