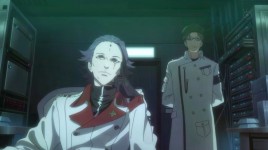 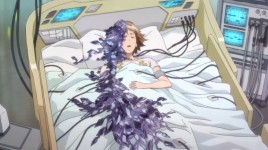 Seeing Yahiro shove Shu off the train and have him arrested by GHQ dumbfounded me last week, so this entire episode was one big surprise!  Yahiro’s still a jerk, but after seeing why he did that in the first place I can’t help but feel pity for him even though I know I should be angry at him.  Anywho, this week’s episode kicks off right where we left off; Yahiro pushes Shu off of the train and he’s arrested by GHQ.  Inori watches helplessly as the train begins to speed away, leaving Shu to fend for himself.  In a split second decision, she reaches for the emergency brake lever, but someone behind her tells her not to under Gai’s orders.  Inori obeys, but you can tell by the look in her eyes that she doesn’t think that Gai’s orders are right.  Meanwhile, Shu is being transported to the GHQ’s prison/detainment center and is silent the entire time, even though the commanding officer is asking for his help on a crossword puzzle.  Shu mentally reflects on what happened between himself and Yahiro and scolds himself for even believing that he and Yahiro could go back to the way things were.  As he agonizes over this, he silently allows himself to be stripped of everything and put in a detainment cell upon arrival.  One thing that seemed interesting was the fact that as Shu was entering the building, we got a shot of someone bound, gagged and surrounded by guards in the basement.  Somehow I get the feeling that he’s going to be playing a major role in not only this episode, but in the events to come.  The next day, we see Inori walking into class where her classmates are shocked (and one girl is devastated) to find that Shu has been arrested by GHQ.  The class rep says that she asked the teacher to confirm it, but no one knows anything else that’s going on.  Upon hearing this, Inori seems to be quite upset, though her expression hasn’t changed much as he walks into the classroom.

Meanwhile, at the GHQ headquarters, we see Shu’s captor – who’s name we find out is Makoto Waltz Seiga – is having a video chat with one of the higher-ups in the military.  The man is surprised that Makoto arrested Dr. Ouma’s son (apparently Shu’s mom works for GHQ at a remote facility?), but Makoto explains that he only arrested him on suspicion of working with Undertaker.  He then shows the man a clip from one of Shu’s interrogations and the entire time, Shu is silent except for the one time where he tells Makoto to ask Gai why he was there.  Makoto says that in short, Shu is a mystery and he intends to find out what sort of secrets he’s hiding.  Their conversation continues for a bit and we learn that Gai has warned GHQ that he plans on infiltrating the building to break out ‘his comrade’, though I have a sinking feeling that he doesn’t mean Shu.  Upon learning this, Makoto decides to transfer Shu to another building and in doing so, informs Shu that Yahiro isn’t actually a user of Norma Gene; instead, he’s a drug dealer.  Shu is horrified to find this out, but Makoto directs Shu to a large window over looking what appears to be a sick room where dozens of people are bedridden.  Makoto explains to Shu that Yahiro was trying to raise a large amount of money very quickly because his younger brother is suffering from Stage 4 of the Apocalypse Virus and he needs the money in order to continue treatments.  While it’s moving that Yahiro is so dedicated to his younger brother, it also doesn’t exactly pardon him from his actions earlier.  Shu seems shocked to find out everything, especially about Yahiro’s brother, but I can’t tell if he’s just shell-shocked or if he’s leaning towards forgiving Yahiro.  Makoto ushers Shu into a room overlooking the ocean and discusses a few things with him.  He explains what happened during the outbreak of the Apocalypse Virus and the day that’s known as “Lost Christmas” and how GHQ was the only company able to restore order. 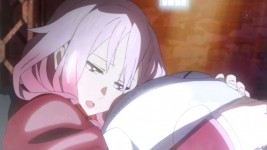 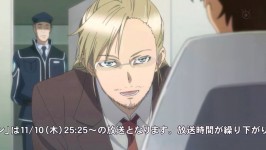 He then asks Shu why he’s working so hard to destroy the order they’re still fighting to maintain, but Shu demands to know why it’s alright for GHQ to continually murder innocent people.  Makoto simply tells him that it’s because they refuse to continue with the regular immunizations they need for the virus, so they become risks for triggering another outbreak.  Shu doesn’t seem to be able to decide whether Makoto is right or Gai is right and seems utterly confused by everything going on.  Makoto then takes the opportunity to give Shu a receiver that will transmit any audio directly to him and asks him to use it to gather information on Undertaker.  Shu doesn’t outright accept or say anything hinting to the fact that he’ll do as Makoto asked of him, but we also don’t see Makoto pocket the device after Shu is escorted to his room.  Here, we get a look at Inori after school, watching the video that Shu was working on for his club and singing along with it.  She then asks Funnell why she’s so cold and then muses that Shu would probably know why.  Later (I’m not sure if it’s the same day or the following day), Shu is taken into a room to speak with his lawyer.  Shu is stunned to see Gai walk in, completely fooling the guards into thinking he’s a legitimate lawyer.  As Gai is talking to Shu – and trying to keep Shu from blowing his cover – Tsumugi is busy hacking into GHQ’s surveillance system and essentially making the guards see at typical meeting with a lawyer while Gai is really telling Shu what he needs/wants him to do during the outbreak.  Gain informs Shu that he’s there to get his comrade Kenji Kido, who was arrested for the Sky Tree Bombing, and that Shu will need to use Kenji’s Void in order to ensure their escape.  However, Shu doesn’t take it lying down and starts shouting at Gai, demanding to know why Gai even assumes that he’ll help them since it’s their fault that he got arrested in the first place.  Before Gai can really say much else, the entire building shuts down, detecting a hacker from outside, and Shu is dragged from the room to be taken back to his cell for safety.  Instead, Shu punches the guard in the stomach and takes off, leaving Gai behind.  Gai becomes irritated and tells Tsumugi to begin phase 1 of the operation.

Shu runs around the building, managing to evade guards and their Endlaves before running into Ayase’s Endlave.  She scoops him up and tells him that because of what he did, their entire plan is gone and that she’ll never forgive him if Gai gets hurt during the mission.  Shu manages to get away from her – mostly because she has to put him down in order to properly fight – and he spots a young kid being blown away from the guards that were escorting him.  After staring at him for a moment, Shu realizes that the kid must be Kenji and he charges him and uses his Void.  Kenji’s Void apparently has anti-grativity abilities, so Shu uses those powers to essentially immobilize the enemy’s Endlaves.  We then see Inori jump over the top of the building and hurtle towards Shu (she also ignored Gai’s orders and went to rescue Shu), so he uses the Void’s power to use the water floating in the sky as a ladder to get to her.  As he reaches her, he asks her if he can believe in her and she says yes.  Discarding Kenji’s Void, he draws Inori’s Void and easily takes out all of the enemy Endlaves.  Makoto is watching Shu fight and is mesmerized by how beautiful it is (at least, that’s what he says!).  After everything is said and done, Shu heads towards where Gai and the rest of the crew are waiting with both Inori and Kenji – both of whom are unconscious – in tow.  Gai asks Shu once again if he plans on joining them and this time Shu accepts.  Gai nods and walks away, telling Shu to follow him.  As he leaves, Shu pulls out the receiver Makoto had given him and stares at it for a moment before putting it back in his pocket and following Gai. 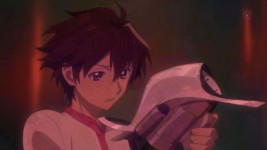 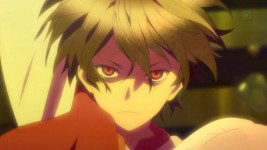 Opinions:  Holy crap, I really did not see any of this coming!  The introduction of Kenji will prove to be interesting, especially once he’s conscious and active in Undertaker again.  I do wonder if he and Shu will start fighting or if they’ll co-exist peacefully.  Seeing Inori so distraught over Shu not being there – but not understanding why – was both sweet and a little odd at the same time.  I’m starting to wonder if there’s something more to her than just being an internet pop star and Void user, or if she really is just that unused to social interactions.  Makoto was…interesting, to say the least.  Considering the fact that he just sort of stood there and watched Shu escape was either a moment of weakness for him or part of an ingenious plan to gather intelligence.  I’m personally leaning towards the latter option, especially with Shu still holding the receiver.  I wonder how that will turn out too.