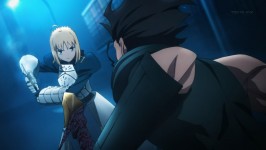 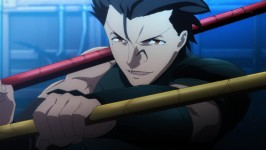 Double episode review this week, as these two episodes really flow into one another and really bring about one of the most intense, action packed and rivetting episodes from not just Fate/Zero, but any anime I’ve seen thus far. With twists, turns, surprises, laughs and some darn great character moments, Fate/Zero is really looking to trump the original series/game with nearly excellent everything.

These two episodes really were the first meeting for the many servants and for the masters to really gauge what they were up against. There were some splendid battles at the forefront, but also some great and intriguing battles of wit happening behind the scenes as well.

The fight started off with Saber and Irisviel taking on Lancer, with Kiritsurgu, Mai, Lancer’s master and Kirie all looking at the battle through the shadows. I said a few episodes ago that I felt that the real battle would be between Kirie and Kiritsurgu, but I was sorely mistaken. From what it seems like, the intellectual equals in this series are Kiritsurgu and Tokiomi. Each have a splendid plan in place and some really shady tricks up their sleeves. 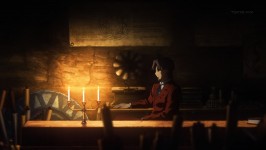 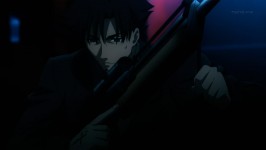 Both also seem to have really proud and rash servants too, in terms of Gilgamesh and Saber. Saber in particular, got quite the battle on her hands. She faced none other than Diarmuid of the love spot. I confess to knowing nothing of said hero until he was revealed. Turns out Diarmuid is  actually from Irish Mythology, something I’m not terribly familiar with. There goes my big theory on him being Robin hood XD.

Diarmuid was quite the opponent, and really out smarted Saber at every turn. The battle started out with both of them not really knowing each other’s weapons fully, but Diarmuid quickly closed that gap. By revealing one of his two Noble Phantasm the guy was able to gauge the length of Saber’s invisible sword and then go onto deduce that she was King Arthur, the King of Knights. The guy’s red Spear was enough of a pain: 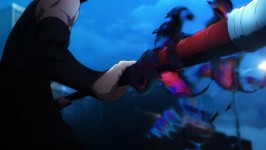 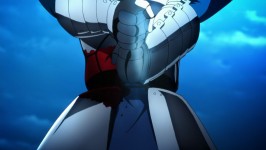 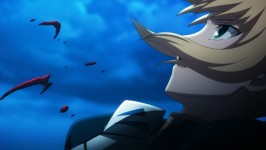 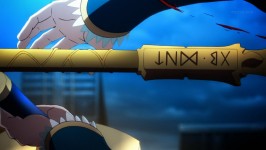 But not only did he have that super awesome Spear that could nulify magic, but also a cursed second spear whose wounds cannot be healed. After the battle, Saber was left at a huge friggin disadvantage. Having lost one hand, and had her identity revealed, I was expecting Kiritsurgu to have to step in.

Speaking of Kiritsurgu, the guy was indeed sniping from the shadows and would’ve easily taken out Lancer’s master, had it not been for Assasin popping up. It wasn’t all bad  for Kuritsurgu though, as he found out that the whole Assasin thing was  a huge feint. Of course, that sealed his movements pretty bad.

As things seemed to be heading to a conclusion, we  had a grand entrance by our own Alexander The Great  (Or Iskander? I’m of half a mind to just call him what he calls himself): 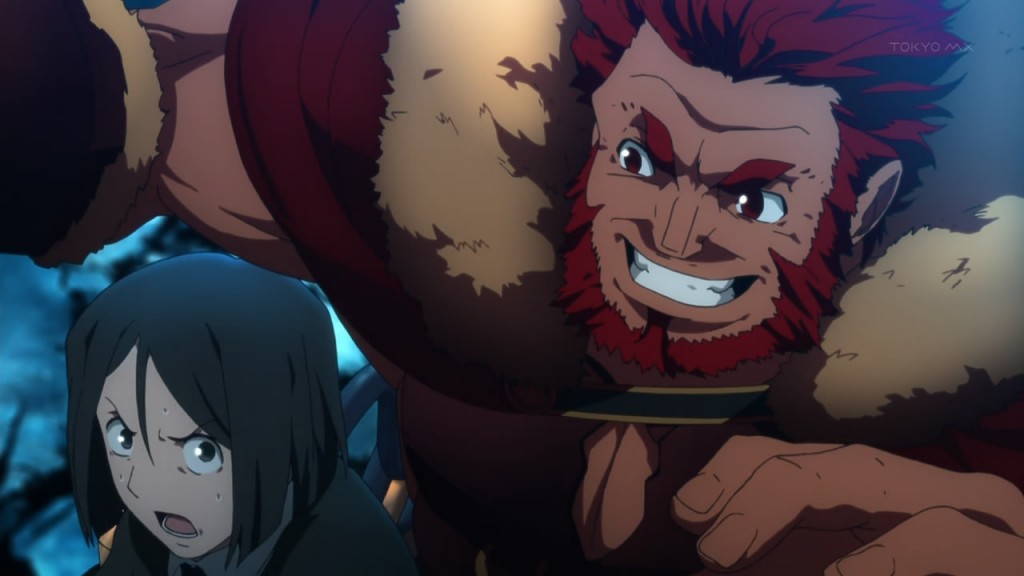 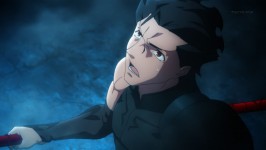 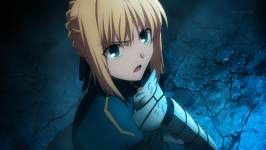 Not only did he crash the battle, but he did so while annocuning his name, his class and showing off his Noble Phantasm. Saber and Lancer were understandably, damn shocked! Waver too was pretty taken a back, understandably. Myself? I really enjoyed seeing Iskander do what he did. This kind of unexpected behavior was not only grossly entertaining, but very refreshing. As were his words afterwords, where he offered Saber and Lancer a chance to help him conquer the world. Both obviously refused, only interested in continuing their battle but it was around this time that the whole battle turned into a HUGE battle royale: 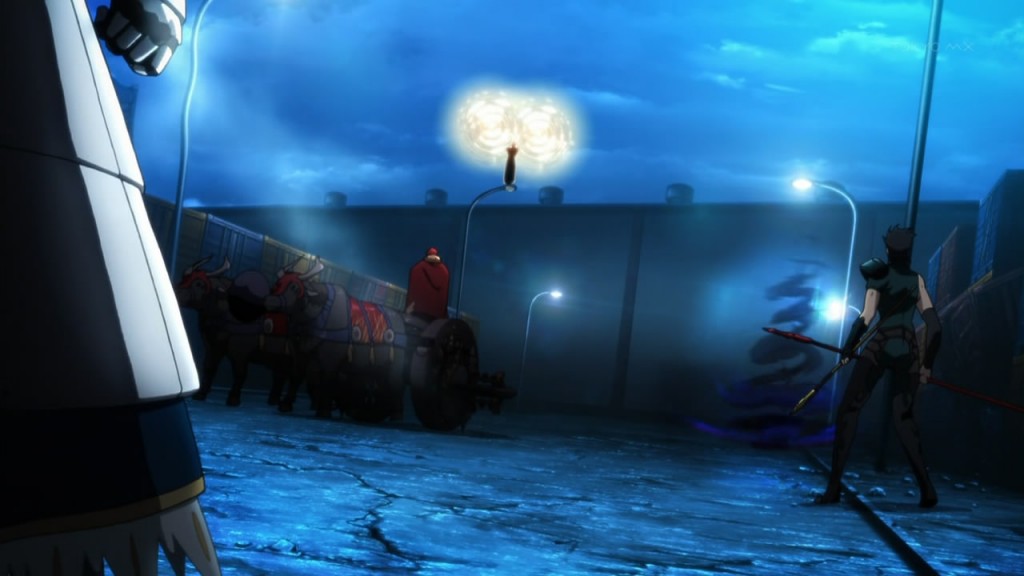 Gilgamesh vs Berserker vs Saber vs Rider vs Lancer!!! O_O

Not only did Gilgamesh show up, but he showed up intending to annihilate all those that had called themselves Kings, namely Saber and Iskander. It was kind of like a cry for attention in some ways, or atleast it hilariously seemed like it. I would not want to be Gilgamesh’s master, as the guy gets seriously ticked off waaaay too easily by waaay too many things. I meaan, as soon as Gilgamesh appeared, we had Berserker  come out, and the meare fact that Gilgamesh was being eyed by said creature threw him into a fit or rage: 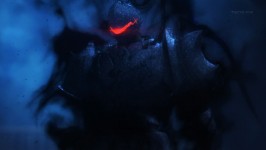 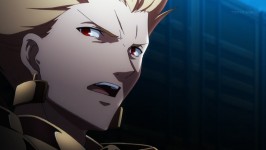 What really surprised me was that Berserker was able to keep up with Giglamesh. Gilgamesh has the friggin gate of babylon and every frigging noble phantasm at his disposal, and yet Berserker was able to easily take everything that was thrown at him. Gilgamesh only proceeded to enlargen the gate, and was probably wisely stopped by Tokiomi. Of course, what happened next, was just woah.

With Gilgamesh gone, Berserker attacked none other than Saber. Saber, clearly at a disadvantage, was barely able to fend him off. It was interesting to note that Lancer stepped in and prepared to take on Berserker. What was really disgusting and uncouthe in general, was what Lancer’s Master did next. He used a friggin command spell to order his servant against his will to defeat saber with Berserker. 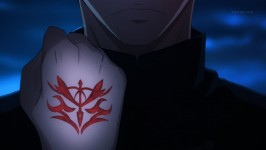 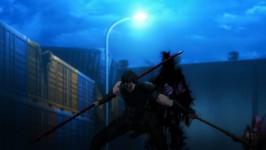 I mean Kiritsurgu and Tokiomi are both stealthy and shady, but this was just plain pathetic and disgusting. If anything, this made me really like Waver as a master. Iskander was a much better match with Waver, who at least has some semblance of decency, whoever small XD. It was all the more awesome to see Rider/Iskander not only step in and stop berserker, but also proclaim how pathetic and cowardly Kayneth Archibald (the master of Lancer) was. 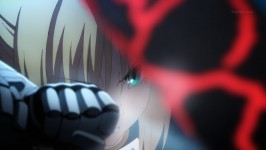 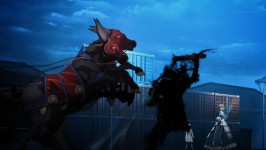 I think it was really nice to see a bond of sorts develop between the more noble servants of the war, namely Rider, Lancer and Saber. The three definitely share the same sense of honor and dignity and it’ll be interesting to see where stuff goes from here. Saber has to take down Lancer if she even hopes to function and battle at full strength.

There was an interesting battle of wits between Tokiomi and Kiritsurgu. Kiritsurgu was ready to take down Kayneth had it not been for Rider’s interference. At the same time it was lucky that he didn’t need to, as then the other masters would’ve been ready for surprise attacks from him. 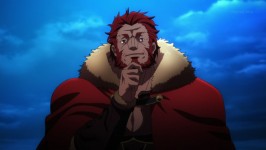 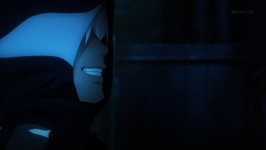 We have some interesting rivalries forming. There’s the whole rivalary between Kayneth and his student Waver, there’s Kiritsurgu and Kirie/Tokiomi, and then finally there’s Tokimoi and Matou Kariya. Kariya has it seriously in for Tokiomi, which is understandable, because he detests what Tokiomi did to the woman he loves and her daughters.

The final bit of creepy was Bluebeard having his eyes on Saber: 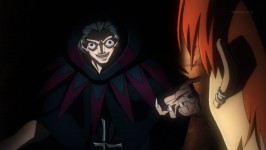 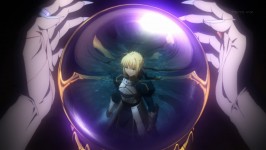 Finally I’d like to say that the production values for this show and these two episodes remain awesome. The battles and action did not dissapoint, with some very jaw dropping motion and awesome special effects. With these two episodes, Fate/Zero has established itself as one of the best series this season, if not the best. I can’t wait to see more. Next week my review should be on time too! XD