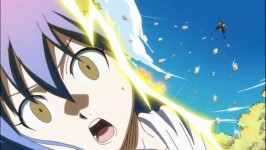 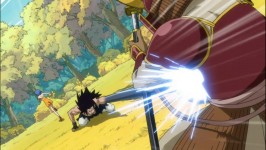 Holy Wow! This episode was definitely one the strongest character driven battle episodes I’ve seen in Fairy Tail yet. The episode really focused on one of the most interesting characters in Fairy Tail and really gave an answer to one of the nagging questions I’ve had for a while. It also kick started the most epic battle that’s about to come, and really gave us an idea of how intense things are going to get.

The episode primarily focused on our favorite villain turned good guy, Gajeel. I must say, this episode spoke volumes about the guy and his character. I’ve always felt that Gajeel kinda got a free pass as far as stringing up Levy and kidnapping and causing issues for Fairy Tail went. We really saw the inner turmoil that’s been going in inside him. Gajeel was one the dragon slayers that was unlucky. Unlike Natsu, who winded up in Fairy Tail, the nicest and most homey guild, Gajeel winded up with Phantom Lord. Gajeel is the very personification of the young and generally good natured person that just fill in with the wrong crowd. 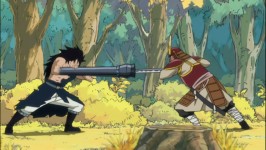 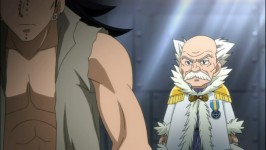 I really liked how they showed the flashback of Makarov asking Gajeel to join Fairy Tail. I really wondered what happened there, and it was really touching to see that scene. It was also interesting to note, that while Makarov pretty much wanted to prevent Gajeel from falling into the darkness, he really didn’t forgive Gajeel’s actions prior to that point. That’s something Gajeel has to live with I guess, and its something he really did try his best to atone for. The guy isn’t proud of who he was before he came to Fairy Tail, and it was amazing seeing his vigor and determination to prove himself.

I don’t care what Makarov says, Makarov totally saved Gajeel. I mean, Gajeel was strong before, but the kind of determination and intenseness he displayed in his battle this episode? You can’t create that kind of resolve from pure manipulation, like what happened to him in Phantom Lord. And man… was Gajeel friggin badass. It was awesome finally seeing his secret Dragon Slayer art, which seemed inspired from Panther Lily’s huge ass sword: 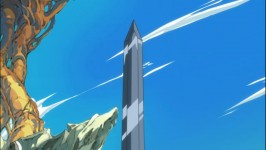 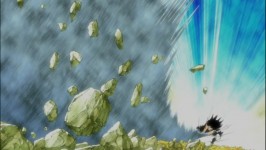 It wasn’t just Gajeel that was badass though. Levi also really pulled her weight. I know she’s probably considered pretty weak by most of Fairy Tail, but she really held her own in this fight. When Gajeel was incapacitated by the Words magic, She not only cancelled it out, but she also hurled both of them out of harms way. Also, giving him the iron to chew on and replenish his power was a sweet touch. I also noticed the heart that popped up in the words Iron. Its official, levi and Gajeel may very well be my favorite couple ship in this series.

And apparently I’m not the only one who thinks so, since Juvia was pretty jealous after seeing the two of them walk off together: 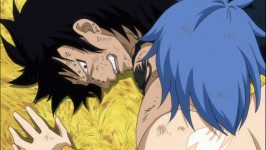 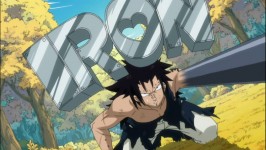 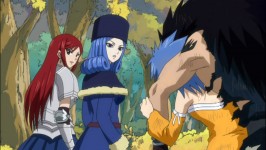 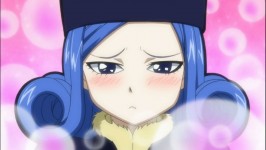 Beyond Gajeel taking down his two opponents himself, everyone kind of got wind of Grimore Heart coming just as they’re about to descend. Gajeel really did make the right call and send Levi to let everyone know what was going on. Erza suspending the exam and preparing everyone for a battle was pretty quick reacting, as expected of her.

I was a bit surprised by how selfish Cana acted when the call to arms  went up. I mean, I know she has her reasons for wanting to finish the exam, but when the entire guild is under impending attack, there are definitely more important things to do. Priorities woman! Priorities. I think Lucy kinda seemed a bit shocked at Cana as well: 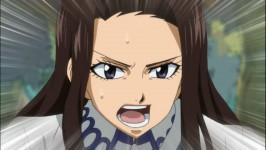 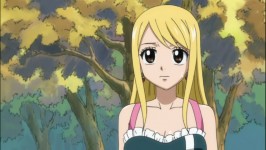 This might be the first hints of that split between Cana and Lucy that we see in the OP. Cana might end up continuing the exam while Lucy heads to the battle to help everyone else.

Oh and when you’re mentioning badass in this episode,  you can’t forget Panther Lily: 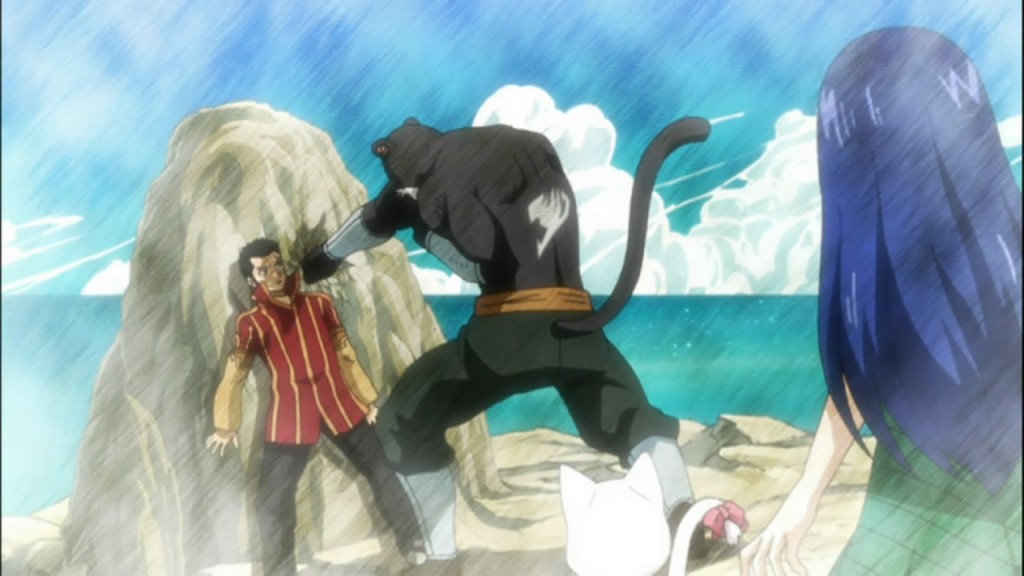 When Panther Lily wants his answer, YOU ANSWER!

Really good job just rushing in there, and making sure Mest knew not to mess with everyone. I wonder what will happen if Panther Lily has to actually fight Mest head on. He can’t keep his large form for very long after all. I will say that, as badass as Panther Lily is, I’d rather not support the idea of Him x Carla. This image causes me some worry though:

That said, All in all awesome episode. Gajeel, Levi and Panther Lily were all badass. I’m excited to see what happens when Grimoire Hearts launches their full scale attack!

Seems Makarov is going to go crazy as Grimoire Heart unleashes their full scale attack on Fairy Tail next week. See ya then! =D