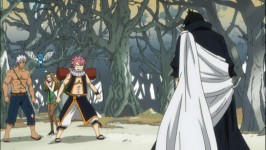 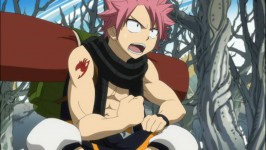 With this week’s episode the story for the S Class Advancement Exam takes a whole new direction. We have some explanations as to who Emo boy is, and we get some developments into what will probably be one hell of an interesting arc. Added to that, we also got some romantic hints from a potential new couple XD

First things first, the big reveal this week was who the Dark Haired guy who I keep calling emo boy is. It was definitely surprising to find out that the guy is actually Zeref. THE ZEREF, the most evil, most powerful mage in all of history. Not only is the guy apparently still alive, but he seems to know Natsu. In many ways this reveal was a real surprise. I expected Zeref to actually be someone related to Natsu, and he probably is, but that relation isn’t what’s revealed in this episode. Rather, he just briefly meets Natsu and makes the assessment that Natsu still can’t destroy him. I was about to scream at my screen in anger at the really dirty tease, when the series proceeded to explain it through the Dark Guild, Grimiore Heart. 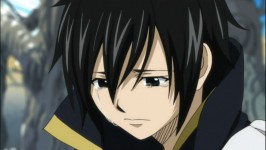 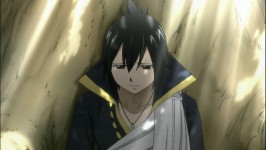 Of course this little reveal leads to a lot more questions, ones that I’m sure will get answered as we proceed further into this arc. The big question on my mind is how Zeref knows Natsu. I’m sure there’s a curveball or some manner of plot twist related to this further in the arc, and my speculation can lead to a few scenarios. The first, is that Natsu is probably the son or descendant of Zeref, probably at a time when Zeref either knew regret, or became good. The only person who can probably take out Zeref is someone of his own bloodline, and therefore he’s been waiting for Natsu to get strong enough to destroy him. Leaving the kid with Igneel was probably part of the plan as well.

Now the reason I keep thinking that Natsu and Zeref are related is because of how loving Zeref keeps referring to him. Phrases like “you’ve grown up to be strong” and then the whole crying when he first saw him. Both of these are indicators of some manner of reflection.

The other scenario that I can really think of is that there was some ancient prophecy that told of Natsu being the one who would kill Zeref. Maybe Zeref, or this current version of him, is so sick of himself, that he felt pure joy when he actually met the person who would take him down and kill him? I can’t be sure. I have a feeling that the later scenario is more likely, because I doubt Fairy Tail would pull the “I AM YOUR FATHER” card. You never know though, and if its done tastefully enough, it could be quite good

What can be said for sure, is that Zeref right now, is not the original Zeref. The dark Guild has pointed out that they need to awaken something within him. Now I’m guessing that that part of Zeref is probably evil, and the part that created all the dark magic. I’m also guessing that Zeref or someone else sealed that side of himself, in order to stop all the havock and destruction that was being unleashed on the world. Grimoire Heart, the Dark Guild, is now looking to awaken Zeref fully, in order to get their hands on the ultimate Dark magic knowledge.

Grimoire Heart is an interesting collection of villains, but I’ll look into them more as we enter their personal fights with Fairy Tail. For now, It seems like we have a Goat Guy with Shades, Ultear, A pale Sumo Wrestler, A yelloy Dark Dragon Slayer, and another dude with grey hair and shades XD 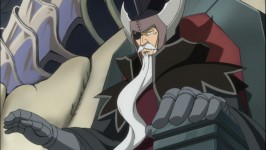 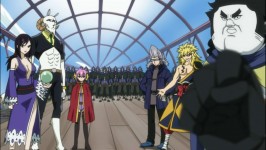 Now, in a strange twist of fate, Zeref just happens to be on the Island where the strongest official guild Fairy Tail, is training its strongest new Mages to become S Class Mages. Once again, it seems that Fairy Tail is the last line of defence from the world falling into Chaos. Gotta wonder how effed up the new Magic Council is, wanted them disbanded. The only real threat even Grimoire Heart feels to their plan is Fairy Tail, and hence is waging an all out war with them.

And this war, is the crux of this arc. I gotta say, I was expecting the strongest Dark Guild to come into play much later down the line in this series’ story. Its quite awesome to see that the story is really proceeding to a full out conflict between Fairy Tail and them. Of course, this war comes at the worst possible time for Fairy Tail. They’ve lost two of their strongest S Class Mages recently. Both Laxus and Mystogan are gone. Mirajane hasn’t fought in a huge while, and some of the strongest Fairy Tail have already left the Island. With Gildarts gone, the only three S Class mages left are Erza, Makarov and Mirajane.

This means that the burden of this battle is thrown onto Fairy Tail’s next generation of Mages. This also means that, quite frankly, if they make it out of this alive, they all NEED to be promoted as S Class. It also means that no amount of qualification exam could prepare them for an all out war. Just thinking of who will face who really makes me darn interested. There’s so many pairs of characters, that it will be beyond interesting to see who takes on who, and more importantly, how many battles Fairy Tail will win. 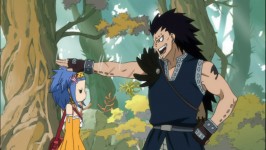 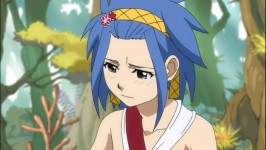 The first battle actually began in this very episode, in the form of Gajeel and Levy taking on Yomazu and Kawazu. Before that whole thing began though, it was pretty cute to see the little scene between Levy and Gajeel. Its fairly obvious now, that Levy has feelings for Gajeel. To be honest, who can blame her? Gajeel has been saving her ass multiple times, and doing it rather selflessly. I’m not a fan of flashbacks, but this particular batch of flashbacks seen in the episode, really reminded us of how Levy must feel about Gajeel. I’m not surprised that she’d feel hurt when she thought that Gajeel was just here for the action, rather than for her. 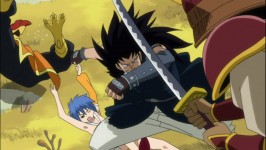 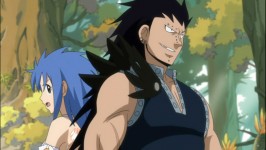 Now as for Gajeel’s motivations, I don’t doubt that the real reason he’s here is for the action. That said, though, he could have offered his help to someone  else. Cana needed help too for example, but he decided to help Levy. I think if nothing else, there is some amount of attention from Gajeel to Levy. Her little monologue about hating Gajeel, but seeing all the great things he’s done for her, was pretty interesting. It made the scene where he came in protected her from Grimoire Heart all the more awesome.

I’ve been a big proponent of the Dragon Slayer Trio in the past, but honestly, I like the Gajeel x Levy combo. Gajeel is strong and powerful and Levy is the big brains, more so than even Lucy. If it hadn’t been for her confusing feels for Gajeel, I’m sure she would’ve figured out where the grave is before Lucy. It does need to be said though, that Gajeel was the one who strung up Levy on that wall ages ago.  With all that said, you gotta hand it to the mangaka for making us love so many characters. I can honestly say that I love and route for all the characters in Fairy Tail.

With the big and real context for this arc set into motion, I’m excited to see the big war between the Dark and Light guilds in the upcoming epsiodes. Fairy Tail continues to go awesome!