Kimi to Boku does it again. Being able to make my sensitive and girly side go “aawww”. Kimi to Boku has definitely become my favorite anime this season. I just can’t get enough of all these cute boys doing the cutest things. Oh man, hurry up and come into the story already Chizuru!

Alright, somewhat brief summary because right now I am way too excited over the next episode preview to make any sense of anything. 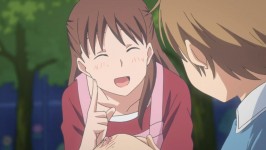 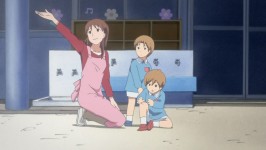 Summary: Flashback story about Shun, Kaname, Yuuki and Yuuta from when they were in Pre-School is showed. In this flashback, Shun worries over the Tulips not being able to grow because of the heavy snow. Even though it is extremely cold, Shun scoops up all of the snow so that the Tulips can grow safely. The other three boys then show up and Kaname tells Shun that Tulips are much stronger than they look and that they are able to withstand snow. Also, we learn that the twins were already pretty alert at the age of pre-schoolers, even going as far as teasing their teacher, Kaori-sensei. 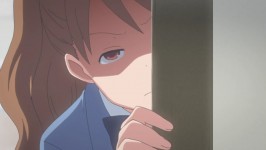 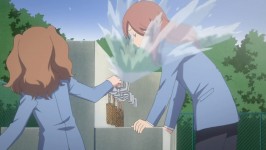 Back to the present, Shun is having problems with a short girl (Masaki) that he gave a band-aid too when he saw her scraped knee. Masaki, not liking the fact that Shun worried about her, tries to get revenge on Shun for making her feeling useless. Of course, poor Shun has to suffer the consequences of Masaki’s anger. From replacing his books with a stash of porno magazines to shining a reflective light into his eyes, Shun has to endure. At first, Shun did nothing to stop Masaki, thinking that he probably deserved and actually feeling a bit bad for her because of her socializing problem. However, not long after, Masaki’s behaviour starts to get out of hand and Shun’s friends begin to be affected by it as well. It isn’t until Masaki takes it too far and accidentally hits Yuuta on the head with a rock that Shun gets mad. 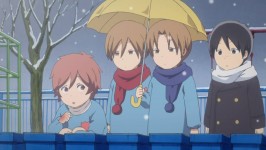 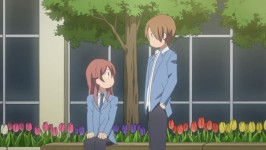 Shun chases after Masaki and tells her that he is the only one that she should be mad at. With Yuuta’s skirt peeping, it turns out that Masaki is actually still wearing the band-aid that Shun gave her. Masaki cries and we hear her reasons over why she was so mad. Turns out that while she was actually mad at Shun for worrying about her, she was actually happy and grateful that he worried about her and didn’t ignore her like everybody else. In the end, Shun and Masaki make peace with Masaki asking to please lend her more band-aids in the future. 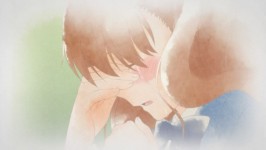 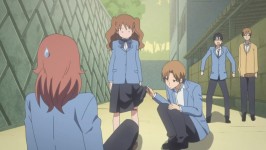 Impressions: I never really cared for Masaki much. I don’t exactly like her nor do I dislike her. I’m just pretty “meh” about her. I remember when I first read the manga a while back ago I disliked her but alas, I’ve long since dropped that dislike for her. Shun was very sweet in this episode. However, I still just can’t get used to his voice. I wanted something softer but oh well. Beggers can’t be choosers.

On another note, I am still loving the flashback and the watercolor work that the anime features. J.C Staff has always been one of my favorite studios because of their lovely watercolor works that they put into their animes.

Moving on, the thing that left me the most excited this episode was the appearance of Chizuru, the fifth and final guy, in the preview. I am soooo excited. 😀 Next week, come to me already!!! Please!! Give me Chizuru. *.*