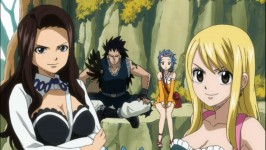 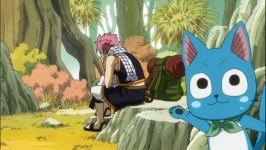 Its here! Episode 100 of Fairy Tail. We’ve been following this series for about a hundred weeks! It seems that I’m the person who’s more excited about this prospect than the series itself, but hey, that’s okay. Fairy Tail is fairly uncompromising in its story, and that’s one of the reasons why its such a joy to watch every week.  This week, we dove into who exactly Mest was, and not only that, Natsu ran into the other major element of this arc…. ALREADY! I’m beyond shocked at how Fairy Tail’s latest arc refuses to pull any punches. In many ways, its of the quality that one of my favorite series of all time, Durarara!! is, in that it doesn’t hold anything close to the chest and just does whatever the viewers are most excited to see, adds more mysteries as it shows those exciting events, and then moves on to the next one.

Before I got into the episode, I’d like to turn your attention to our “I’m a Fairy Tail fan” Contest.

I definitely remember saying I’d do something special for Fairy Tail’s 100th episode, and since its been around 85 episodes or so that I’ve covered for the series, I’m in a huge mood to celebrate. I also really want to thank the people who make this reviewing thing such a joy, because only half of the fun is writing about something, the other half is listenning to what other people say and add to it. So in a lot of ways, this contest is for you guys! Please go check it out, tell anyone you know who loves Fairy Tail, and definitely enter! =D

With that out of the way, lets take a look at this episode shall we? In many ways, this episode felt like a breather episode between the intenseness that we just saw in terms of Natsu and Gildarts and their epic battle. At the same time, there were some really awesome moments in this episode that really make me ever the more excited about this arc.

A running theme in the episode, was about Mest. As everyone thought about Mest, they really couldn’t remember a lot of details about the guy. Added to that, Panther Lily echoed the very important question that has been plaguing the back of my mind as well. “How did Mystogan take a pupil?” Very very Good question right there. I just assumed that since Mystogan had met with Wendy, he might have met with some other person just like that. The foreshadowing from this episode is definitely saying one thing: “Mest is not of Fairy Tail”.

The first signs of this came after Gray and Loke easily took him down. If he had been good enough to almost reach the end of the S Class Exam last year, then its beyond surprising how they took him out. Gray considering this, and realizing he didn’t know a lot about Mest was definitely a sign for worry.

Its plain as day now that Mest is not part of Fairy Tail. He also kind of elluded to his purpose in infiltrating the S Class Exam while talking to Wendy. So basically Tenroujima Island is inaccessible unless Fairy Tail itself lets someone on there, surrounded by powerful barriers. Not only that, it houses a big secret related to Fairy Tail. This just reeks of awesome. In many ways, Fairy Tail just seems like something Makarov put together, housing all the problem children and weird mages that would have no where else to go. In actuality though, Fairy Tail is actually a pretty sacred and ancient Guild, with a good deal of history in it. The whole idea that Fairy Tail may have some big secret, something worth protecting from everyone, is just made of win.

My best is that Mest is from the magic council, and I’m sure even they have no idea about what the secret is. Don’t confirm or deny this in the comments guys, as obvious as it is, I’d like the series itself to confirm it XD. Regardless of who Mest really is, things look  bad for Wendy, as she is on a cliff, with an evil looking Mest right behind her: 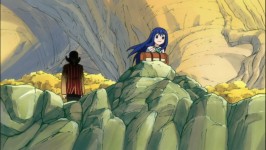 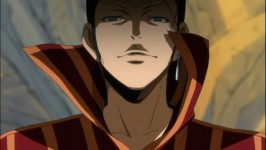 Carla’s worrying was not for naught. As Mest seems to lead Wendy around, Juvia and Erza search for her. We also got the conclusion to the Mirajane and Elfman+Evergreen fight. I chuckled at the whole trick Evergreen used to get past Mirajane. Bwahaha, Good stuff there Evergreen, telling the sister that you’re marrying her brother. I gotta admit, its the sleazy way to get past someone for sure, but I guess it suits Evergreen. The little comments by everyone on how Evergreen and Elfman might actually make a decent couple are actually quite true. I didn’t think about it before, but Elfman and Evergreen would make an interesting, unqiue and unconventional couple. I’m fine with shipping this couple XD

So with that, We have Natsu & Happy, Gray & Loke, Cana & Lucy, Gajeel & Levy and Elfman and Evergreen as the teams that made it to round. Erza obviously did not let Juvia pass at all, and Freed, Gildarts and Bickslow went back to the guild. I felt bad for Gajeel, as the guy really didn’t get a chance to fight at all. Good for Levy though, as she got through without much problems.

And thus, we went into the second stage of the exam. Now this seemed like a rather simple test after the last one, since all they really need to do is find the Grave of the first Guildmaster in 6 hours. It was soon shown that everyone had to deal with the various huge creatures on the Island. Everyone was pretty much hiding and running for their lives; 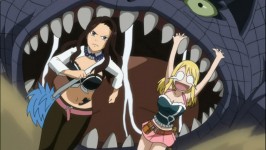 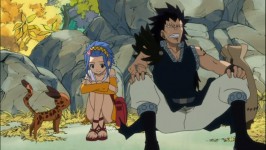 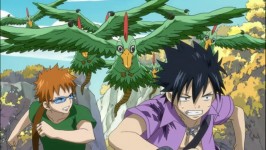 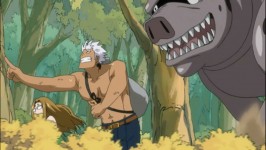 Except of course, for our dear Natsu: 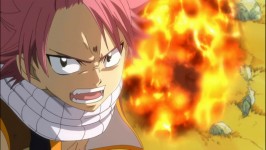 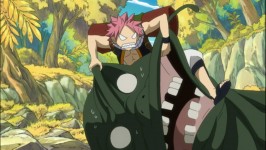 I liked the added comedic value of Natsu not only trying to get information from the monster he took down, but it also answering him XD

And then, Fairy Tail decided to unleash the awesome in its last few minutes again. As Evergreen and Elfman shared a cute little moment of tsundere goodness, they ran into none other than Emo Dark haired boy. Emo boy (I have to refer to him as such until the series tells me his name XD). Now it seems I was wrong about Emo boy’s powers only working during the night. It seems he tries to repress the power for as long as he can, but apparently sometimes it just rips out.

It explains why the guy chose to come to Tenroujima Island. As far as the powerful barriers go, one would not expect many people to frequent the place. It was really sad to actually see Emo boy trying to get away, but ending up bursting his powers out anyway. Just as I thought it may very well be the end for Evergreen (as we see in the OP), Natsu jumped in to save the two! 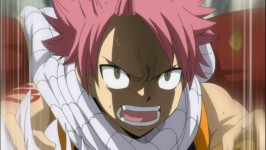 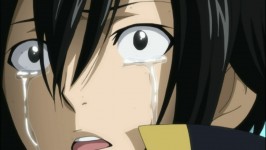 And thus! We get the episode ending with Natsu confronting a tear stricken Emo boy, who really seems to be beyond happy to see him. Awesome cliffhanger, and I cannot wait for answers as to who Emo boy is, and what his relationship to Natsu is.

So once again, awesome episode from Fairy Tail. Trouble’s a brewing from Mest, and we got the meeting betweeen Natsu and Emo boy took look forward to. Once again, I’d definitely ask you guys to enter the contest and spread word about it!

Next week seems to focus on Gajeel and Levy. It also seems like the Dark mages will begin to move! =D