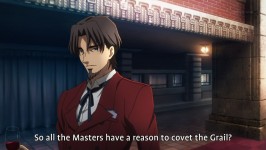 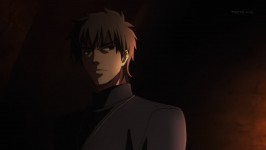 Fate Zero kicks with a fantastic 1 hour premier that introduces to all the master in great detail, melds detailed links to the original Fate/Stay Night series and it even goes the extra distance with some new and interesting twists on previously known characters. If Fate Zero’s first episode is anything to go by, this is going to be an AMAZING series!

Before anything else, I will say that this is definitely a series for those of us who are extremely familiar with the Fate/Stay Night franchise. You have at least had to have watched the original series. Having watched the amazing Unlimited Blade Works movie and having played the Visual Novel game only enhances the experience. As a fan of the Fate/Stay Night franchise, I’ve seen and experienced everything except the Fate Zero novels. I can already see why animating them was such a darn good idea.

This first episode served as sort of a mini-movie as sorts. It introduced all the major masters, and established why they’re fighting in the Holy Grail war. I must say, I love Fate/Stay Night, but the reasons and ideologies of all the people fighting this Holy Grail war are a lot more deep and realistic than that of Tohsaka and Shirou’s. If anything, I can see that this war was really the main one, and one that left such ripples in reality that the second Holy Grail war was more of a low key aftermath battle.

Now… if you’ve played the original Visual Novel (which I’m guessing not a lot of people have), you really got to see just how dark the franchise can actually be. The third path of the game in particular (one of three routes you can choose in the game to reach one of its three endings) was the darkest with really scary stuff in there. Fate Zero seems to be following along those lines, and this is probably the darkest we’ve seen the franchise yet. 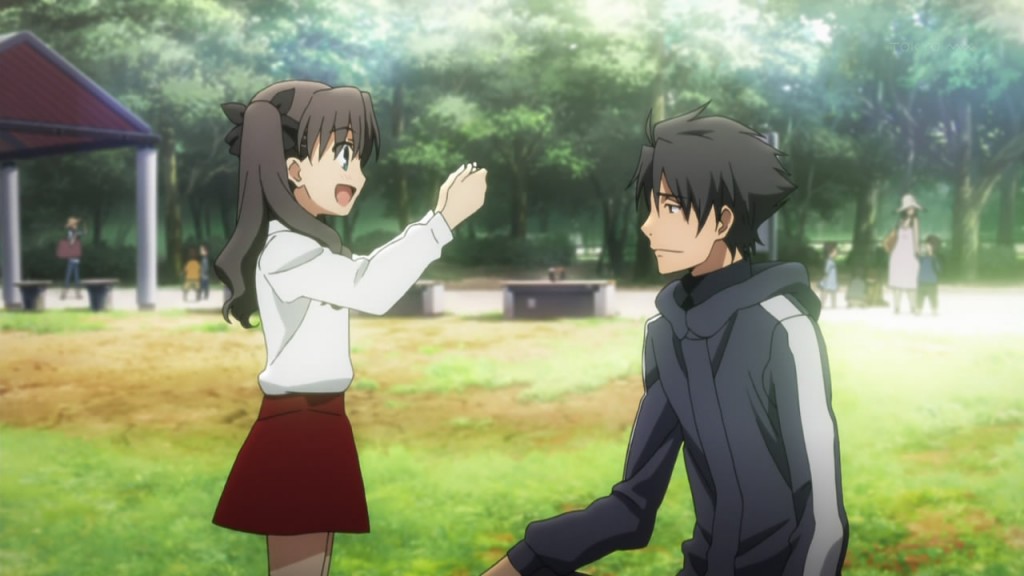 The series develops its known characters and adds new ones!

The real major thing that I got out of this episode was that it actually added some depth and history to some of Fate/Stay Night’s characters. Sakura for example, was actually Rin’s biological sister (Which is mentioned in the game’s third path). This was something, I had not paid particular attention to at the time.. It was a real eye opener though, and the way Sakura was twisted and mutilated by the Motou family from a young age was just horrific. Its no wonder she appreciates and eventually falls in love with Shirou, who’s the kindest, nicest guy you can ever see.

We also got to see more Rin and Shirou’s parents, namely Emiya Kiritsugu and Tohsaka Tokiomi. Wow were these two characters a  far cry from what they were shown to be or hinted at in the first series/game. Emiya Kiritsugu was not the guy that Shirou had looked up to and loved and idealized. In the series, Kiritsugu is a dark, cold hearted man with a mission. He’s confused, he’s hardly even remotely close to kind. Its kind of interesting to see just how much the Holy Grail war will change this man and how he’ll end up being a sort of hero in the eyes of his future adopted son. 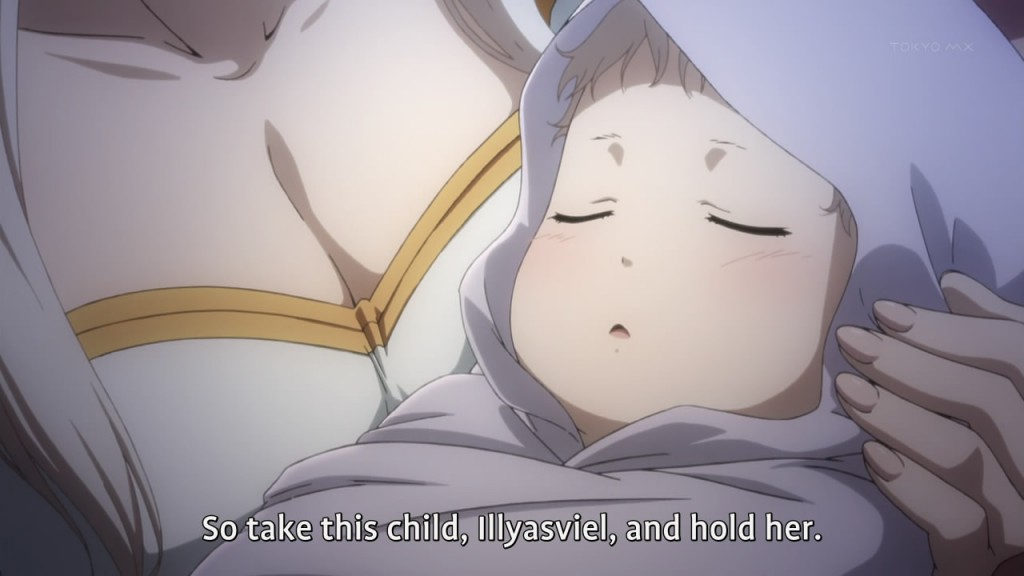 What also was shocking for me, was that Iliya was actually the daughter of Emiya Kiritsugu. So technically, Shirou is indeed her brother, if only because his adopted father is the biological father of the girl:

Again, a really nice little nugget of information for fans of the franchise. You really get to see some clear origins and understand why Illya turns out the way she does in Fate/Stay Night. She pretty much loses her parents and becomes another pawn for a magus family to achieve their goals. Its really twisted and kind of sad, but its a running theme in the series I assume. The Magus families really are all types of fucked up, and this war can only lead to the head on collision of some really twisted people. 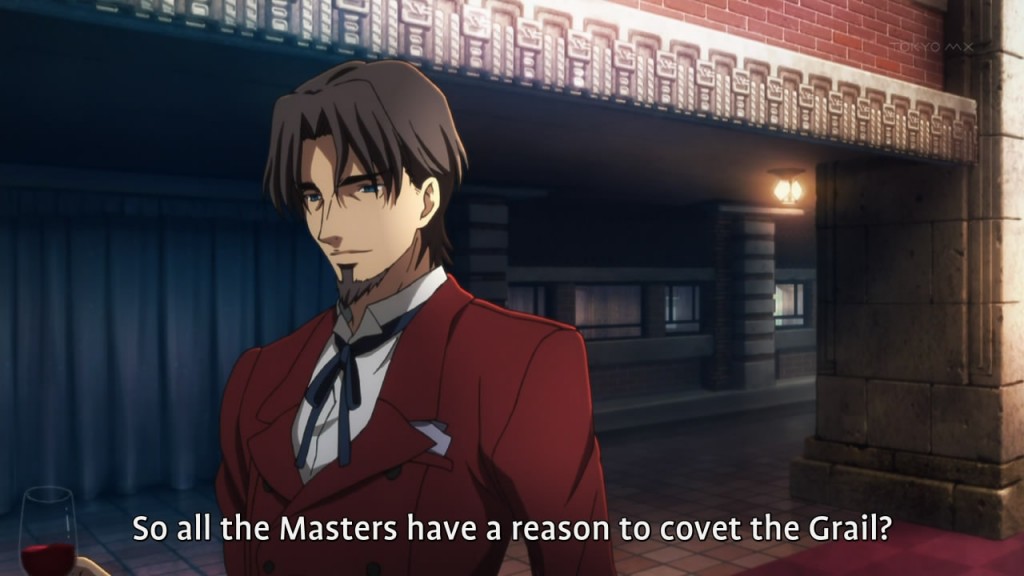 Rin’s papa-san… A far cry from Noble and Kind.

Speaking of twisted people…. Rin’s father Tohsaka Tokiomi. Wow… does that guy just  oooze pure evil. You’d think that because the  guy was related to Rin  Tohsaka he’d be at least semi noble. The guy seems like an evil twisted mastermind whose only goal is to get what he wants. As far as I can tell, he doesn’t seem to care much for his wife or daughters. Yes, again, he willingly gave his daughter Sakura away to the Mutou family. That’s just all types of twisted waiting to happen. If anything, the series again shows that Rin really knew nothing of what her father was… 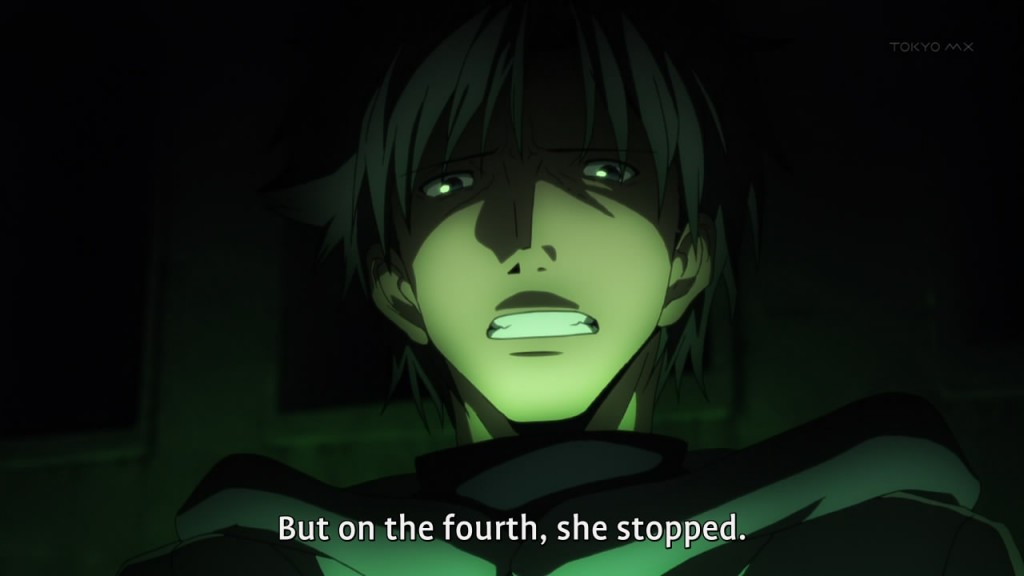 Kariya horrified at what had been done to young Sakura!

Now directly related to Sakura and her adoptment is Matou Kariya. Kariya is definitely one of the more tragic characters of this story. Its obvious he loved Rin’s mother, but because he decided to go against a life of magic, he pretty much lost a chance to be with the woman he loves. Instead, the kind guy ends up caring for her and her daughters. Its kind of sad that when Kariya finds out about Sakura and how the Mutou family took her, its he who ends up stepping up to protect Sakura. I guess it might be because Sakura’s mother Aoi had no idea about how twisted the Mutou family’s magic is, but it still doesn’t excuse the fact that she just gave away her daughter like that. 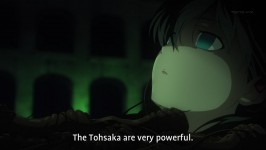 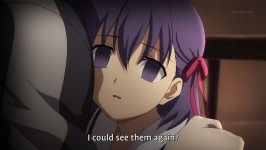 Like I said before, these magus families are all types of twisted fucked up. Kariya, being the one sane and kind person, decides to literally sacrifice himself so Sakura can be freed from the horrible stuff that the Mutou family is putting her through. We all know and realize that he doesn’t really succeed, as Sakura is still with the Mutous in Fate/Stay Night. We do know though, that he is able to sheild her to some degree. Either way, its a sad story, and I think if its one character that I like and am rooting for, its Kariya. 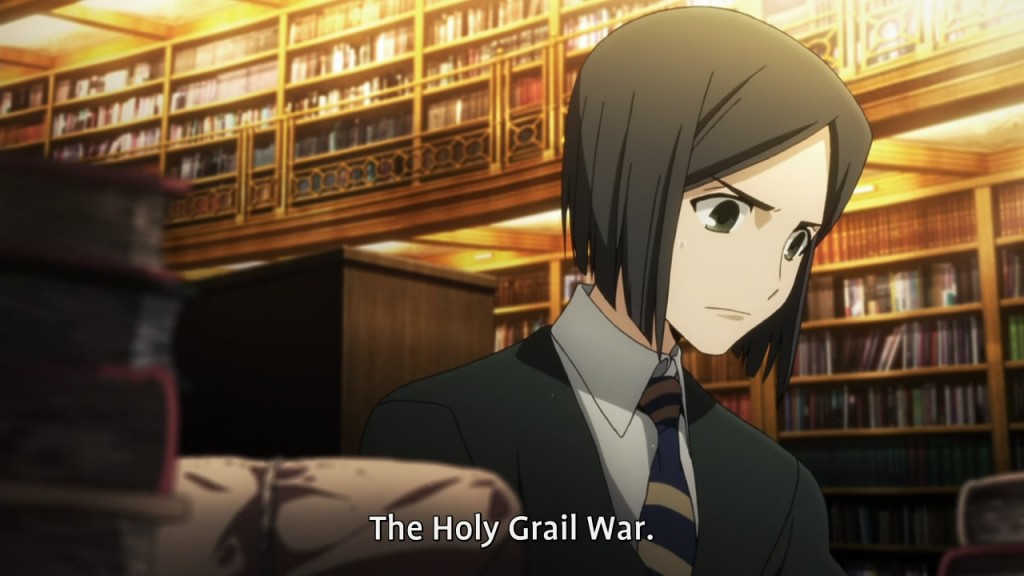 The other master we saw was some kid (Waver) from the Magus Association academy that grabs one of his teacher’s relics and books and ends up becoming a master. I’ll say this now, this guy, may have the coolest, most friggin awesome Servant out of all em. I’m not exactly sure who it is yet, but that King just looks all types of bad ass. 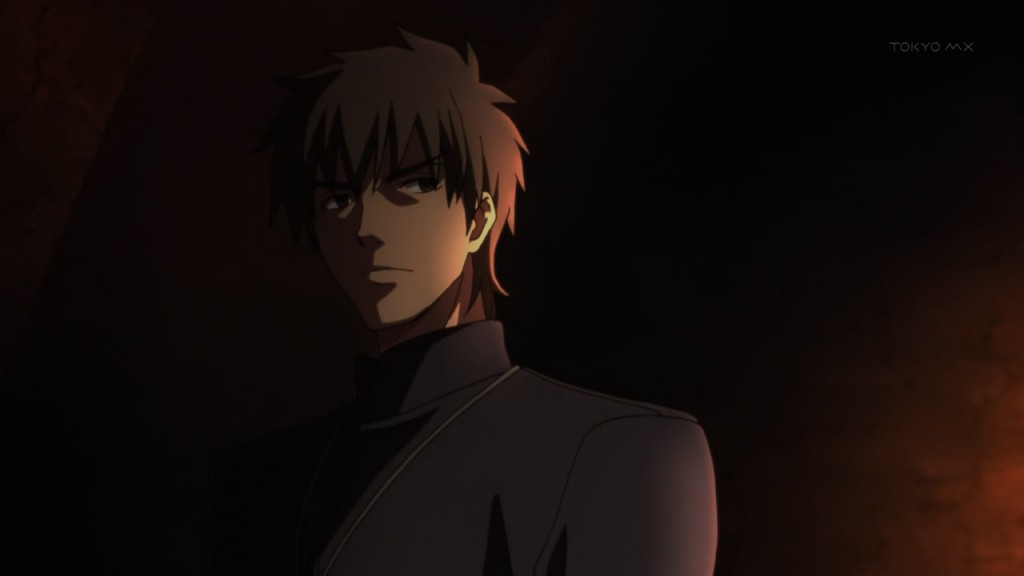 A very different Kirei to the one we all get know!

One person of particular note is Kirei. We all know Kirei, he’s the eventual villain of Fate/Stay Night that Shirou ends up facing and defeating with Tohsaka. I’m really curious to see how his character is built up. He’s far from the scheming, twisted Kirie we know in the second series. Right now, it seems like the guy is kind of confused and searching for answers. I can already see that he and Kiritsugu will end up forming a sort of friendship or rivalary. Their whole relationship and dynamic is probably going to be one of the big things in Fate Zero, and one that I’m really excited to see. 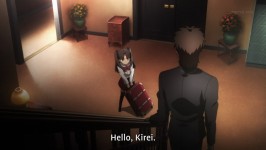 We also get to see a small Rin, as she interacts with Kirie. I doubt we’ll see more Rin in this series, as she’s kind of the main heroine of the Fate/Stay Night storyline. It was nice to see her as a kid, and what she kind of had to go through.

All in all, it was just awesome seeing the masters finally summon their servants.

Tokiomi managed to summon none other than Gilgamesh, another big player in the Fate/Stay Night storyline:

We really can’t see what Kariya got, but it seems like something really dark and twisted.

And of course, the kid with his King servant dude:

Before I close this review/first impressions up, I’ve got to say… Wow @ Animation. This is one pretty looking, jaw dropping series. I mean, I know ufotable has done a smashing job with the Garden of Sinners movies, but I was not expecting this level of quality in a TV production. Not only is the story super awesome, but the visuals are just breath taking!

That said, this was a great first episode. As mentioned earlier, I don’t think this a series for anyone except those who are very familiar with the Fate/Stay Night franchise. For those of us fans that are though, this series is such a friggin treat already. I cannot wait to see what happens next!

Pretty darn sweet OP! This is all we got to see at the end, but I think it really did show us everything about the series without spoiling anything. We got to see who the masters are, and possibly the servants. The animation was amazing, as expected of Ufotable. Finally, the song itself, sung by LISA was pretty darn awesome. While note as memorable as the Fate/Stay Night OP theme, its still pretty darn awesome. Very very nice!

Seems like we’ll get some seriously cool interaction between the newly summoned servants and their masters. See you next week!