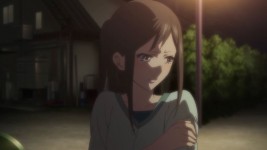 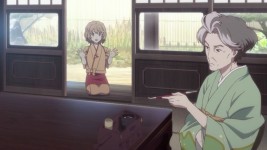 I originally thought that this week’s episode would be the finale, so imagine my surprise to find out that it wasn’t!  In retrospect, it makes sense since there’s still a lot to deal with in terms of Ohana’s relationship with the staff at Kissuiso as well as the state of the inn itself.  The episode starts off with Ohana working alongside Yuina to help prepare for the festival, though she doesn’t seem very excited about it.  Yuina is chatting happily with Ohana and pauses to ask if Ohana has made her wish plaque yet.  When Ohana says no, Yuina tells her that she better figure out what she wants to wish for soon since the wishes usually come true.  This causes Ohana to think about what she originally wished for when she arrived in Yunosagi; she wanted to shine for once, but now she’s unsure of what she wants.  Yuina suddenly hands Ohana a bag of wishing plaques and tells her that they’re for everyone at the Kissuiso and that she should get them to write down their wishes soon, since the festival is only a couple days away.  While Ohana is helping out with the festival, the rest of the staff is in the staff room, going over what they’ll do in terms of service.  It’s decided that breakfast will be served buffet style instead of whenever the guests want them, to minimize strain on the kitchen staff.  Though Ren doesn’t seem too thrilled with the idea, he comes to the conclusion that they’ll make the same food as always, it’ll just be served in a different format.  Tomoe decides that instead of assigning certain rooms to each waitress, they’ll all help each other out with the rooms.  Ohana’s grandma then enters the room and angrily states that Enishi continued taking reservations, but instead of backing down like I thought he would, Enishi stands up for himself and the staff, saying that he won’t lose to her.  Ren, Tohru, Tomoe and Takako all validate their decisions and Ohana’s grandma sighs before telling them they can do whatever they want, so long as their service to the customers isn’t downgraded in an attempt to keep up.

As everyone leaves the room to start preparing for the next day, we see Ohana standing in the hallway, having just gotten back from the festival preparations.  She has the bag of wish plaques in hand and tries to ask them to grab one so they can write their wishes down, but everyone blows her off, saying that they’re too busy to do it.  Ohana seems rather down after everyone leaves and is surprised when Denroku takes one of the plaques.  Outside, Ohana asks Denroku what’s wrong with everyone, because they all seem like they’re in a battle with her grandmother.  At that moment, Minko walks outside to take care of the trash and Ohana tries to get her to take a wish plaque, but Minko just snaps at her.  She shouts at Ohana, saying that she can’t believe that she’s siding with the manager and that Ohana doesn’t care because she has somewhere to go.  Minko starts crying, saying that she doesn’t have anywhere to go and that Kissuiso is her home, whether it closes or not.  After that, she storms off, leaving Ohana and Denroku alone.  Ohana starts to cry and Denroku calmly tells her that they’re all good people at heart, but sometimes they have a way to get side-tracked by things.  While Ohana cries, we see Tohru standing on the other side of the building, listening in on what happened.  After calming down, Ohana heads to bed only to find that Nako is sleeping over.  She seems excited about the idea until Minko arrives and tells Nako to go to sleep since their day will be starting at 4am.  Ohana reluctantly goes to bed, but thinks about how much the inn has changed and how much she doesn’t like it. 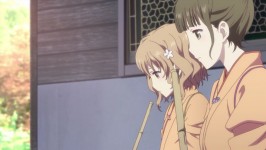 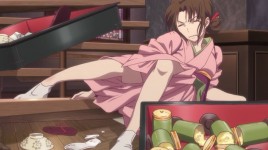 The next morning, Ohana is going for a walk to clear her head when Tohru passes her on his bike.  He stops and shouts at her, telling her that there’s no time for her to be taking a walk and that she should be helping out at the inn.  When she doesn’t respond, he shakes his head, saying that he’s surprised that she’s siding with her grandmother.  Ohana says that she’s not siding with her grandmother, but when Tohru asks her what she’s doing, she isn’t sure how to respond.  Sighing, Tohru said that he used to like how excited she got over stuff and how determined she was, but she’s changed and he doesn’t like it.  He then rides off, leaving Ohana stunned at what he said.  Later, everyone is running around, getting ready for the breakfast buffet and Ohana seems to be left in the dust a bit as Tomoe and Nako speed through their chores.  At breakfast, Ohana watches as everyone eats and compliments the food, but she feels depressed that things have changed this much.  An elderly couple approaches her and asks if breakfast is only served as a buffet now.  When she says yes, the man seems a bit down and says that he liked how before they were able to take their time, but his wife scolds him, saying that a buffet can be just as adventurous.  A little while later, Ohana and Nako are chatting as they sweep and Nako forces Ohana to tell her what’s going through the manager’s head.  After Ohana tells her, Nako says that it’s not fair for the manager to think like that because sometimes you can take other people’s dreams and make them your own.  As the two of them are talking, we see Ohana’s grandmother overhearing the conversation through the open window.  Later, Ohana asks her grandmother for permission for a room for Ko, but her grandma says that he can stay in her personal room.  Ohana is worried that she’s sick again, but her grandma flicks her in the forehead and says that a friend of Ohana’s is always welcome, which overjoys Ohana.  As Ohana makes her way around the inn to finish her morning tasks before school, she sees Enishi hanging some paintings along the stairway.  He says that he’s renting them from a gallery since it will brighten up the place and also make both the inn and the artists more money.  Ohana seems less than enthusiastic about it, but ignores him and gets ready for school.

At school, Minko keeps nodding off and when Ohana approaches her to make sure she’s okay, Minko ignores her and storms out.  Distraught, Ohana talks to Yuina, who simply tells her that Minko is sulking because she likes Ohana, but doesn’t like the fact that she’s siding with her grandmother instead of the rest of the staff.  Ohana seems annoyed that everyone is saying she’s siding with her grandmother when she’s not.  After school and helping out with the festival preparations, Ohana and Yuina are heading home when Yuina asks Ohana if the staff at the Kissuiso has written their wishes down.  Ohana says no and explains that they’re all too busy, so Yuina declares that she’s going to head to the Kissuiso herself and get them for the festival committee.  However, as she enters the inn, we hear a scream and see that Tomoe has fallen down the stairs.  It turns out that she’s sprained her ankle and can’t do her normal duties.  Everyone is panicking about it and Takako suggests calling the union for help, but Yuina says that even her family’s inn couldn’t get help from the union on such short notice.  As luck would have it, Ohana’s mom enters and volunteers her services for helping out.  Of course, Enishi starts shouting at her, saying that they don’t need her help, but Takako slaps him and tells him to stop letting his emotions get the better of him.  Nako then decides to tell everyone to stop fighting and to bring the Kissuiso she loves back instead of trying to change it all the time.  Ohana’s grandmother then enters the room and offers her help as well and things seem to finally start moving efficiently.  Tomoe is stubborn and continues to help with the cleaning and everyone is happy that things seem to be going so well.  Ohana sees her grandma sitting on the stairs and worries that she’s about to collapse again, but her grandma says that she’s fine and that customers will always come before themselves.  She smiles and stands up, saying that she’s always enjoyed that kind of work and continues on with her tasks.  Once everything is complete, everyone is congratulating one another on a job well done when Ohana’s grandma comes in and tells them that it’s time to go to the festival.  Everyone seems excited and Ohana is overjoyed to finally see the lights of the festival. 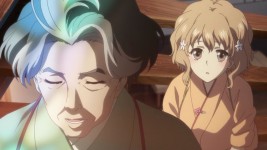 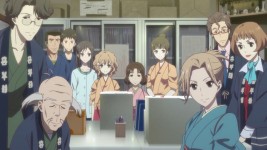 Opinions:  A lot happened this week and it’s only making me more excited for the finale!  Seeing Ohana, her mother and her grandmother all working together at the inn was sweet and I bet Ohana was overjoyed.  However, Tomoe’s fall looked painful and while I’m sad she isn’t able to help more, it’s actually brought the whole staff closer together.  I wanted to slap Minko for taking out her anger on Ohana, but at the same time I can almost understand why she’s so frustrated.  I probably would be too if I didn’t have anywhere to go if wherever I was working/living closed down.  Nako’s speech about making someone else’s dream your own was touching and it was nice to see her finally speak her mind in front of everyone.  I’m definitely looking forward to see how this series plans on ending, especially with so much going on right now!  At the very least, I want to see Ohana confess to Ko.  That’s really all I want in the end.