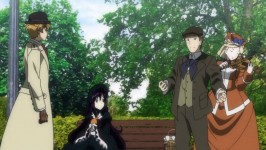 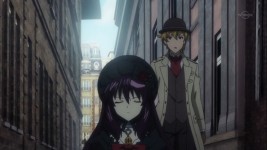 After last week’s adventures that took place inside of a book – literally – I was expecting anything to happen.  I definitely wasn’t expecting the series of events in this episode to take place, but it was one of the best episodes to date and an emotional one at that.  The episode starts off with a young woman waking up to a young man in her bedroom, playing the piano.  He tells her to get dressed because they’re going to have breakfast and then take a walk through the park to look at the flowers.  She calmly – almost robotically – asks him why they’re going to the park and he says there’s no real reason other than he wants to.  She stares at him blankly before agreeing.  Fast forward what I’m sure is a few hours and we see Dalian and Huey in the park, and Dalian is wincing at Huey’s horrific violin playing.  She finally screeches at him, telling him he’s horrible and that she wasn’t aware that a violin should be a torture device.  Huey gives her a stern look before looking at his violin, wondering why it wasn’t working properly.  As luck would have it, the young man and woman from earlier happen to be walking past them and the young man asks if he can take a look at Huey’s violin.  Huey agrees and the young man takes one look at it and says that one of the parts inside that helps create the sound is misaligned.  He then takes out a small tool and wiggles it around inside the violin for a moment – much to Huey’s horror – before saying that the repair is complete.  He then hands the violin to his companion to test it out; she stares at it for a moment before saying that she understands and begins playing a beautifully intricate piece.

As she plays, a crowd gathers and they begin murmuring that she looks like Christabel, a young prodigy.  Huey notices this and asks the young man if she’s famous, which startles the man.  He peers around, and noticing the large group forming, he tells his companion that they need to leave.  She blatantly refuses, saying that she’s in the middle of a song and cannot stop.  The man asks Huey if it would be alright if he borrows the violin for a bit and Huey agrees.  They finally introduce themselves and we find out that the man’s name is Dallaglio Hayward; Dallaglio promises to tune the violin for Huey and return it as soon as possible before grabbing Christabel’s hand and dragging her off.  Later, Huey and Dalian visit their favorite place; the bookstore!  Huey and the shopkeep are chatting while Dalian reads through several books, pausing to insult the shopkeep when he interrupts her reading.  Finally, Huey notices a picture of a young woman sitting behind the counter and asks the shopkeep who the woman in the picture is.  The older man teases him about her and Huey says that she just looks like someone he’s seen before (the old man snorts and teases him about the oldest excuse in the book).  Turns out, it was the girl he saw earlier and that Christabel is the only person in the world who can play the lost sonata’s by Guillermo Baldini, Utopia and Twilight.  Huey asks if anyone has ever played them before and Dalian interjects, saying that it’s impossible for a mortal to play the sonatas.  Plus, no one should ever play them because they have the power to either make you feel as happy as you would from taking narcotics or incredibly depressed and distraught.  She becomes worried when the shopkeep shows them that a new theater has opened up, specifically to have Christabel play there.  Dalian then tells Huey to prepare the car, because they’re heading to London. 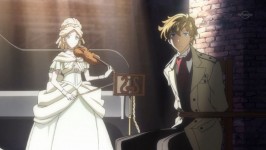 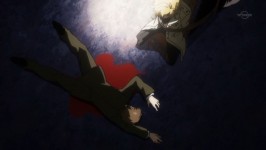 Once in London, Dalian gets apprehended by a police officer for trying to sneak into the theater without a ticket.  Huey apologizes for the trouble and tells the officer that he’s only there to retrieve a violin that he lent Christabel.  The officer lets Dalian go, but informs Huey that the large line outside is for Christabel’s performance and that he’s been instructed not to let anyone inside the theater before showtime.  Huey understands and thanks the officer for his help and walks away, Dalian in tow.  Dalian protests about Huey’s lack of determination and then demands to know why he’s taking her down a dirty alley.  Huey tells her to be quiet before saying that he saw a familiar face head down that way.  Turns out, he’s following Dallaglio, who is sneaking into the back of the theater to see Christabel.  The duo follow Dallaglio but are knocked unconscious by someone standing just inside the room.  When Huey comes to, both he and Dalian are tied to a pillar and Dalian is gagged – likely because their captor got tired of listening to her tirade.  In the corner, he sees a piano with what looks like a machine or doll attached and then he notices Christabel standing beside him.  He asks her where they are, but she simply greets him and says that she wants to play him something.  As she starts to play, Dallaglio appears and stops her performance just before the director of the theater appears.  Dallaglio demands to know why he captured Huey and Dalian and the director laughs, saying that it isn’t any of his concern.  Dallaglio attempts to plead with the man, but he continues to laugh, saying that it’s all Dallaglio’s fault for making Christabel in the first place.

Turns out, Christabel is actually a puppet of sorts, but actually has a soul.  Dallaglio assisted the director in creating the one “human” who could perform Baldini’s lost sonatas and now that she was made and could perform, he had no use for Dallaglio anymore.  He shoots the poor guy before leaving them alone, saying that he’s heading to his sound proof room for the performance.  Apparently if you hear Utopia, then you’ll essentially become a slave and the man’s whole objective is to dominate the world using Christabel’s music.  After he leaves, Dallaglio manages to get up and cut Huey and Dalian loose, all while telling them why he made Christabel.  He originally intended to make her to return the honor to his father’s name, but he ended up realizing that Christabel had a soul and free will.  I think he eventually fell in love with her, which is why he didn’t want her to perform anymore.  Dallaglio eventually dies from blood loss and Christabel asks Huey what’s wrong with him.  Dalian explains that he’s broken and no one can fix him.  Christabel doesn’t even change her attitude but instead obeys the order of the director to start the performance.  As she starts, she then makes a warning of sorts through her music and begins playing Twilight instead of Utopia.  The building begins to crumble and everyone – including Huey and Dalian – manage to escape the theater.  Everyone except for the director and his gang, since they were in a sound proof room the whole time.  Of course, Dalian is more upset about losing the Phantom Sonata than almost dying.  After the credits, we see young Huey in the Bibliotheca asks the girl in white where she would want to go on an airplane.  In the midst of his rambling, she tells him that she can’t leave and is destined to be alone forever.  Huey becomes upset by this and says that he’ll never leave her alone.  He then starts to disappear, probably because the Bibliotheca is closing, and the girl says goodbye to her only light (which would be Huey) and looks rather sad when he’s finally gone. 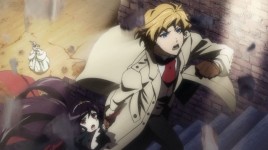 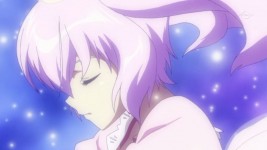 Opinions:  This is probably one of my favorite episodes to date.  I love orchestras (I actually used to play the violin when I was younger) so I loved the sonatas that were in this episode.  The fact that Christabel was able to develop feelings for Dalliaglio despite being a doll was touching and the whole story had a rather bittersweet romantic air about it.  The director was a total ass and the foreshadowing of him being in a sound proof room and unable to hear Christabel’s warning was well done and I’m glad he met the ending that he had.  He definitely deserved it.  The scene with young Huey was sad, since I want to say that’s the last time he was able to enter the Bibliotheca until he met Dalian.  I still want to know why he was able to enter it in the first place though.  Will I ever get my questions answered?