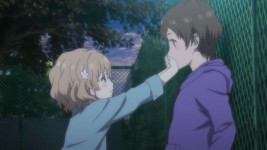 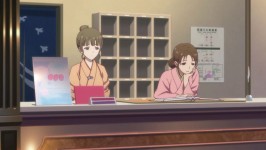 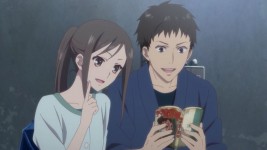 After everything that happened last week, I wasn’t entirely sure what to expect this week.  But it appears that P.A. Works is holding nothing back with the series winding down to the finale, so anything is possible!  As a quick recap from last week, Ohana’s grandmother is planning on closing the inn after the Bonbori festival and everyone is devastated, especially Ohana.  Ohana traveled with her new aunt to Tokyo to talk to her mother about living arrangements for when the inn closes while Takako finds the producer who stole all that money from them and manages to capture him and take him to the police.  This episode picks up where we left off, with Ohana and Ko somehow managing to run into each other on a foot bridge.  Ko calls out to her and Ohana turns to run, but Ko manages to run up to her and grab her shoulders before she’s able to bolt.  He asks her what she’s doing in Tokyo and she starts crying, which freaks Ko out.  What I’m guessing is some time later, we see Ohana and Ko sitting at the park, Ohana drinking/eating that same corn soup drink thing she had in the very beginning of the series.  She jokingly asks Ko if he still fills the can with water before dumping it into a bowl and using chopsticks to get to the rest of kernels, but Ko says he doesn’t do that anymore.  Ohana can only listen wide-eyed as Ko tells her how he never thought Tokyo’s skyline was boring because she was always there with him.  He admits that once she left to work at the inn, he found Tokyo to be boring, just like she did before she left.  Ohana suddenly screams and pushes him against a fence, covering his mouth and saying that she doesn’t want to hear him say those things because she has something she wants to say too.  After a few moments of stuttering, she finally manages to ask him to attend the Bonbori festival with her, which he agrees to.  After the two talk some more, Ohana receives a phone call from Takako and she agrees to meet her aunt back at the train station.  Ko sees Ohana off and then unexpectedly shouts out in glee, scaring the people standing nearby.

While everything is going on in Tokyo, we find out that the Kissuiso has been put on the front page of the annual review magazines for hot spring resorts and hotels.  Because of this, the inn suddenly has a huge influx of people wanting to stay there during the bonbori festival and they’re quickly booked solid for several of the days during said festival.  Ohana’s grandma comes in and sees what all the commotion is about, but instead of being happy about it, she instead tells Enishi and Tomoe not to take any more reservations for the festival.  She then asks to see them all in the staff room, where she talks to them about closing the inn down.  Everyone is trying to convince her that the article is exactly what they needed to be able to get the wind back in their sails so to speak, but she ignores them.  She then turns to Ren and tells him that she knows he’s accepted a position elsewhere, along with Tohru and that another inn is scouting Tomoe.  All three of them say that they’ll turn down the positions, but Ohana’s grandma tells them no, because she wouldn’t have them shame their new managers.  With that being said, she tells them to return to their job and reminds them not to accept anymore reservations.  A little while later, we see Tohru and Minko in the kitchen and Minko is devastated by the turn of events.  In fact, she ends up breaking a plate and starts crying with Tohru admits that he won’t be able to bring her with him when he starts his new job.  To cheer her up, he shouts something from an old manga he used to read, and it turns out Minko has read it too.  So the two take a break after cleaning up the broken plate, and bond over their love for the manga Teppei.  As it would turn out, this manga is what inspired both of them to be a chef (now I know why Minko didn’t want to say what inspired her during the cultural festival) and Jiro approaches them, saying that it’s one of his favorite works.  The two stare at him blankly until he bluntly tells them that he’s the author and illustrator for Teppei, which blows both chef’s minds. 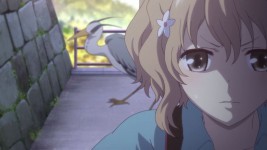 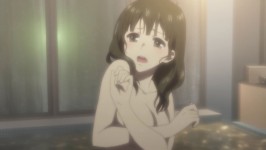 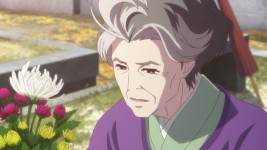 When Ohana finally returns to Kissuiso, she’s too involved in her thoughts about what she can do to save the inn that she’s shocked when she sees that everyone is running around like a chicken with their heads cut off.  Tomoe calls out to her and asks her to start answering phones, but Nako reminds Tomoe that Ohana’s grandma wanted someone to head into town to help with the festival’s preparations.  Enishi waves off Nako’s concerns, saying that they’re way too busy to be helping with that and continues to take reservations, despite Ohana’s grandma telling them explicitly not to.  Later that night, Minko, Ohana and Nako are all in the bath, wondering how to convince Ohana’s grandma not to close down the inn.  Nako suddenly becomes angry and declares that she’s going to have to have a word with her, saying that there’s no other way to convince her.  As if on cue, Ohana’s grandma walks through the door, which freaks Nako out and the girls hurry to the other side of the bath.  All three of them are amazed at how quickly Ohana’s grandma bathes and how the room is cleaner when she left than it was when she entered.  Ohana stands up, declaring that she’ll be the one to talk to her grandma, but when she finally makes it to the changing room (probably a minute or so after her grandma left the room) and is shocked to find her already fully dressed and heading out the door.  Before Ohana can say anything, her grandma tells her that she needs her to accompany her somewhere the following day.  Unsure of what to do, Ohana just watches as she leaves.

The next day, Ohana accompanies her grandma to the family grave where they spend the day cleaning off everything.  Ohana’s grandma confesses that her late husband would be appalled to see how things turned out at the inn, but Ohana just becomes angry about it.  She then tells her that the inn needs to stay open because not only did they get a good review finally, but it’s everyone’s home.  And more importantly, it’s her home.  Her grandmother says something, but as she stands up, she faints and Ohana panics.  We see them some time later at what I’m sure is the shrine and Ohana’s grandma is resting.  While she’s resting, she tells Ohana that she feels bad for letting her children take a backseat to her happiness and she doesn’t want to repeat that mistake.  She continues on, saying that Enishi was never really cut out for running an inn in the first place and that she had seriously considered closing down the inn when Ohana’s mom left and refused to inherit it.  Ohana asks her how old she is, saying that she thought that she couldn’t understand her because old people ramble.  For the first time in the series, we see Ohana’s grandma laugh, which is both endearing and creepy at the same time.  Eventually, Ohana and her grandma return to the Kissuiso only to find the other inn owners standing there, demanding that they send someone to help with the festival.  Enishi is about to tell them no when Ohana’s grandma says that she needs someone to go.  When no one volunteers, Ohana says that she’ll go, but everyone else seems incredibly angry that she’s supporting her grandma.  As she heads out, she looks back and as the doors close, she seems to realize that she may have just lost everything. 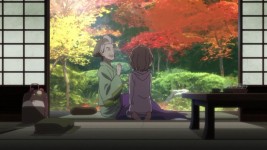 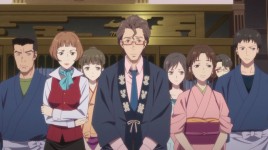 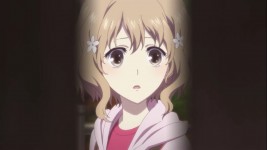 Opinions:  Like I said before, they really weren’t holding anything back with the finale.  I’m excited to see what will happen between Ohana and Ko after the festival, but I’m also dreading to find out what will happen between Ohana and the rest of the staff at Kissuiso.  Seeing Ohana’s grandma laugh and really wear her heart on her sleeve this episode was a nice touch, since she’s almost always seemed like the stern, angry old woman.  It’s nice to know that she really does worry about her family and feels guilty about forcing her children to take on a burden that they shouldn’t have.  The whole stand off between the staff and Ohana (and her grandmother) reeks of a coup d’état, so I’m definitely intrigued to see how that will work itself out.  Whether Ohana really has lost everything – in terms of a home and friends – remains to be seen, but I’m sure it will be an intense moment when it’s addressed.  Overall, this was a great set-up for the finale and now I’m more eager than ever to see how the series will end, even though it will also be sad to see it end.  If that makes any sense.