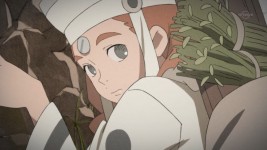 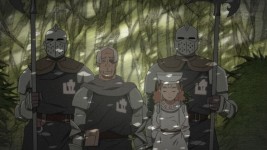 This week’s episode was…different.  At first I wasn’t exactly sure what was going on or why the animation style changed (though I loved the new style) but everything came together towards the end of the episode, resulting in a satisfactory episode.  When the episode kicks off, the first thing that you notice is that instead of the shiny, rather detailed animation we’ve become accustomed to over the last 8 weeks is rather gritty with an appealing unpolished look, reminiscent of Gainax’s work on the early parts of the Gurren Lagann series.  The animation aside, what really struck me as confusing was the fact that Huey and Dalian find themselves on a cliff overlooking what appears to be a crumbling military base.  Huey asks Dalian if she knows what’s going on, Dalian simply says that the world is crumbling beneath their feet.  Fast forward a bit, and we see a young woman named Ira who lives with her grandmother, training to become a shaman.  Her grandmother is busy making a potion or something of that ilk when she hollers for Ira to come see her, but realizes that Ira has already gone into town.  She shakes her head, saying that her granddaughter is too absent minded and gets distracted too easily before going back to her work.  As if on cue, we see Ira – who is busy climbing a cliff – look over her shoulder, as if she could sense her grandmother talking about her before shrugging it off and continuing her climb to reach two pretty blue flowers.  Once she nabs them, she happily skips into town, eager to see someone named Tito but first makes a stop at an old man’s house/store.  Here, she gives him the remedies he requested as well as a few herbs for his cold because she doesn’t want the baby he’s caring for to catch it.  The man notices the flowers and teases her a bit about them, saying that he hasn’t seen Tito yet, but his caravan is coming into town that evening.  Ira becomes flustered, but can’t get too angry at him because she’s distracted by seeing two strangers in town and comments on their weird clothing.

After leaving the elderly man, Ira starts making her way home, stopping real quickly to give a soldier some herbs for his wife’s illness, when her uncle appears.  Apparently he’s a captain of the guard or army or whatever it is they have there and he’s demanding that Ira allow him to speak to her grandmother.  Ira reluctantly leads him to her house, likely because they’re “escorting” her there with their weapons drawn, and she reminds her uncle that her grandmother hates people in armor.  Her uncle tells her that he’s aware of that, but he doesn’t have a choice because of the Baziumu and they don’t have any other choice.  Ira doesn’t seem to like this at all and takes off, managing to lose the soldiers in the forest.  Of course, they manage to find Ira’s house and her grandmother tells them to leave because they’re defiling sacred land and breaking protocol.  Ira’s uncle pleads with her, asking that she make them elegans (a type of poison/flame potion) that could be used to kill the Bazuimu.  At first, Ira’s grandmother refuses but after hearing about the fortress being brought down by the bugs and that survivors said that neither swords, ammunition or fire can defeat them, she relents.  She tells Ira’s uncle to return the following day and she’ll have it ready for them.  Once the soldiers leave, Ira’s grandmother asks her to venture into the heart of the forest and find the tree that has vines for branches and white blossoms.  She then instructs her to bring back a full bag of the trees leaves, but to be sure to wear two pairs of gloves and burn said gloves after she is done retrieving the leaves.  Without another word, Ira sets off into the forest since the tree is impossible to find when the sun sets. 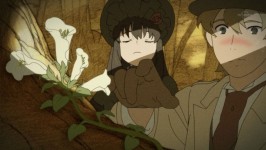 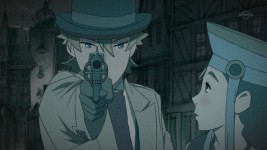 Ira sprints through the woods and pauses at a stream to get a drink of water when she hears some rustling in the bushes.  Startled, she gets ready to run when Dalian and Huey appear, telling her that the boar was scared off and she’s safe.  Just as Ira is about to ask them who they are, she notices that she found the very tree she was looking for in the first place.  As she collects the leaves, she talks to Dalian and Huey, though it’s more of answering their questions.  Dalian asks Ira if she’s a shaman and Ira tells her that she’s still just a shaman in training and that she’ll never be as good as her grandmother.  Huey reaches out to touch a leaf and Dalian simply informs him that the leaves contain an incredibly strong toxin that can kill someone just by touching it, which makes Huey back away from the tree completely.  Huey then asks Ira if she’s seen a lot of books, perhaps in a library, and Ira tells him that the only place there would be a lot of books would be at the new printing shop in town behind the old man’s shop she was at earlier.  When the duo gives her a blank look, she tells them it would be the next street over from the street they were on earlier that morning.  Dalian then flies into a rage, belittling Huey for leading them into the forest when she knew it was in town.  Huey apologizes for Dalian’s behavior (she was also calling Ira “eyebrows” for the extent of their conversation, which offended Ira) and the two run off.  Ira watches them before remembering that she needs to head back to her home to prepare the elegans.  Later that night, the preparations are complete and Ira’s grandmother gives her a small flask of the elegans before telling her to give it to Tito, since he’s more likely to be attacked since he’s a traveler.  Ira is shocked by this and her grandmother calmly states that she knows Ira has feelings for Tito and tells her to hurry.  Ira nods and quickly takes off towards the town.

As Ira approaches the town, she’s relieved to see that it’s still in tact, but that relief is short lived because as soon as she reaches the top of the hill overlooking the town, explosions start occurring.  She rushes into the town, only to find no one there and she starts to worry about whether everyone is safe or not.  As she makes her way around town, she trips and falls, nearly smashing the flask she’s carrying.  She finds the old man’s shop and is about to enter it to make sure no one is trapped inside when one of the bazuimu attacks, blocking the entrance to the store.  In reality, it looks like a giant praying mantis with wings and Ira remembers her grandmother’s instructions to throw the elegan at the insects if she’s attacked.  Once she does so, the insect is engulfed in flames but manages to put them out to Ira’s horror.  Remembering Dalian’s advice to run, she turns and runs, but trips and would have fallen if Huey hadn’t been there to catch her.  Ira is shocked to see him and even more shocked when he manages to destroy the bazuimu.  Once it’s defeated, Dalian finds a broken cart of books and murmurs something about that’s what the insects are looking for.  Confused, Ira asks Huey what’s going on and he smiles, telling her that the townsfolk are safe and tells her where she can find them.  Not long after, we see Ira rejoining the townsfolk and Tito, but is horrified to see her uncle holding his sword to her grandmother’s throat.  He’s blaming her for not giving them the elegans in time to defend the city, but Ira shouts at him, telling him that they have no effect on them anyway.  Huey and Dalian reappear and mention something about the books being bait and how they have a good amount of bait there because of Tito’s caravan.  Of course, Ira’s uncle blames Tito for everything, but nothing happens since at that moment the insects attack.  Huey opens the gate to the Bibliotheca and begins reading a book, which destroys all of the insects while Ira and her grandmother watch on in awe.  After the bugs are defeated, Ira begs them to teach her more about the Phantom Books, but Dalian says they can’t since they’re from another world.  Before they leave, Dalian promises to visit again and even tells Ira that she’ll be the greatest shaman the town has ever seen.

Once back to the “real world”, we return to the normal animation and find out that the bugs attacking the city was actually bookworms that were literally attacking the book itself.  Turns out, there’s a huge storm and because the house is so old and leaky, the bookworms decided to invade the library and start munching on the books.  Huey is busy bringing the books upstairs and out of the damp room while Dalian rants and raves about the horrors of her books being destroyed.  Once he leaves the room, she opens the book she just saved and smiles slightly at the picture of Ira and Tito all grown up. 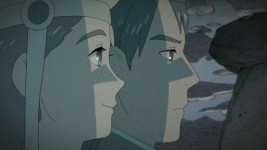 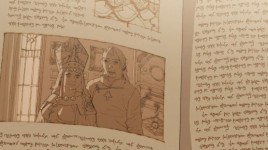 Opinions:  This was definitely an interesting episode, thought I wasn’t aware of what was going on at first.  Despite the filler-esque feel of the episode, the story was solid and I loved the animation they used for it.  It was very soft with minimal details, which was a stark contrast from the animation we’re used to with this show, but I thought it looked and felt more like a watercolor painting than animation.  It also really reminded me of the early animation for Gurren Lagann, which I love (and of course, it made me want to re-watch the series).  I would have liked to see more Dalian and Huey, but I did enjoy the story of Ira becoming the greatest shaman and her romance with Tito.  Even though I liked the episode, it did feel like a filler since they kind of ignored the whole thing with Han and Flamberge and the yomihime they’re searching for.  I’m starting to wonder if we’ll ever find out about them or if we’ll always be left in the dark.