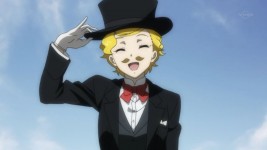 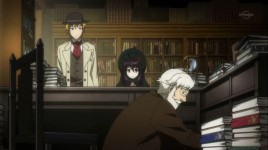 This week was definitely interesting, though it was also a bit uneventful.  As we’ve seen before, the episode seems to be split into two separate plots, but GAINAX somehow managed to meld the two plot-lines into one seamless episode.  The first plot-line starts off with a suited figure approaching Huey’s home and ringing the doorbell.  When Huey answers the door, he’s shocked to see Camille standing there in a man’s suit, top hat and fake mustache.  Of course, Camille sees nothing wrong with her outfit, but she’s subjected to intense criticism from Dalian (as usual).  Camille scolds Dalian and tells her that’s no way to treat someone who brought her presents.  Dalian perks up when Camille pulls out a box of sweet buns and then demands that Huey make some tea.  Shaking his head, but still smiling, Huey heads to the kitchen to make some tea.  Upon his return, Dalian is happily munching away on a bun when Camille tells her that she has another present for her, but is distracted by an auction catalog that Dalian has been reading.  Huey informs her that they picked it up from a used book store, but he doesn’t see the point in reading about an auction that has already happened.  Before Dalian can say anything, Camille points at a certain teddy bear that was up for auction and says that it’s cute.  Dalian corrects her, saying that it’s the most symmetrical, perfect, most adorable bear ever created, but stops short of saying that it’s adorable.  Camille teases her about it until Huey asks her about the other present she said that she had.  Camille is confused for a moment before saying that she forgot it at home and excuses herself from Huey and Dalian’s company.

Later that day, Dalian and Huey venture into town to the used bookstore because they received a message saying that the owner had a Phantom Book he wanted Dalian to take a look at.  The store owner rummages around for a bit before regretfully telling Dalian and Huey that he must have accidentally sold the book to someone.  Dalian is furious with him, calling him a stupid old fool, but Huey calmly asks him what the name of the book was and if he remembers who he sold it to.  The store keeper says that it was the Book of Equivalence and that he vaguely remembered a young girl with short blond hair and a mustache who had purchased it.  Dalian and Huey know exactly who he’s talking about, but Dalian tells Huey to hurry since they need to find the book right away.  First stop is Camille’s estate, where they find that she stopped home to change her clothes before taking off again.  Her butler does tell them that she asked him for his pocketwatch, which he didn’t mind giving away because it was broken and Camille’s father had recently given him a new one.  And so, the quest continues.  We see Dalian and Huey traveling across town and back, following the trail that Camille has left in her wake.  Eventually, Huey asks Dalian why she’s so intent on finding the book since it looks like it only helps in bartering.  Dalian informs him that the book will allow you to barter for whatever you want the most, and in some cases, you’re willing to sell your life to get whatever that item may be.  Huey nods, realizing that the book can actually cause a bit of trouble despite it being a fairly innocent book.  Eventually, they find out that Camille went to a baron’s home and Huey groans, saying that he’s heard nothing but bad things about the baron and his collecting.  As the two head toward’s the man’s home, we see Camille sitting down to talk with the collector and asking him to trade her for the bear that Dalian was looking at in the auction catalog.  The man informs Camille that the bear is worth more than his life and taunts her with what she’s come to barter with.  Later, Huey and Dalian arrive at the man’s home, only to find Camille exiting the house and seeming to be in tact.  She hands Dalian the bear and reveals that she traded him the Book of Equivalence for the bear.  Dalian calls her an idiot, but it seems like no real harm has happened, so the trio leaves and heads back to Huey’s house. 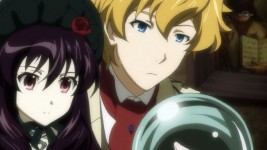 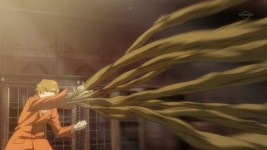 The second plot-line seems to pick up instantly where we left off, though it has a bit more action in it (though still not much).  Later that same evening, Huey, Dalian and Camille are chatting in the study when someone starts pounding on Huey’s front door.  Upon answering it, Armand tumbles through the door and begs Huey for his help.  Before Huey can do or say anything, weird branches or vines coil around Armand’s hand and rocket across the room, setting themselves ablaze.  It seems as though Huey was able to get the situation under control since the next thing we see is Armand sitting in the study, looking rather sorry for himself.  Huey asks him what happened and Armand reveals that he found the Book of Connection and that something strange has happened.  Dalian informs both Huey and Camille – who looks rather confused about the whole thing – that the Book of Connection is actually in two halves and when the two halves are brought together, it’s supposed to mean that the two people holding the books are going to have a long, happy relationship together.  Armand nods, saying that was what he thought was going to happen, but he was wrong.  Turns out, he sent one of his servants to find whoever had the other half of the book and he met a girl named Lianna.  The first day that they met, Lianna proposed to Armand and he accepted, which shocks Huey.  Camille chimes in, asking him what’s wrong with the woman proposing and Huey says that there’s nothing wrong with it.  Before they can argue, Dalian urges Armand to continue with his story.

Armand goes on to tell them that since they needed to discuss their engagement with their families, they couldn’t get married right away, but every day after that seemed to be perfect.  Here, we see a short montage of moments between Lianna and Armand and they really did seem like they were in love.  However, Armand tells them that their happiness wasn’t fated to last and Dalian instantly accuses him of cheating on her.  When Armand hastily denies it, she informs him that the Book of Connection was created by witchcraft of a Greek Goddess who was known for being jealous of her lover.  When her lover attempted to marry another, she encased him in vines and set him ablaze, which appears to be happening to Armand.  Armand tells them what happened and it turns out, he only helped another woman who had fallen to her feet, which had caused Lianna to become insanely jealous.  Things started snow-balling and when Lianna caught him chatting with one of her servants, she flipped shits and tried to kill him, which is when he ran to Huey’s home.  Just then, someone knocked at the door and when Huey answers it, it turned out that Lianna is standing there, asking to speak with Armand.  When she enters the room, Armand jumps to his feet and tries to hide from her, but it’s to no avail.  Lianna notices Camille and Dalian in the room and accuses Armand of cheating on him before shouting at him, which caused the vines encasing Armand to completely encase him and then suddenly start burning.  Huey, Camille and Dalian can only watch as Armand is burned alive and turned to ash.  When Armand is dead, Lianna hands the book to Dalian and leaves as if nothing had ever happened.  Huey opens the Bibliotheca and pulls out a book meant to resurrect the dead and Dalian says that as long as Armand isn’t stupid enough to eat anything in the underworld, he’ll be able to be brought back to the world of the living.  Luckily, Armand was able to be brought back, though he swears to not base his opinion on women just on their looks, but on their personality as well.  Somehow, I don’t believe him. 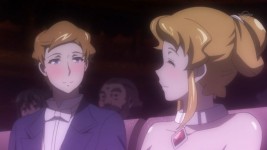 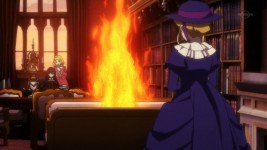 Opinions:  While this was a good episode, it was certainly lackluster compared to some of the other episodes.  The first plot-line was a tad boring and while it was intriguing to see a book like that, it also wasn’t the greatest storyline ever.  The second one was far more interesting and I’ll admit, I loved seeing Armand burned to death even if he was brought back to life afterwards.  Camille never ceases to amuse me and I’m surprised that Dalian wasn’t as cruel to her this week as she was in the past.  Perhaps Camille is growing on her?  All I can say is that I hope we get to see more of the yomihimes soon and learn more about the girl inside the Bibliotheca.