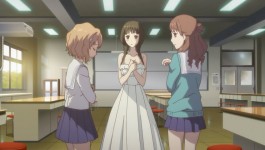 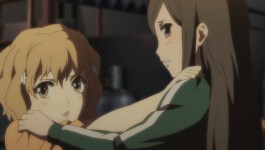 After all the shit that went down last week, I wasn’t exactly prepared – mentally and emotionally – for this week’s episode.  While I’m happy that things seemed to be worked out between the girls, the bombshell Ohana’s grandma drops on us at the end of the episode is just too much to take.  As a quick recap from last week’s episode, Enishi and Takako are getting married, though Ohana’s grandmother doesn’t intend to have Enishi take over the inn when she retires.  Minko is pissed at Ohana because Tohru likes Ohana and not her, which somehow means that Ohana should date Tohru even though it would break Minko’s heart (I’m just as confused as you are at this point).  Oh, and the whole inn is running themselves ragged trying to prepare for Enishi and Takako’s wedding.  This week’s episode starts off with Takako waking up Minko and Ohana at the crack of dawn, touting terrible Engrish sayings such as “the early bird catches the worm” and so on.  Ohana and Minko look at each other in confusion, but as soon as Ohana says something, Minko storms out of the room as per usual.  Takako then summons everyone to the staff room for a meeting and drags Tomoe – who had just arrived for work – into the room, telling everyone it’s time for them to get fired up about the preparations for the wedding.  Ohana wonders what caused Takako to become so enthusiastic about it since the day before she seemed less than thrilled with the idea.  Minko just looks sullen and keeps sending Tohru glances out of the corner of her eyes.  Fast forward a bit and the girls are at school, where Ohana is too busy trying to think of a way to make it up to Minko when her phone suddenly rings in the middle of class.  A lot of the class snickers when the teacher scolds her and she shamefully shuts off her phone until break.

It turns out, her mother called her and Ohana calls her back, scolding her for calling her while she’s in the middle of class.  Ohana’s mom laughs and says that she forgot Ohana was still in school which annoys Ohana and she asks why she bothered to call her.  Her mom mentions Enishi’s engagement and says that she sends her congratulations, though she won’t be able to attend the actual event (Ohana doesn’t seem too surprised about this).  Ohana then asks her mom about her boyfriends and why they never lasted very long; her mom simply says that she still has a one-sided crush on Ohana’s late father and while she thought her boyfriends might be able to fill that void, she’s come to terms with the fact that no one can replace Ohana’s father.  This embarrasses Ohana so much that she actually hangs up on her mom because she couldn’t deal with listening to her mom talk about being in love.  Taking a moment to calm down, Ohana realizes that she has a one-sided crush as well, though her crush is on Ko.  She mentally scolds herself for not realizing it sooner and decides to confess to Ko once the wedding is completed.  Later that day, Ohana, Nako and Yuina finish the wedding dress they were making Takako out of the curtains (okay, I was wrong.  I thought they were making table cloths) and while they’re happy with the result, they still have a few alterations to do.  Yuina suggests that Ohana put on the dress, but Ohana says that she can’t because she’s too short and the dress would drag on he ground, which would throw off the alterations.  Both girls look at Nako, who starts to panic, but somehow agrees to try on the dress.  Of course, her breasts are way too big and they can’t even zip up the dress!  Yuina and Ohana both have a sense of deja vu, though neither of them are too happy about that.  The girls decide that Minko would probably be the best person to try on the dress, but Ohana’s not sure how they’ll manage that since she’s still pissed at her. 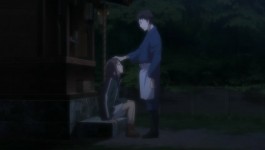 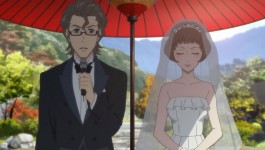 Later that night after everything is finished for the day, Tohru decides to start practicing for the wedding dinner.  Minko is standing in a corner and offers her help, but Tohru shuts her down and she runs out of the room on the verge of tears.  Ren calls after her, obviously aware that her feelings were hurt, but Tohru says that he’s decided to stop spoiling Minko.  Ren seems confused, so Tohru tells him that he’s noticed that you have to be hard on them when they’re in a slump since it’s the only way they can overcome it.  After getting her hopes dashed, Minko heads outside only to find Ohana and Nako standing beside the door with the wedding dress.  When she exits the doorway, they ask her if she would be willing to try on the dress and she instantly refuses because she hates wearing things with frills on it.  Nako chases after her, but Minko turns on her, slapping the dress out of her hands and shouting at her to shut up.  This pisses Ohana off and she lunges at Minko, saying that she doesn’t mind that she doesn’t like her, but that they all worked hard on the dress for Takako.  Minko tells her to shut up before mocking her, saying that Tohru has been working really hard as well but no one seems to appreciate it the way she does and that Ohana has stepped all over Tohru’s feelings for her.  Ohana informs Minko that she has a one-sided crush on Ko, which just pisses off Minko and she starts shoving Ohana.  The two start fighting, Minko saying that Ko is a loser compared to Tohru and that Tohru is perfect.  The fight stops when they notice Tohru standing there, overhearing everything.  Of course, Minko runs off to avoid confrontation and Tohru chases after her.

Tohru eventually finds Minko at the nearby shrine crying her eyes out.  He approaches her and when Minko makes another attempt to run away, Tohru barks at her, asking if she’s stupid.  This startles Minko enough that she doesn’t bolt and Tohru admits that he does have some feelings for Ohana, but it’s more of him getting excited by watching her and trying to figure out what crazy stunt she’s going to try pulling next.  He does say that he doesn’t intend to act on his feelings and that on the other hand, Minko keeps him in suspense because he never knows what she’s going to do next either.  This makes Minko cry because she’s happy that Tohru is willing to watch over her without even liking her.  Tohru smiles wryly and pats her head, saying that she really is stupid.  Meanwhile, Nako is telling Ohana that even though she’s never been in love before, she was deeply moved by what Ohana said about her crush on Ko.  It seems as though some time has passed since Minko shows up and says that Ohana’s stupid before agreeing to try on the dress so that they can finish the alterations.  Once in the dress, Nako and Ohana gush over how pretty Minko is and swept away in the moment, Nako dashes from the room, saying she’s going to get some flowers for Minko to hold.  With Nako gone, Ohana tries to apologize, but Minko interrupts her and says that she’s not giving up on Tohru and plans to be direct like Ohana is planning.  Ohana merely stares at Minko happily (with sparkles no less), which embarrasses Minko to the point where she runs out of the room and calls Ohana a balut.  Nako is confused since she just arrived with the flowers, but Ohana celebrates the fact that she’s back to being called balut instead of being told to die.  Since things seem to be going back to normal, preparations for the wedding are in full swing and Minko was even allowed to help Tohru with the wedding meal.  Ren joins them and asks Tohru to give him orders, since he’s in charge for the night.  Takako is pleased with how the banquet room was decorated and is thrilled with her dress.  Once everything is done, the wedding takes place and it’s a small, intimate wedding.  Of course, after the ceremony, the staff rushes back to their posts to prepare for the dinner.  Everything seems to be pulled off without a hitch and after their duties are completed, Tomoe hands everyone an invitation since they were all invited as well.  During their dinner, they watch one of Enishi’s friends sing them a song that she wrote for them as well as a very odd performance by Jiro (who plays Enishi) and Denroku (who plays Takako).  After the wedding, Ohana’s grandma calls everyone to her office for a meeting.  She announces that Denroku is retiring and would like to find someone to succeed the duty of his books detailing the logs of the inn over the last 40 years.  She continues on, saying that she’s considering sealing the Kissuiso along with the logs after the Bonbori festival that year, much to the shock and horror of everyone there. 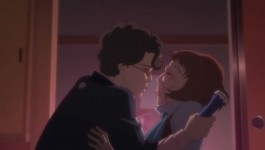 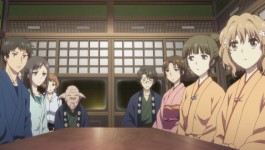 Opinions:  Overall, it wasn’t a super eventful episode, though I think it’s about time Tohru knew about Minko’s feelings for him.  I think he let her down gently and since he’s still willing to look over her, Minko was able to accept that he has feelings for Ohana.  Though I thought it was a good thing for her to be determined enough to not give up so easily.  The whole wedding thing was cute and I’m glad it went off without any problems, though Ohana’s grandmother’s announcement was definitely a shocker.  I hope she decides not to close down the inn because not only would everyone be out of a job, but Ohana has just found the one niche where she belongs!  Definitely looking forward to next week’s episode, since it looks like Ohana is traveling to Tokyo to see Ko again and I’m anxious to see if she’ll confess!