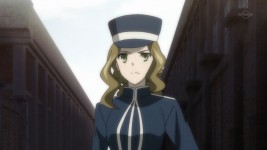 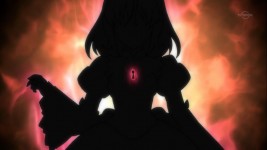 This week, instead of checking in on what shenanigans Dalian and Huey are up to, we get to meet two new characters.  Unfortunately, they don’t seem to have the same charisma or chemistry that Dalian and Huey have.  When we first see them they’re traveling down a road on a motorcycle with a car attached to it (a motorcycle car, not an actual car) and when they come to a fork in the road, the man hops off of the motorcycle and stares at the map with what appears to be frustration or confusion.  His companion, who appears to be another yomihime, mocks him for getting lost and he tells her to shut up before calling her a piece of trash.  When he remounts his motorcycle, we get a glimpse at what appears to be a staff of some sort mounted on the side of it.  The duo manages to find the town that they were looking for originally and the man – who we find out is named Han – seems to notice that everyone is too happy and that something may be amiss.  As they’re cruising around the town, they’re ordered to stop by a police woman named Mabel.  Han is incredibly cold to her, but I think that’s just his personality, and he tells her that they’re looking for a young woman who has a keyhole in her chest like his companion.  The girl doesn’t seem to know who he’s talking about and notices his staff, asking him if he’s a priest.  Han informs her that he’s a Libricide Officer and that it’s imperative that he find the girl he described to her.  Mabel says that she hasn’t seen her, so Han asks about roughly 80 people who have gone missing.  Mabel seems offended by the question and informs Han that since she’s taken over the police force during the war, there hasn’t been any disappearances or murders.  Seeing no reason to quarrel with her, Han asks where their gas station is.  Mabel reluctantly tells him that the next delivery of gasoline won’t be arriving for two days, so Han hops back on his bike and asks where the nearest inn is.  Instead of directing him, Mabel invites Han and his companion to stay with her since the inns seem to not be that great.

Han and his companion accept the invitation, but before they head to Mabel’s house, they head to the local pub so that Mabel can get some ingredients for dinner.  Mabel seems right at home at the pub and when she finally rejoins Han, he comments on how she’s really popular.  Mabel waves off the comment as something trivial and the trio begins heading towards Mabel’s home.  Han notices the prostitutes on the side of the road and asks about them.  Mabel laughs, saying that the old factory off in the distance was used to create ammunition during the war and where there’s men, prostitutes soon follow.  Some time later, the group arrives and Mabel’s house and Flamberge (the yomihime) makes a snarky remark about how Mabel must be loaded since she has a large house.  Mabel laughs and says that she never said anything about living alone.  When they enter the house, they’re greeted by Mabel’s grandparents and Mabel introduces them to the elderly couple but they’re distracted by a little girl shouting at Han and Flamberge, telling them to get out.  Mabel scolds her and then apologizes for her little sister’s attitude, but Han and Flamberge say it’s not necessary.  Mabel shows them to their room and Flamberge flops onto the bed (somehow, since she’s wearing a straightjacket and has chains around her ankles) and Han grabs his staff and his hat and heads out of the house.  As he leaves, the little girl named Penny pokes her head into Flamberge’s room, which makes Flamberge grin. 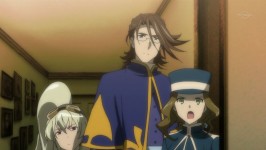 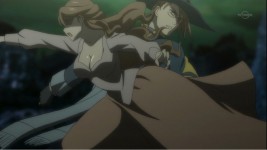 Han ventures up the path that they traveled down to get to the town originally, and follows the path that seems to have been wiped off the map.  At the end of the road, he finds a large barricade with the words “DO NOT ENTER” painted on it in big red letters.  He skirts around the barricade and finds the exact same town he was just in, except it’s burned to the ground.  Venturing down into the ruined city, Han starts investigating but his progress is halted by a prostitute curling onto his arm like a cat in heat.  Han asks her what she’s doing there and she seems confused as to what he’s talking about.  He clarifies for her, but she starts stuttering before finally attacking him.  Turns out, she’s just a wooden puppet which causes Han to grow even more suspicious of the town.  He returns to Mabel’s home to find Penny and Flamberge curled up together on the bed and Penny is happy to see that he returned.  Han asks her why she’s so relieved and she tells him that there have been people who visited before but no one ever returned.  Realizing that something is definitely going on, Han and Flamberge head out and tell Penny not to worry too much.  They venture up to the factory and start investigating and are surprised to find wooden dolls are alive and creating other wooden dolls.

Just then, Mabel appears and Han questions her as to whether or not she has a Phantom Book.  Turns out, she does!  A few years prior, when the war was in full swing, Mabel and her sister Penny managed to escape the damage, along with a few other townsfolk.  As Mabel watched the town burn, a mysterious young girl and her partner approached her and handed her a scroll.  Mabel then pulls out that scroll and tells Han that the scroll allows her to restore a soul to a wooden doll and order it to do whatever she wants.  Han seems to understand what’s going on.  In order to restore everything to what she thought she wanted, she created the dolls and ordered them to go along with what the original person did normally.  But when someone questions them with something they aren’t prepared to answer, they become hostile and try to eliminate the thing (or person) that caused that disruption.  Mabel seems horrified to realize that he knows exactly what she’s done and summons tons of those wooden dolls to attack Han and Flamberge.  Han then opens the gate to the Bibliotheca and pulls out a book, but instead of reading it, he places it into his staff, which acts as a gun of sorts.  He manages to burn all of the dolls, as well as the scroll and defeats Mabel.  Later that evening, he returns to Mabel’s home with her in tow and informs Penny that he erased her memories of everything since receiving the scroll.  Han and Flamberge then leave the town the next morning to continue their search for the mysterious girl. 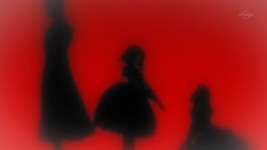 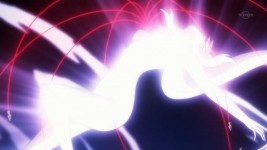 Opinions:  While this was definitely an intriguing episode, I don’t like Han and Flamberge as much as Huey and Dalian.  Han just seemed like a total jerk and was cold to everyone (though he did seem to show a bit of compassion to Mabel in the end).  Flamberge just didn’t have the same charisma that Dalian has and overall, I thought their characters fell a bit flat.  I am curious about the other yomihimes and Han’s status as a Libricide Officer, but other than that, the episode wasn’t terribly entertaining.  Hopefully we’ll get back to Dalian and Huey next week.