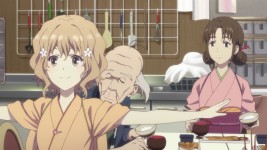 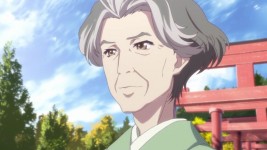 After last week where Minko finally seemed to show some sort of semblance of being able to sympathy for others, it seems like we took two steps back in terms of her development.  After everything was said and done with the school’s cultural festival, I really thought we’d see some improvement from Minko, but it looks like I was wrong.  The episode starts off with Ohana, Nako and Tomoe staring in what looks like awe, but also may be poorly disguised horror, as Enishi and Takako announce their engagement.  Takako then unveils her new nickname for Enishi, which is Enishing (gag me) though no one seems thrilled by the new nickname.  Before they can get too excited, Ohana’s grandmother shows up and asks what all the commotion is about.  Enishi flails and says that he wanted to tell her formally, but then asks for her blessing and his mother walks away, telling him that he can do whatever he wants.  Takako chases after her, Enishi hot on her heels, and asks her if she will not give them her blessing.  Of course, she’s calling her “mother” the whole time, which causes Ohana’s grandma to snap at her and tell her that while within the grounds of the inn she is to be known as Madam Manager and is not Enishi’s mother, but his boss.  Enishi doesn’t seem surprised by this statement, but is surprised when his mother says that if they’re going to get married, they ought to have a proper wedding ceremony.

After their surprise announcement, the staff is in the break room eating breakfast when Enishi starts whining about the costs of weddings.  Takako is busy flipping through a small book looking for places to go for the ceremony and is surprised that a wedding in a nicer hotel will cost up to several million Yen.  Ohana looks concerned about the financial aspects of a wedding, but when Denroku (aka Bean Man) looks at Ohana, she seems to get an idea.  She then suggests that they have the wedding at the Kissuiso so that a lot of the expenses would be covered by the inn, which would keep the stress of finances off of Enishi and Takako.  At first some people are surprised, but Ren said that Tohru could handle the food for the reception and Tomoe says that she could take on a few more guests so that Nako and Ohana could help waitress the event.  Soon, everyone is in agreement that they should have the wedding at Kissuiso and Enishi is weeping while thanking them, but Takako still doesn’t look super thrilled about the whole wedding thing.  Tohru suddenly stands up and tells Minko that they’re headed to the market to start preparing for the big day and Minko eagerly agrees to go with him.  Meanwhile, Ohana’s grandmother has left the inn to go to the shrine where the Bonbori festival is held every year.  Though we don’t know if she was praying or asking for help for something from the spirits, she’s looking over the mountain-tops at the Kissuiso with a small smile on her face. 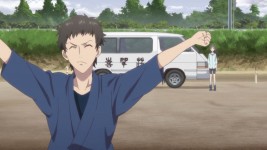 Awhile later, we see Tohru and Minko at the market looking at potential ingredients for the wedding’s menu.  Tohru decides to go ahead and buy some so that he can practice what he wants to make for the big day and even suggests to Minko that they do the omelet rice that he had during the cultural festival.  He goes on to say that he thought that writing “love” on the omelets would be a neat thing to do for a wedding.  Minko is surprised that he brought that up, but is flustered regardless, though I think she realizes that he wasn’t aware that it was a love confession from her.  Meanwhile, Ohana and Nako are trying to figure out some of the expenses for the wedding when Jiro appears and hands Nako something.  She yelps and throws the book into the air, proclaiming that she’ll get pregnant from reading it.  Ohana tells Jiro that he’s committing sexual harassment, but Jiro doesn’t think he is.On the way back to the inn, Tohru asks Minko if she wants to stop for a bit before heading back to the inn.  Of course, Minko sees a hotel and thinks that he wants to stop there and becomes flustered when Tohru really meant the beach.  The two of them get out of the car and Tohru tells Minko that she’s been acting strangely lately and he’s concerned for her.  This causes Minko to feel happy that he cares enough about her to be worried for her and she tells him that she hopes the wedding will be a success.  Tohru’s next comment shatters what little bubble of happiness Minko had; he tells her that she’s started to act more like Ohana lately and laughs when he says that Ohana has a way about her where she gets excited about something and drags everyone with her, even if they didn’t initially want to go along with it.  Of course, Minko realizes that Tohru actually likes Ohana instead of her and becomes bitter about everything.  Meanwhile, Enishi and Takako are discussing expenses for the wedding.  Takako says that she can rent out a dress and they can get cheap rings, but Enishi puts his foot down and says that at the very least, the rings need to be nice.  Takako then stands up and says that she has somewhere to be, but refuses Enishi’s offer to escort her to the door.

Once Tohru and Minko return from their trip to the market, Ohana goes to meet them and is surprised that Tohru bought so much food already.  She goes to help Minko bring things inside, but Minko blows her off and says they don’t need her help.  Ohana is startled by how hostile Minko is towards her, but doesn’t push the issue.  Later that night, Minko is in the bath and Ohana enters, which just seems to piss off Minko more than she already was.  Ohana asks Minko if she did something to upset her and Minko snaps at her, saying that she should just date Tohru and that her voice is loud, annoying and disgusting.  Ohana is offended by the last part (apparently she’s used to being told she’s loud and annoying) and demands to know what the hell pissed Minko off so much.  When Minko tells her again that she should just date Tohru and get it over with, Ohana grabs her arm before she can storm out and asks her what she’s going to do if she does date Tohru.  Minko tells Ohana to die and storms out of the room, leaving a flabbergasted Ohana in her wake.  The next day at school, Nako and her new friend are taking down the curtains in their classroom because the teacher wants to replace them with red curtains.  Yuina makes the comment that it seems completely ero that they want red curtains, but Ohana and Nako get the idea of re-using the curtains for table cloths for the wedding.  So, during lunch, Ohana, Nako and Yuina head to the Home Ec room to use the sewing machines to rework the curtains.  Ohana is sewing by hand because according to Nako, she’s not good with technology.  However, Ohana is completely ignoring Nako and Yuina’s conversation because she’s too busy thinking about her argument with Minko to pay attention.  Nako and Yuina are amazed that she’s able to stitch so accurately and so quickly, which amused me.

Meanwhile, Takako has asked for a meeting with Enishi’s mother and informs her that she’d like to call the wedding off.  Ohana’s grandma doesn’t say anything, but instead opens up the family shrine and pulls out a small, carefully wrapped package and hands it to Takako.  As Takako unwraps it, she reveals that it’s the ring that her late husband gave her when they married.  She also tells Takako that they weren’t able to have a real wedding because they were busy taking over the inn (apparently the previous owners had no heirs).  But she did say that they went to the shrine during the bonbori festival and her husband made a wish that the Kissuiso would be prosperous.  Ohana’s grandma was surprised by the name, since Kissuiso stands for “an inn to please you”.  He would always wish for her happiness and Ohana’s grandmother then bows to Takako, formally asking her to keep Enishi happy.  This makes Takako start to cry and she admits that she was worried that Enishi wouldn’t succeed the inn.  Ohana’s grandma then tells her that Enishi won’t be succeeding the inn, which shocks Takako. 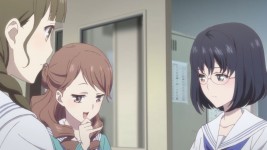 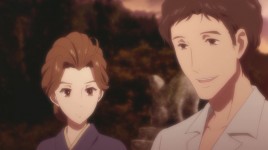 Opinions:  While this was a good episode, it also felt a bit lackluster despite the massive amounts of drama that happened.  Enishi and Takako’s engagement was definitely a surprise, but Takako’s new nickname for Enishi made me want to throw up.  It’s just…bad.  Why Enishi puts up with that, I’ll never know.  The whole thing with Minko taking her anger and frustrations out on Ohana wasn’t fair at all and I really wanted to slap her.  Having Ohana date Tohru when it’s obviously eating her up inside that Tohru likes Ohana is not the solution for the problem.  Minko really needs to get over her attitude problem and learn that blaming other people for things that aren’t in her control isn’t the way to handle things.  However, the flashback to when Ohana’s grandma got married and succeeded the inn was incredibly touching and I like the fact that they decided to include how Kissuiso got it’s name.  But when she said that Enishi wouldn’t be succeeding the inn, it made my jaw drop.  So now I’m trying to figure out who will be succeeding it.  We all know Ohana’s mom said she refuses to take over the inn, so perhaps Ohana will be next in line?  Or maybe she’s planning on passing it on to Tohru or Tomoe?  I guess we’ll have to wait and see how that pans out.