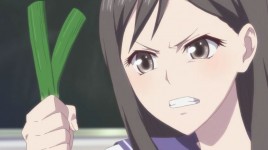 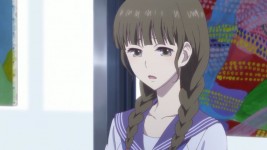 After the big fallout last week between Minko and the rest of her group for the cultural festival, I wasn’t entirely sure that everything would turn out well.  Though the road was a bit bumpy, it does look like things will turn out for the better, though whether Minko can properly apologize is left to be seen.  The episode starts off with Nako dreaming about the painting that the girl in her class asked her to name and she wakes with a start, saying she can’t breathe, though I’m sure that’s also partially because of the fact that her siblings are lying on top of her.  Meanwhile, at the Kissuiso, Ohana wakes with a start at her alarm, worried that it’s getting late and goes to wake Minko, but finds that she’s already gone.  Turns out, Minko has already left and is stopping at the market to do all of the shopping for the cafe.  On her way out, Ohana stops in the kitchen to ask Tohru is Minko was there and when he says that she already left, Ohana is surprised that Minko was serious about saying she’d do everything herself.  She suddenly asks Tohru if he knows how to make omelet rice before and Tohru says that he hasn’t, so Ohana asks if he even knows how to make it.  He laughs and asks her if she really wants omelet rice that badly, but Ohana tells him not to worry about it and makes her way to school.  On the train ride to school, both Ohana and Nako want to talk about the whole omelet rice ordeal, but neither of them can really get the courage to talk about it.

Once at school, everyone is completing their final preparations for the festival and Nako is busy hanging the paintings that the one girl has done.  As she’s hanging them, she overhears the three girls that got into an argument with Minko the previous day talking.  Apparently the one girl who threw a fit about omelet rice not being on the menu wants to apologize for her behavior, but the other girls keep telling her that she did nothing wrong and Minko is the one who should apologize.  Meanwhile, Ohana finds Minko in the classroom organizing the ingredients and asks her if she can help at all.  Minko tells Ohana she doesn’t need her help, but Ohana seems determined to show Minko that she can help out in the kitchen as well.  Hearing some commotion outside, Nako excuses herself to go see what’s wrong and is grabbed by Yuina, who tells her to come help them.  The two rush to Ohana’s classroom and find both Ohana and Minko furiously mincing onions with tears in their eyes.  Nako calls out to them to try and find out what’s wrong, but that only seems to set off Minko as she shouts at Ohana again, saying she doesn’t need any help.  After some more bickering, Yuina calmly tells them that there are others in the room and the two bickering girls look over to see the three girls who started the whole mess in the first place.  At this point, an awkward silence fills the room and Nako suggests that they get some lunch since it’s already late in the afternoon.  At first Minko says no, but when her stomach growls, she gives in since she needed to practice everything they were cooking anyway. 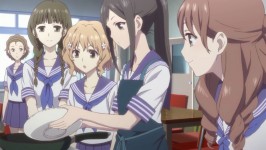 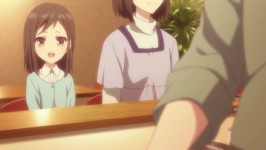 In the home economics room, which Minko got permission to borrow for the day, Minko sets about making omelet rice for everyone.  Everyone is awed by the fact that she’s efficient, much like a real chef and she admits that once a month, her mother would take her to Tokyo to go shopping.  While they were in Tokyo, they would stop at one of the higher end restaurants where Minko and her mother would always sit at the counter where Minko could watch the chef work.  She said that she would always continue to watch the chef even after she was finished eating and that she would always order the omelet rice.  Ohana asks Minko if that was why she decided that she wanted to be a chef and Minko looks embarrassed, but doesn’t say anything.  Once she is done cooking, she sets the plate down in front of the girls and they realize that Minko was right about not being able to cook omelet rice like that, but tells Minko that there’s another way they could cook it using the hot plates in the classroom.  After Minko has cooked everyone else’s lunch, Ohana makes Minko’s omelet rice by mixing the ketchup in with the rice beforehand and then putting the eggs into the pan.  Once the eggs were set, she placed the rice inside and rolled everything up.  Yuina seemed impressed by her ability to cook and she happily tells them that there were some nights where her mother came home late and wanted omelet rice, so Ohana had to learn how to make it quickly.  She then hands Minko the finished meal and Minko admits that it doesn’t taste too bad and that they could use it in the menu.

Back in the classroom, Minko is practicing making the omelet rice like Ohana showed her, but Ohana is in charge of eating all of the failed attempts, which she isn’t too happy about.  When she voices her opinions on the matter, Minko tells her to shut up since she offered to help.  Nako is happy to watch them prepare, but then she suddenly remembers that she was supposed to be helping her own class and hastily returns to the room.  When she arrives, she finds the other girl painting and she apologizes profusely, but the other girl tells her that it’s okay and that she had a painting that she wanted to work on some more.  Nako asks her what she was painting and the girl smiles, saying she was painting Nako.  Later that day, the cultural festival is in full swing and it seems as though Ohana’s classroom is very popular.  The boy that Minko rejected showed up and the girl that threw the fit about having omelet rice brings him his order and writes “love” on his omelet in ketchup.  Of course, the boy is shocked and the two of them are embarrassed, but I think the girl was also proud of herself for being able to confess to him.  Tohru eventually shows up and looks at the menu, chuckling at how it seems to be just like Minko to make, but he decides to order the omelet rice, much to everyone’s surprise.  Minko personally makes it for him and ends up staring at the bottles of ketchup, a very embarrassed look on her face.  Ohana receives Tohru’s order and is shocked, but delivers it to him anyway, informing him that it was made specially by their head chef.  At first, Tohru is surprised, but he looks over and sees that the other boy has “love” written on his omelet as well, he thinks it’s just something that they’re doing for everyone and thinks nothing of it.  After their cafe is done, Ohana and everyone else head to Nako’s classroom to see the art gallery and they watch the bonfire being lit from the classroom window.  We then get to see the painting that Nako’s new friend was working on and that it was titled ‘Friend’.  As the group leaves, Ohana and Yuina tease Minko about what she decided to do and Nako follows them happily. 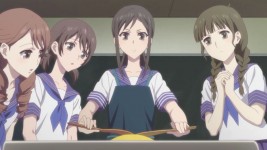 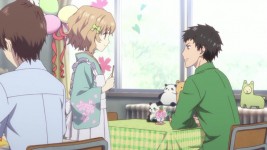 Opinions:  This was definitely a good episode.  We got to learn why Minko decided that she wanted to be a chef so early in life and that it was possibly the one thing that she and her mother did as a way to bond with one another.  Though we don’t know that for sure, since we still haven’t met Minko’s family.  Seeing that Minko was willing to compromise was a good hint that she’s learning that she doesn’t need to do everything by herself.  Even the fact that Nako was able to make a new friend was touching and shows that she’s starting to become more comfortable around new people.  Minko’s confession to Tohru was cute, but it’s a shame that he thought it was something that they did for everyone who ordered omelet rice.  It will be interesting to see how things will turn out and if Tohru will even realize that it was a legitimate confession.  One thing I can say is don’t watch this episode if you’re hungry because this episode will not make your hunger any better.