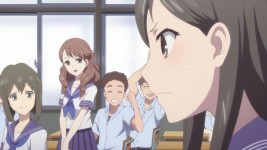 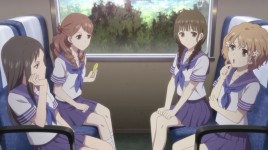 It seems as though I got my wish for a Minko-centric episode granted!  Though it’s not entirely about her, we do get to see more of her than we normally do which I’m happy for.  This week, the cultural festival is happening at school and everyone – especially Ohana – seems really excited about it.  Everyone except for Minko that is.  The episode starts off with Minko in the kitchen with Tohru and Ren at the end of the day, sharpening knives while Ren prepares stock for the next day’s meals.  Nako appears in the kitchen and tells Ren that one of the rooms asked to change their meals and before she leaves, she tells Ren that she thinks the shaved line in his eyebrow is really cool (which of course, causes Ren to blush and splutter).  Tohru makes the comment that Nako has been much more outgoing and Minko seems to be a bit bitter that he’s noticed that.  Just then, the phone rings and Tohru goes to answer it; turns out it’s Ohana calling for Minko but she refuses to talk to her, so Tohru does instead.  Minko becomes much more irritated the longer he talks to Ohana and she ends up slipping up while sharpening the knife and holding it like she might stab someone, which startles Ren.  The next day at school, the class votes on what they want to do and they decided on a princess cafe in response to their two princesses, Yuina and Minko.  The class votes Yuina to be head of the waitresses, which she takes in stride, and Minko as head of the cooking staff, which she tries to argue against.  Yuina winks at her and tells her that the two princesses should work hard together, which throws the whole class (mostly the boys) into a frenzy.

After school, the girls are on the train ride home (Yuina actually opted to ride home with them instead of taking the town car that usually takes her to school and picks her up) and they’re discussing the cultural festival.  Ohana seems to be the most excited out of the group because she’s never seen a classroom so excited about working together; apparently in Tokyo, everyone thought it was too old of a tradition and thought it was boring.  Minko still doesn’t seem very excited about the whole thing, especially about having to be the leader of a group.  Once at work, Ohana and Nako tell Tomoe about the cultural festival and though Tomoe is apprehensive about letting them go for the whole weekend, Ohana’s grandmother says that it’s fine because they should participate in school functions just like everyone else.  This thrills Ohana and the girls go to tell Minko the good news, but when they do, Ren is slightly shocked because Minko never mentioned it.  She apologizes, saying that she never thought that she would be elected as the leader for the cooking portion of the cafe.  Tohru asks what day it’s on and when the girls tell him that it’s on Sunday, he says that may see if he can leave during lunch and visit their class.  This seems to perk up Minko and give her another opinion of her tasks for the cafe, since it’s her chance to really impress Tohru.  After telling Minko the good news, Ohana and Nako are cleaning the bath while Jiro watches and then declares that his next big novel will be about the passions teenage girls have about the cultural festivals.  Neither girl is amused and Ohana tells Jiro to get back to work.  Later that night, after their shifts are over, Ohana walks with Nako a bit and asks her what her class is doing for the festival.  Nako tells her that one of the girls in her class is part of the fine arts club, so they decided to display her work with a piece of artwork that everyone does individually surrounding it.  Ohana thinks it sounds really cool, though Nako thinks that what Ohana’s class is doing sounds a lot better than her class.  Once back at the inn, Ohana heads to bed and tells Minko about what Nako’s class is doing and how cool it sounds, but Minko barely hears her because she’s too busy planning the menu for the cafe. 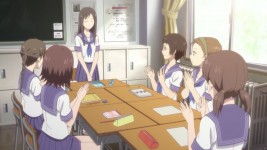 The next day, after classes are finished, Minko introduces herself to the group that was chosen to do the cooking and then starts going over the menu that she’s planned.  One of the girls tells her that they can’t do broiled fish because they’re not allowed to use gas in the classroom.  Someone else suggests using the home ec room, but one of them says that it’s too far away and the idea is instantly dismissed.  One of the girls then suggests that they make omlette rice and that seems to be pretty popular with everyone except Minko, but she jots it down to consider it anyway.  Meanwhile, Ohana and Yuina are in the group of waitresses and they’re discussing what sort of costumes they can wear and Ohana pulls out the kimono and apron that she wore before and said that her grandma said that they can borrow them for the duration of the festival.  Everyone loves the idea and Yuina declares that Ohana will show everyone the ins and outs of being a good waitress, which flatters Ohana and only seems to make her more excited.  While everyone in Ohana’s class is busy, we get a peek at what Nako’s class is doing and it turns out that it’s only her and the girl in the fine arts club doing all of the work.  Nako is a bit concerned about it, but the other girl isn’t worried since according to her, it was inevitable since no one likes to do things that they don’t enjoy.  Nako hesitantly agrees with her before picking up one of the paintings the girl has made.  She isn’t sure what it is because it’s abstract, but she says she really likes it.  The girl dully tells her that it’s upside down, which makes Nako panic and apologize profusely.

A few days pass and everything seems to be going well; the plans for the festival are coming along and Ohana brought in a kimono for Yuina to try on.  However, as the festival approaches, Ohana becomes overwhelmed with everything she has to do and has a strange dream of Ko dressed in a woman’s kimono.  He’s running along beside her and tells her that he’s always there to help her.  When Ohana wakes up on the train, she’s confused as to where that dream came from, but her thoughts are thrown out the window when Minko actually tells them that they should make the festival a success.  However, at school, Minko informs her group  of the menu and one girl is incredibly upset that they don’t have omlette rice on the menu.  She protests when Minko says that they don’t have the equipment to do it properly, saying that she only wanted to make it because it’s the boy she likes’ favorite dish.  Minko tells her that it’s absurd to mix work and love and another girl reminds Minko that the boy the other girl likes is the same boy she rejected on their class field trip and that the girl has liked him since middle school.  This causes Minko to snap and yell at the girl, saying that there’s no place for romance in the work place, which causes the girl to start crying and run out of the classroom.  Of course, Ohana and Yuina watch the whole thing go down and are in awe of what’s happened, but Ohana’s not entirely surprised.  Minko apologizes to the remaining girls and says that she thinks of this as another part of her job and she wants everything perfect.  She then leaves and tells them that she’ll do everything – including the shopping – herself, so they don’t need to worry.  Meanwhile, Nako is helping the girl hang her paintings, but the girl surprises her by asking her to name one of the paintings.  Nako is so caught off guard by this request that she blurts out “sloppy”, though we don’t get to see the girl’s reaction to it. 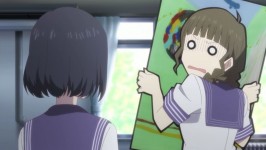 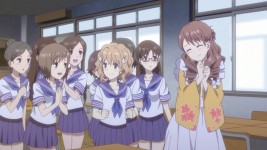 Opinions:  This was definitely a fun episode and the fact that we got to see a bit more of Minko made it even better.  Tohru saying that he wants to visit their classroom definitely seemed to light a fire under Minko, though she really should learn some tact.  While I feel bad for the girl that Minko scolded, it wasn’t entirely fair of the girl to demand that omlette rice be on the menu just because someone she likes happens to like that dish.  It’s emotional blackmail in a sense, especially since they brought up the fact that Minko rejected the boy that the girl likes.  It will be interesting to see how everything turns out in the end and whether or not Nako has offended the girl who asked her to name her paintings.  Lol, poor Nako.  She doesn’t even know what she’s doing anymore.