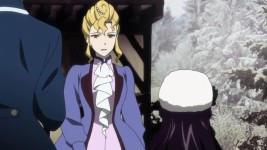 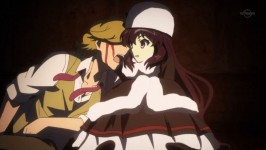 It seems as though Gainax is pulling out all the stops to bring us an intriguing – yet violent – story.  They don’t shy away from violence or blood like many animated adaptions do and I love them for being able to balance the gore with the plot-line as well as they are.  Once again, this week we don’t see the young girl in the Bibliotheca nor young Huey, but we do see a series of strange events that sets the tone for the episode.  A young man is hard at work on a novel – at least, I’m assuming he is – when a blond woman unlocks the door and enters.  He hands her the manuscript and says that since he is finished, she should follow through on her end of their deal.  She flips through the manuscript before throwing it on top of what suspiciously looks like a Phantom Book and telling him that it’s not good enough.  Much to the man’s horror, she says that she must teach him another lesson and pulls out what looks like a large machete and strikes him, saying “goodbye, my beloved.”  After that chilling event, we get a humorous look at Dalian getting angry about something in the book she’s reading and Huey – who has just returned home – asks her what’s wrong.  She shouts at him, saying that she can’t believe he only ordered the first two books in a trilogy and she’s furious that she can’t find out what will happen between the main character and his best friend/companion.  Huey calmly takes his seat at his desk and scolds her for reading something that wasn’t addressed to her (Dalian tells him that he shouldn’t have left it where she could find it) and tells her that there’s no way for him to get his hands on a book that doesn’t exist.  At first Dalian doesn’t understand what he’s saying, so he has to inform her that the author is still working on the final volume for the trilogy and that he has just received a letter requesting his presence at the author’s home.  This excites Dalian and she calls for him to hurry up because they shouldn’t be late.

After what I’m sure was a long car trip, Dalian and Huey arrive at Lenny Lents’ (the author) home in the mountains.  When they get out of the car, they’re greeted by the same blond woman we saw in the beginning of the episode.  Huey introduces himself and Dalian before informing the woman that he had received a letter from Lenny requesting his grandfather’s presence, but since his grandfather is dead, he is there in his stead.  The woman seems angry that Huey had received a letter from Lenny and coldly informs them that Lenny is busy working on his next novel and refuses to see anyone until he has completed the manuscript.  Dalian then pipes up and informs the woman that she’s there to find out what happens in the next novel because she’s a huge fan of his.  This causes the woman to warm up to them and she gushes about her husband’s work and how many people are in love with it, including herself.  She then tells Huey that Lenny is too busy to see them at the moment, but if he comes back tomorrow, he should be able to receive visitors.  Huey agrees, but as the woman and Dalian are talking, he notices a large blade in a bucket of water with blood still on the blade.  Dalian and Huey head back to the car and both of them agree that there’s something strange going on there (Dalian points out that Lenny’s wife died a long time ago and he wouldn’t dedicate a book to her just to remarry) and that they should return later that night to investigate.  When they do arrive, they manage to just avoid being seen by the blond woman – who is leaving the shed with the same blade as before covered in blood – and sneak into the shed when she’s no longer around.  When they enter the small building, Dalian slips on a stair and tumbles down the stairs and tumbles into the wall opposite the entrance.  Huey chuckles and asks her if she’s alright, which makes Dalian yell at him.  However, she’s cut short when the dead body of Lenny falls onto her shoulder. 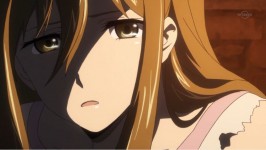 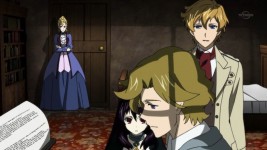 As any sane person would do, Dalian freaks out and shoves the dead body off of her before running back to Huey and using him as a shield.  Huey then ventures closer to the body and identifies it as Lenny, though he’s not sure why the man is dead in the first place.  He then notices a young woman in rags locked up in a cell crying for Lenny’s death.  Huey approaches her and asks who she is and what happened; the woman tells him that she was Lenny’s mistress but refuses to tell him anything else.  Instead, she tells him to get Lenny out of there as quickly as possible.  Huey and Dalian are a bit wary of her, but they do believe that there’s some sort of danger for both Lenny and the woman.  The next day, Huey and Dalian venture back to Lenny’s villa (it appears that the blond woman doesn’t know that they were there the night before) and she invites them in for tea before meeting Lenny.  However, this meeting consists of the woman gushing about how much she loves the books Lenny has written much to Dalian’s chagrin.  Dalian ends up telling the woman that they’re here to meet with Lenny, not spend all afternoon talking to her.  The woman is startled by Dalian’s bluntness, but decides to quote the book to get Dalian to calm down, but this only riles Dalian further.  Dalian huffs and tells her that she’s quoting the wrong chapter and corrects her, but when Huey notices the woman becoming angry, he covers Dalian’s mouth and tells Dalian that the woman was just testing her.  The woman agrees with Huey, but Dalian’s outburst seems to be just the thing to get the woman to actually let them see Lenny.  When they enter the room, Huey and Dalian are shocked to see the same man they found murdered in the shed alive and well.

Huey and Lenny talk for a bit while Dalian looks on and Lenny asks if it’s alright if he continues working while he chats with Huey.  Huey says it’s fine and it turns out, Lenny was just acting like he was writing to actually send Huey a message asking him to get his mistress out of the shed before nightfall.  He then crumples up the paper, saying that it’s no good to try writing and talk at the same time.  Huey then excuses himself so that he doesn’t disturb Lenny any further, but asks him to sign Dalian’s book before they leave.  Once back out to their car, Dalian compares the signature on her book to the signature in the letter that Lenny had sent Huey and confirms that they’re the same person.  That night, the duo returns to the shed only to find the woman lying in the middle of the room dead, much like how they found Lenny the previous night.  Lenny then enters the shed and tells them that they need to get her out of there before the other woman finds them.  Unfortunately, the woman is right behind Lenny and shoots him in the kneecap with a shotgun, which sends him to the floor.  She locks Huey and Dalian up and Lenny manages to crawl over to his mistress to hold her body and the woman shoots his other kneecap.  She then explains that thanks to her book of Soul Exchange, she can kill them as many times as she wants and nothing will happen.  She demonstrates this by shooting Lenny in the head, which causes the woman to regain her life, before shooting the girl in the head again to revive Lenny.  This cycle continues as the woman reveals that she is indeed not Lenny’s wife, but a deranged fan that locked him up and forced him to rewrite the book because August (one of the characters) wasn’t supposed to die.  Dalian scoffs at that and tells the woman that August shouldn’t survive at all and that she was surprised the character even got a name.  This infuriates the woman and she turns her gun on Dalian, but is interrupted when a bright glowing light appears beside her.  As it turns out, the bodies of those using the soul exchange still decay, as do their souls, and with the amount of times the woman has killed Lenny and his mistress, something was bound to happen.  The two souls of the dead lovers merge with each other to create a monster that kills the blond woman, extracting it’s revenge on her by tearing her limb from limb.  Dalian tells Huey that she grants him permission to open the gates, but he tells her that it won’t be necessary.  The last thing they see before the light disperses is two figures embracing each other.  On the way home, Dalian finds out that Lenny had sent them the final manuscript, but she’s furious about the ending and decides to rewrite it for him.  Huey can only chuckle at this as they continue home. 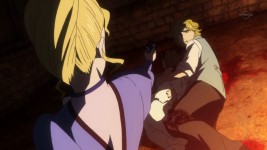 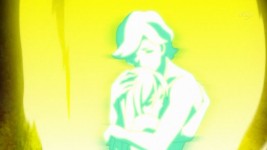 Opinions:  This episode was a lot more graphic in terms of violence than I expected, but I think Gainax was able to show the rawness of the woman’s feelings (and how equally deranged she was) really well by doing so.  It was both a tragic story for Lenny and his mistress, but also captured how people can become monsters themselves when obsessed with something.  If anything, I think it had a good moral to the story.  The fact that Huey didn’t even have to fight against Lenny and his mistress once they killed the other woman was another shocking thing, but it also showed the viewer that the couple only wanted revenge for their mistreatment and once they got it, they were happy to move on.  This was a really interesting episode and I’m excited to see where the series will go from here.  Though I wonder when we’ll get to see Huey use the books to fight again and if we’ll ever meet any other yomihimes.