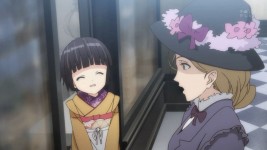 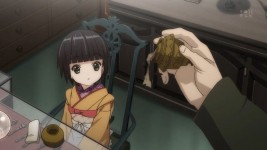 This week, instead of having to deal with Alice trying to manipulate/bribe Yune into staying with her forever, we get a look into the subtle culture differences between Japan and France.  While it is a fairly emotional episode – especially for Yune – it gives the viewer a good look at how something one person says may change the way another person perceives something.  This week, the episode starts off with Yune watching Claude working on something.  Claude pauses in what he’s doing and tells Yune that she’s one of the hardest working people he knows – which makes Yune light up like a Christmas tree – but then deflates her when he tells her that he can’t work when she stares at him.  This shocks Yune and she darts behind a doorway and peeks at him around the corner, but Claude sighs and tells her that distance isn’t really the issue here.  He then hands her a coin and tells her who the woman on the front is (I honestly don’t remember her name) and explains that she’s the patron saint of freedom or something.  Yune doesn’t seem to understand what Claude is trying to tell her, but before Claude can get any more frustrated, Oscar enters the room.  He explains to Claude that the Japanese tend to have a group mentality and like to do things as a group rather than independently.  Things start to finally click for Claude when Oscar goes on to say that Yune would much rather be of use to them by assisting them in their work instead of doing something else.  Claude sighs and tells Yune to go polish the lamps or something to keep herself busy.  Yune looks thrilled that she has a job to do and happily skips off to do the task, much to Claude’s exasperation.

While sitting behind the counter polishing an old oil lamp, Yune spots a woman looking at some of their wares in the window.  She hops up and eagerly goes out to greet the woman, asking her if there’s anything she can help with.  The woman looks taken aback by Yune’s chipper demeanor and quickly cuts Yune off and tells her she has to go before hurrying away.  When Yune re-enters the store, she sees Claude standing there scowling at her.  Yune asks him if it was something she did that drove the woman away and Claude tells her that in France, people are afraid of people who are too friendly since they tend to have something to hide.  Yune doesn’t understand, so Claude tries to explain that in France, there are people who can’t afford meals, so they usually act friendly to get close enough to someone in order to steal from them.  He then tells Yune that all she needs to do is sit behind the counter and wait for someone to speak to her instead of approaching customers.  Before Yune can argue with him, she  notices a young blond-haired child (the one we’ve seen numerous times staring in the windows) and she smiles and waves at him, but the boy runs off.  Claude sighs and tells her that’s exactly what he was talking about and tells her to just sit at the counter.  Yune does as she’s told, but is depressed that she can’t share her feelings with others and notes how different things are in France.  Oscar appears and startles her from her thoughts; he picks up the oil lamp she’s been busy polishing and notes that the wick is too old to be used anymore.  He goes on in a tangent – not entirely aimed at Yune, but just speaking in general – about how with the invention of oil lamps, candles have gone out of style and how eventually, electricity will come to their city and oil lamps will go out of style and become useless as well.  This doesn’t do much to cheer Yune up, since she thinks that he’s talking about her. 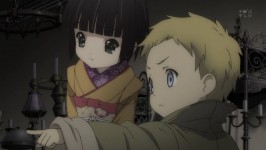 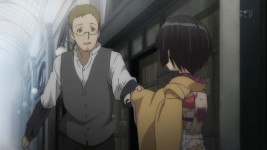 Before Yune can say anything, Claude reappears and notices that Oscar has a suitcase with him.  When he asks him about it, Oscar chuckles and says that the desire to travel again has struck him and he’s off.  This shocks both of them – Yune because she wasn’t expecting him to leave until he took her back to Japan and Claude because he had just gotten back from Japan – but they let him go without much fuss.  Yune asks Claude why Oscar likes to travel a lot and Claude tells her that it’s his freedom and that so long as his grandfather is happy, he’ll be happy.  Claude then returns to work and Yune returns to her counter with the oil lamp.  Not much time passes before the blond-haired child is back and actually enters the store.  Yune asks him if there’s anything he’d like to see and when he points to a candle-holder, she smiles but is taken aback when the child snags the candle holder and takes off with it.  After her shock wears off, Yune takes chase after the boy, shouting after him to wait up and give it back.  Unfortunately, she loses sight of him and becomes lost in the gallery.  Meanwhile, Claude heard a crash as a few items fell off of the stands when the boy made off with the candle-holder and goes upstairs to check it out.  He’s shocked to see Yune gone and the store’s door wide open.  Ignoring his work, he sets out to look for Yune.  While he’s checking in with his neighboring shop keepers and friends to see if they’ve seen Yune, Yune is busy trying to gather information.  She approaches a young girl and cheerfully asks her if she’s seen a young boy pass by; the girl becomes frightened and runs back to her parents before shooting Yune a wary glance over her shoulder.  This upsets Yune, but doesn’t deter her as she approaches several other people to ask if she’s seen the boy.  Unfortunately, they all seem too busy to even look at her and this frightens her.

She then takes off again, trying to find her way back to the shop and realizes that if she goes outside, she may know where to go.  As she heads towards one of the entrances, she’s startled by an angry looking man complaining about the rain.  When he looks at her, she squeaks before turning around and running away, much to the man’s confusion.  Yune becomes more and more frightened as she tries to find her way back and is startled when a young man grabs her hand.  It turns out to be one of Claude’s friends who went out to help him look for Yune, though he’s never met the girl before.  Yune is scared of him and screams at him to let her go and runs away again, leaving the man confused in her wake.  Yune continues running through the gallery and is suddenly stopped when someone grabs her and pulls her close.  Turns out, this someone is actually Claude and he looks incredibly relieved that he’s managed to find her.  Yune apologizes for running away and for letting something get stolen, but Claude tells her that nothing is more important that her safety.  Claude’s friend – whose name is Allen – appears and formally introduces himself to Yune after telling Claude that she really managed to get away before he knew what to do.  Claude then tells Yune that not all French people are scary as he led her to believe and that once you become friends with someone, they’ll treat you as preciously as family for the rest of their lives.  When Yune doesn’t seem to believe him, he asks her if she thinks that he is scary; when she says no, he chuckles and tells her to believe him when he says not everyone is scary.  Later that night, Oscar suddenly returns home (Claude scolds him and says that he can’t randomly show up and expect them to have dinner prepared for him) and informs them that he was too worried about Yune to leave the country.  He suddenly asks Yune to bring him the oil lamp she was cleaning earlier and replaces the wick for her.  He goes on to say that the oil lamp is like Yune because ever since she’s come to stay with them, she’s cast a gentle glow in their hearts.  Claude suspects that he ran into one of his mistresses and decided to go out to dinner with her.  His suspicions are correct when Oscar suddenly pulls out a bouquet of flowers and hands one to Yune, asking her to take care of Claude for him before excusing himself for the evening.  After the credits, we see the little boy who had stolen from Yune sitting in the slums with a cat and a loaf of bread eating. 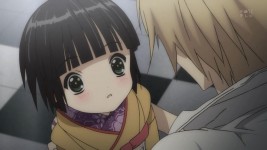 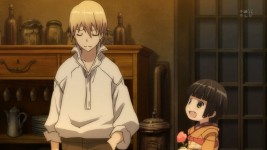 Opinions:  Yet again, this was an incredibly solid episode.  Not only did Yune meet some new people, but she learned the harsh reality that France is quite a bit different from Japan.  The whole ordeal with the thief may have shaken her to the point where she thought every person in France was scary, but I think Claude handled her fears really well.  The fact that he was so worried about her that he actually left his shop to look for her was touching, especially when he told her that nothing is more important that her safety.  I am curious as to whether the beggar-boy will reappear in the series later on and possibly if Yune will befriend him, but that’s something we’ll have to wait and see on, I suppose.  I hate to admit it, but I hope that Claude and Yune do end up together in the end of the series (Yune’s technially 12 or 13 despite her looks and Claude’s only 15 or 16, so it could work!) but I also wouldn’t mind them just remaining close friends.  I’m also interested to see how next week’s episode will turn out since Alice makes a reappearance.