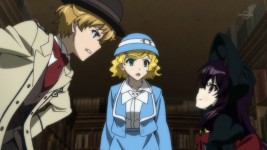 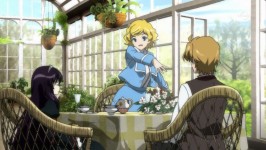 It seems as though Gainax decided to throw a wrench into my theory about whether we get a peek at what Phantom Books Huey will be using in the episode by, well, making this episode about something else entirely.  While Phantom Books are still a central part of the episode, there’s no epic battles utilizing the books like in previous episodes.  But even with this little wrench thrown in, it was still an excellent episode.  This week, instead of seeing a young Huey in the Biblitheca, we see several grade-school students whispering to each other and laughing about how the adults in their world are going to drag everything down and how they’ll laugh when civilization as they know it ends.  Ominous, right?  Anywho, after the opening credits, we see Huey and Dalian in a bookstore and Huey is searching for something interesting to read.  However, Dalian has taken it upon herself to spite him and ruin the ending to every book he picks up by telling him exactly how it ends and who committed whatever crime the mystery novels are about.  This obviously irritates Huey (as it would anyone for that matter) and he asks her what her problem is.  Dalian huffs and says that he deserves it for ignoring her; Huey denies that he ever said he ignored her and merely asked her to hold on for a moment.  Dalian shouts at him and tells him that she should never have to wait for anyone, let alone him, but before Huey can retort a young woman scolds them for shouting in the library.  As it turns out, this young woman’s name is Carilla and she’s a childhood friend of Huey’s.  Dalian doesn’t seem amused by this development – in fact, she seems furious and a bit jealous that Huey is blatantly ignoring her to talk to Carilla – and snubs all of Carilla’s attempts to be polite.  Carilla invites the two of them to tea and when Dalian initially refuses, she manages to bribe her into coming by saying how they have the best scones there along with clotted cream and jam.  This piques Dalian’s curiosity and she urges them to hurry as she storms out of the book store.

Once at Carilla’s villa, the trio sit down to have tea – though Dalian is all too impatient to get her hands on those scones – and Huey asks Carilla when she returned to the country from the New World.  She says she just recently got back and was looking for children’s textbooks because she’s planning on setting up a schoolhouse for the town’s children.  Suddenly, she looks rather glum and mentions that one of their old classmates opened up a schoolhouse to compete with her and that the woman was bragging about finding a Phantom Book that increased her student’s intelligence.  This gets Dalian’s attention, though she brushes Huey’s concern about the book away and demands that Carilla serve the scones that they promised.  Carilla tells her that they’ll be there in a moment before returning her attention to Huey and telling him that the woman said that after using the Phantom Book, her students became monsters and frightened her, so she has locked herself into her home.  Huey suddenly stands up and informs Dalian that they need to hurry and while she agrees, she’s also disappointed that she didn’t get her treats.  Once they arrive at the woman’s home, she informs them that the students are in the small building just down the path from her home and Huey and Dalian head off.  The woman warns them that the children are no longer human before letting them go.  Upon entering the schoolhouse, Huey spots the Phantom Book sitting on a table and is greeted by the woman’s students.  They seems to know exactly who they are and what they’re there for, but don’t seem to mind letting go of the book.  After a short conversation in which the children explain that they don’t plan to do anything with the knowledge that they have other than living ordinary, boring lives, Huey snags the book and the two leave the schoolhouse.  On the way back to Carilla’s villa, Huey asks Dalian if she wants the book and when she says no, he asks Carilla.  Carilla admits that it’s tempting, but she’d rather work hard along with her students instead of cheating.  This seems to be enough for Huey and he stops at the riverside and sets fire to the book so that no one else can use it. 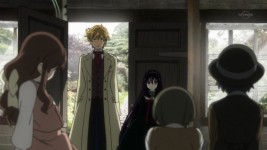 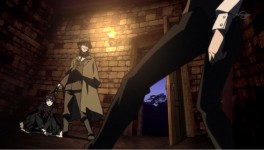 After returning home from a dinner at Carilla’s home, we see Dalian watering what looks like a giant cactus.  Huey joins her in the greenhouse and asks her what it is.  She explains that it’s a cactus that’s normally found in Africa that Huey’s grandfather bought and brought home on his travels.  She then tells him that it should be blooming that night and she can’t wait to see it finally bloom.  Huey smiles and tells her that he’s happy that she’s sweeter than he initially thought because he was surprised to see that she cares for plants just as much as books.  This warrants him a swift kick in the back of the knee as Dalian scoffs and tells him to make himself useful instead of standing there like an idiot.  Huey tries to stay happy as he shows the box of Swiss chocolates Carilla had sent home with him, especially for Dalian.  This seems to perk up Dalian and she demands that he make them some tea.  When he tells her that it’s too late for tea, she yells at him, threatening to eat the whole box of chocolates by herself and that she won’t share with him.  She then storms off and Huey shakes his head before following her.  Before he can make any tea to placate Dalian, there’s a knock at the door and Huey goes to answer the door.  Two men are standing there, saying that they’re looking for Huey’s grandfather.  When he informs them that his grandfather passed away a while ago, they men tisk and say that it’s a shame because they were finally able to locate the item his grandfather was looking for.  Huey inquires as to what it is, but its attacked by the shorter of the two men and Dalian is taken at gunpoint.  Huey has no choice but to let the men capture them so that nothing happens to Dalian.  The two of them are bound in rope in the library and Dalian wastes no time in criticizing Huey, but he tries to ignore it as the two men are also interrogating him about the locations of the Queen of Night.  They tell him that it’s a very expensive book that they know his grandfather spent a lot of money on.

Things start to click and Huey realizes that they’re bandits that work for a company outside London.  The company researches wealthy people and inform bandits about the location of certain items.  They then buy the item from the bandits before selling it to the highest bidder for a profit.  The bandits laugh and congratulate him on knowing about their company before pistol whipping him and demanding that he tell them where the book is.  Dalian tells them that there’s no way you can search for a book that doesn’t exist before glancing out towards the greenhouse.  The bandits – who have already suffered from a long-winded berating from Dalian – decide to go check out the greenhouse.  Dalian shouts after them and tells them not to go, but a few minutes later, Huey and Dalian hear screams and gunshots.  Huey gets the two of them unbound by using a letter opener to cut through the rope and the duo enter the greenhouse to see neither hide nor hair of the bandits, but a gun is lying on the ground.  Dalian sighs and tells Huey not to go near the plant, who has now bloomed into a book-like state.  She explains that the plant itself is called the Queen of Night and it only blooms once every thirteen years.  However, it’s a carnivorous plant and lures people who are greedy to it by using the bloom that looks like a book.  While the person is reading the “book”, the plant eats them.  Unfortunately, once the plant has enough sustenance, it withers.  Dalian tells Huey that the book is said to have the thoughts of the plant’s victims written on it’s pages and she hoped to be able to read them.  Huey tells her that they’ll just have to wait another thirteen years to read it.  The next morning, Carilla stops by for tea and Dalian – who has made fun of her about her fashion from the moment she met Carilla – criticizes Carilla on her choice of clothing.  Carilla is surprised, saying that the clothing she’s wearing is common in the Americas, but Dalian scoffs at her.  Carilla sneakily hands Dalian some cookies, which seems to win her over…for now.  Meanwhile, Huey informs her about the burglary, but leaves out several crucial details by saying that the burglars just left when they realized there was nothing of value there.  Carilla doesn’t believe him, but leaves the topic alone. 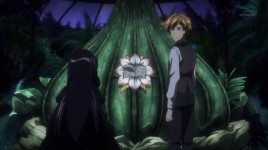 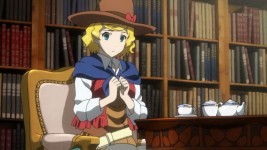 Opinions:  Although this episode didn’t have a huge amount of action, it was still a captivating episode.  The rivalry between Dalian and Carilla was well done and seeing Dalian being jealous of Carilla was adorable.  The fact that she’s only know Huey for a short time and is already this jealous when Huey ignores her to talk to someone else shows that she really has come to care for him.  Whether that’s on an emotional/romantic level or just because he is her Keeper is left to be seen.  The whole development with the plant in the greenhouse was intriguing and shows that Huey’s grandfather wasn’t just interested in books, but also in anything mystical or different.  Though there were two separate plot-lines in the episode, they were able to weave them together into one cohesive episode, which is great.  It was a wonderful episode and I wouldn’t mind having another episode like it in the future.