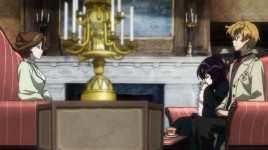 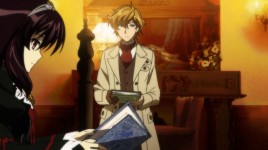 After being blown away by the first episode, needless to say, I was chomping at the bit to get my hands on the next episode.  I’m happy to say that this week’s episode was just as amazing as last week’s and managed to keep me on the edge of my seat.  Like last week’s episode, the episode starts off with young Huey inside of the Bibliotheca and speaking to the young woman there.  She hands him a rather large book and a large stone tablet and tells him to hurry because the doors will be closing soon.  Huey nods and turns to leave, but stops and informs the girl that he’ll be back soon.  The girl simply smiles at him.  Flash forward to the present, Hueyand Dalian having tea at a young woman’s estate.  This woman – who’s name is Estella Lilburn – and her grandfather recently passed away and she was hoping to have Huey’s grandfather do an appraisal on her grandfather’s library.  Huey informs Estella that his grandfather recently passed away as well and he’s come to take over his work.  Estella apologizes for sending a letter to him so soon after his grandfather’s death (she says she knew nothing about it, which is believable) and Huey tells her not to worry.  Dalian pipes up and says that Huey was enticed by the check Estella included in the letter and Huey apologizes for Dalian’s attitude before saying that he’d be more than happy to take a look at her grandfather’s library.  Estella leads them into the library and Huey is impressed by the size of it.  Estella elaborates, telling him that her parents died when she was young, so she was the only living heir to the house and the library but she wasn’t able to figure out the value of the books.  Huey nods, asking her if that’s why she asked for his grandfather’s appraisal, but is distracted by a bell sounding in the distance.  Estella tells him that it is the carillon – a large music box-esque creation – that has been placed in the town’s clock tower.  Apparently this is another piece of her grandfather’s work and one that she is quite proud of.

Estella then leaves Huey and Dalian to their work, though Dalian doesn’t do much helping so much as she does reading of the Lilburn’s collection.  Huey is hunkered down over their books, but he is soon distracted and asks Dalian of her opinion of Estella.  Dalian doesn’t even pause to consider her answer before saying that Estella has the body of a boy, but Huey ignores her comment and wonders why she’s living all on her own.  Dalian asks Huey if he’s really that worried about her and when Huey says that he is a bit worried about her.  Dalian murmurs to herself and wonders if it’s Estella’s hairstyle that’s what is attracting Huey to her.  Before Huey can ask her what she was mumbling about, someone enters the room and calls out to Huey.  The man introduces himself as Martin Geese, a cousin of Estella’s.  Martin notices that Huey is wearing a glove on his right hand, but he doesn’t say anything about it.  As it turns out, Martin is also Estella’s legal guardian and he comes to visit her once a week.  Huey asks Martin if he is responsible for Estella’s residence in the mountains and Martin says that he did in fact hire the servants for her, but he is not forcing her to live there.  Huey asks him if Estella chose to live there and Martin says that is also incorrect.  He goes on to say that there is a curse on the house, one that kills any person who tries to remove Estella from the household.  Martin blames the curse on the Phantom Book that Estella’s grandfather owned, though he’s not entirely sure where it is in the library.  Huey agrees to do his best to figure out the mystery.  Later that night, Dalian and Huey retire to their rooms – or rather, Dalian decides to stay in Huey’s room – and Huey asks Dalian what she thinks.  She informs him that Phantom Books do not curse people or households, so it had to be something else.  Just then, Huey spots Martin and Estella walking on the grounds and when he hears a scream, he rushes outside, Dalian hot on his heels.  They find Martin dead and in the arms of what appears to be a golem with Estella covered in blood.  Huey shoots at the golem, but it manages to flee with Martin’s body and Estella seems to snap out of her trance, though she isn’t sure why she’s covered in blood.  Dalian looks like she isn’t convinced with the whole charade. 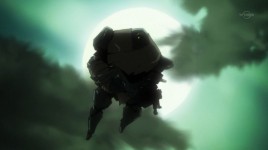 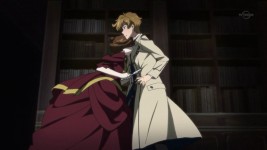 The next day, Huey and Dalian set back to work in the library and are surprised to see Estella bring them lunch.  Huey asks her if she cooked it all herself and she says yes, because all of the servants her cousin hired for her disappeared.  Estella asks Huey if he’ll be staying with her forever and Huey says that he’ll be staying there until he is finished with his work.  Estella doesn’t seem pleased with his answer, but she then asks Huey to call her Estella, since he insisted that she call him by his first name.  Huey seems reluctant to agree and continues calling her by her formal name, and this visibly upsets her.  As she turns away, Huey stands and tells her that he’s sorry if he upset her and as he goes to comfort her, she turns around and stabs him with the knife she was using to carve the beef for their lunch.  Huey is stunned, but thankfully Dalian slipped a book into the lining of his jacket, which stopped him from getting injured.  As Estella pulls away and asks Huey why he’s not bleeding, the carillon strikes noon and chimes – like it does every hour – and the golem appears, taking down a wall with it.  Huey is shocked to see the bodies of the missing servants at it’s feet and suddenly, everything seems to click into place.  Dalian figures out that Estella and her ancestors were part of a massacre a long time ago and her grandmother was exiled from the village.  Estella’s grandfather knew that she was a cold-blooded killer, so he created the golem using the Phantom Book to help keep her secrets from the neighboring town.  She then tells Huey that she acknowledges him as her keeper.

Huey pulls off his glove, says the incantation and retrieves the book from the Bibliotheca and it’s the same books he was given as a child in the beginning of the episode.  He reads both of them and although he is able to damage the golem, he isn’t able to defeat it.  Dalian tells him that he needs to find the object with 72 symbols that was used to create the golem because it has no sense of death.  Huey realizes that it’s the carillon and he reads the books once more, but aims his attack at the clock tower.  Once he destroyes the carillon, the golem is destroyed.  Before they can celebrate, Dalian notices that the clock tower is falling towards the estate and shouts at Huey, telling him that he’s an idiot.  As they run out of the library, Huey stops to ask Estella if she’s going to be coming with and she says no, because she doesn’t want to be alone.  Without much of a choice, Huey and Dalian leave her behind.  Back at Huey’s home, the two are sitting down to tea and discussing the most recent case.  Dalian tells Huey that it’s likely that Estella’s family participated in some odd disciplinary techniques, which could cause a post-traumatic condition that may cause people to lash out when triggered by an event.  Huey then mentions that the story was covered in the newspaper and Dalian isn’t surprised, considering the house was pretty much destroyed and there were dead bodies lying around.  Huey agrees and then asks her what caused her to change her hairstyle.  Dalian peeks out from behind her book and we see that her hair is up, similar to Estella’s hairstyle, and she says that she only wanted to try something different.  This causes Huey to start laughing, which makes Dalian huff in anger. 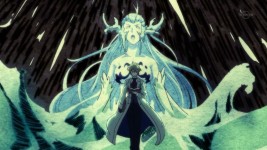 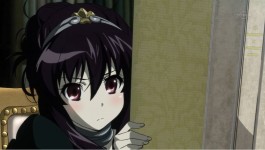 Opinions:  Yet another action-packed, but intriguing episode.  Dalian was definitely jealous of Huey paying attention to Estella, which was adorable.  The whole idea of a house cursing a young woman was interesting, though I definitely didn’t see Estella being a cold-blooded murderer actually happening.  It also seems that we’ll get a peek at what books Huey will be using to defeat whatever baddie appears at the beginning of every episode, which is very sneaky of the animators.  I was on the edge of my seat for the whole episode and the amount of suspense was perfectly balanced with the story.  Once again, Gainax has outdone themselves.  Rock on, Gainax!