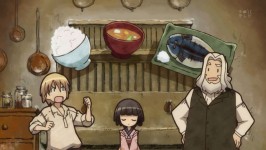 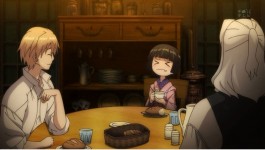 Once again, my Cute o’ Meter was broken in a million little pieces this week just by the sheer cuteness of this show.  The funny thing?  I’m totally okay with Yune trampling all over it.  This episode seems to center around Yune getting used to the cuisine in France as well as learning a little bit about her surroundings.  When the show kicks off, we see that Yune is already up and has set the table for breakfast when Oscar (Claude’s grandfather) enters the room.  Yune eagerly asks if there’s anything she can do to help with breakfast and Oscar chuckles a little before showing her the extent of their meal: day-old bread, cheese and coffee.  Yune seems a bit disappointed by the lack of what they have to eat and when Claude enters the room and sees that she’s disappointed, he asks why.  Claude then explains that in Japan, a typical breakfast consists of miso soup, rice and dried fish that’s grilled.  He goes on to explain that it’s typically a bit of a hassle to prepare, which is why Yune wanted to help cook, but Claude thinks it’s strange (Yune murmurs that for her, it’s normal).  And so, the group sits down for breakfast and Claude notices that Yune seems to be having trouble breaking her bread.  He offers to help her, but she refuses, saying that she can do it herself.  She does eventually break the bread and noms on it before turning her attention to the cheese.  Oscar offers her some, saying that any French man can’t go without his daily cheese.  Yune sniffs it and appears to be repulsed by the smell, but tosses a piece into her mouth anyway.  Claude tells her not to force herself and Yune says she’s fine before turning her attention to the coffee on the table.  Again, Oscar hands her a cup of coffee and she downs it, saying that it’s delicious and that she really likes it, though the expression on her face would say otherwise.

After breakfast is cleared, Yune wraps up her left over cheese and is about to take it to her room when Claude tells her that if she doesn’t like it, she doesn’t have to force herself to finish it.  Yune simply smiles and tells him that in Japan, if she couldn’t finish something from a meal, she would wrap it up and take it to her room to finish later.  Claude shrugs since there’s really no reason to argue with her about it and around then, Oscar appears and informs Claude and Yune that he’ll be out with a lady friend for most of the day and that he’ll be leaving them to their own devices.  This doesn’t seem to phase either Claude or Yune and the two set to work doing their respective tasks once Oscar leaves.  However, Yune finishes her cleaning fairly early and goes into the work shop to see if she can assist Claude in anyway.  While she watches Claude, we can see Claude visibly becoming unnerved by her presence and he tells her to go explore the gallery while he finishes up his work.  Yune sheepishly says that she doesn’t feel comfortable walking around without someone with her to show her where everything is because she’s not used to the area yet.  This perturbs Claude for a moment before he tells her to go sit in the front of the shop and wait for any customers that may show up.  A little while later, Claude appears with his jacket on and tells Yune to get ready to go to the market with him.  Surprised, Yune asks him about the shop and he merely pulls out a key to the store and tells her not to worry so much. 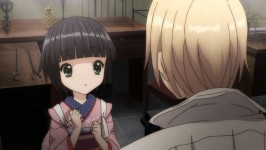 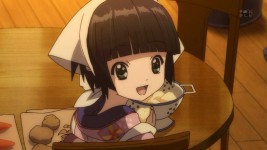 As the duo walks down the street towards the market, Yune is captivated by the different shops in town and is literally stopped in awe at a large department store.  She asks Claude what it is, and Claude informs her – with bitterness coating his words – that it’s a department store that was built in order to try and shut down all of the family owned stores in the gallery.  Oscar then shows up and says hello to the duo and Claude is horrified that his grandfather was in the department store.  He then demands to know if his lady friend asked him to buy her something and Oscar laughs and tells him not to worry.  He then turns his attention to Yune and tells her to have fun exploring before running off to rejoin his date.  Claude and Yune then set off down the street again and enter the market.  Yune is awed by all of the excitement and things going on in the market, but is especially captivated by the different vegetables.  As they make their way through the different stalls, she pauses to ask Claude what everything from and artichoke to an onion to mushrooms are and Claude happily answers for her.  Claude stops at the butcher shop and orders some bacon, but ends up only being able to take half of what he originally asked for because he didn’t have enough money.  On the way home, they stop at a paper shop and asks Yune if she’d like him to buy her some drawing supplies, but Yune notes the price of the paper and tells him that she doesn’t need it and then runs towards the house.

Once back home, Claude sets back to work on his project while Yune helps out by starting to peel and slice the vegetables for dinner.  As she’s peeling an onion, she pauses to take off her wooden sandals since they started to hurt her feet.  Claude enters the room to find her peeling potatoes while sitting in a chair and is a little shocked that she felt at home enough to make herself comfortable.  After Claude washes up, he starts making dinner and is surprised to see Oscar walk through the door.  However, the group settles down for dinner and Yune initially picks up her bowl and sips her soup, much like she would with miso soup and Claude corrects her by telling her to use her spoon.  After watching her struggle with the utensil, Oscar tells her that she can eat her soup however she feels most comfortable, but Yune is determined to use the spoon.  When Claude asks her why she’s so determined to use a spoon and like cheese when she clearly doesn’t, she confesses that she wants to learn what tastes good so that she can cook them both delicious food.  This seems to touch both Oscar and Claude and Oscar gently tells her not to push herself too hard and to take her time to get used to the food in France.  Later that night, Yune is in her room and facing the dreaded cheese from breakfast that day.  She takes a nibble, but promptly gets the most adorable look of displeasure on her face and shoves the offending food away.  The next morning before breakfast, Claude takes Yune to the bakery with him to get some fresh bread.  She comments that it smells really good and Claude tears off a chunk of the bread to let her try it.  Her face lights up as she eats it and Claude says that he enjoys seeing her happy about food instead of trying to force a happy face when she doesn’t like something.  At breakfast, Oscar offers Yune some coffee and she initially says no thank you, but he encourages her to try it again.  She does and realizes that he put cream and sugar in the coffee to make it sweeter and she likes it!  Oscar seems pleased and reminds her to take her time getting used to things, including cheese and coffee.  After the credits, we see Yune and Oscar snacking on some umeboshi and loving it.  When they leave the room, Claude – who has no idea what it is – tries one and is nearly incapacitated by how unpleasant it is. 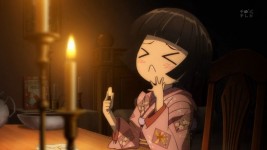 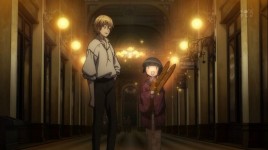 Opinions:  Another exceptionally cute episode!  I was curious about how Yune would adapt to the new cuisine in France, which includes dairy (which isn’t commonly found in Japanese cuisine) and I think they addressed the issue really well.  Yune was adorable as always and Claude was very patient with her, especially in the market.  I thought it was endearing that Yune was so curious about the different vegetables and she almost reminded me of a three year old that always asks their mother what something is.  The fact that Yune is forcing herself to get used to French cuisine quickly so that she can cook for Oscar and Claude was just too precious.  I’m definitely looking forward to what cute antics Yune will get into next week!