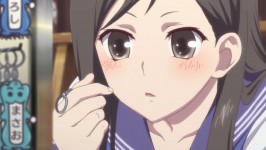 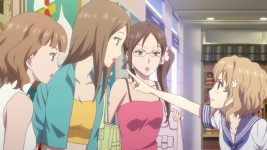 After Yuina dumped a whole truckload of drama on Yosuke’s lap in addition to the fact that all of their waitresses quit without any notice, I had a feeling things might get worse.  I was wrong, but somewhat right at the same time.  But most importantly, because of this episode, my entire impression of Yuina has changed.  The episode takes off where we left off last week; Yuina pretty much told Yosuke that she’s not interested in running an inn, so their engagement is kind of a moot point since that’s all Yosuke wants to do with his life.  Everyone is stunned, but that doesn’t stop the inn’s owner from pulling the remnants of his staff into a quick meeting to discuss their plan of action.  As usual, Ohana and Minko, along with Yuina, sneak along behind them and eavesdrop.  Several members of the staff are sent to call or visit neighboring inns to see if anyone has a few waitresses that they can spare for the remainder of the day.  Ohana, who apparently can’t stand to listen anymore, throws the door open and asks the owner to allow her to help them out.  She elaborates, saying that she’s been trained at the Kissuiso inn and she knows what to do and this seems to impress the inn’s owner, though he turns down her offer for help.  When she objects, he tells her that she’s on a field trip and should be enjoying herself, not worrying about his inn and their problems.  While Ohana doesn’t seem convinced, she leaves the room and joins the rest of her classmates on their way to go shopping.

Once at the shopping center, Ohana, Minko and Yuina spoke Nako and the girls start looking around for presents for their families and the rest of the staff at the inn.  Minko finds keychains with names on it and manages to find one with Tohru’s name on it and snags one, though she ends up trying to hide it when Ohana and Nako appear and try finding their names.  Not much later, Ohana spots the ex-waitresses from the inn at the food counter and while they’re discussing how they never want to work at an inn again because it was a pain in the ass, one of them accepts a mango soft-serve with fried chicken topping.  (I felt the need to mention it because it’s relevant to my interests and sounds oddly delicious.)  However, just as she accepts the odd, yet delicious looking treat, Ohana appears behind them and yells at them, telling the girls that they’re the pains in the ass, not the inn.  Unfortunately, the girl panicked and dropped her ice cream on her friend’s brand new shoes.  While the older girls are distracted, Minko and Nako grab Ohana and drag her into the bathroom to escape before they can do anything about it.  There, Ohana hands Nako and Minko her list of stuff to get her family members and informs them that she’s going to use the remainder of her free time – which her teacher said they could spend however they wanted – by helping out at the inn.  As she leaves the bathroom, she tells Nako and Minko to find something perverted for Jiro, which embarrasses the two girls. 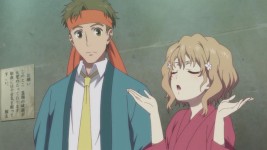 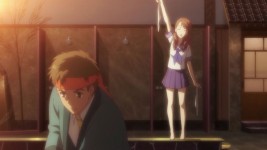 After managing to hail a cab, Ohana bursts into the inn’s main office and begs them to let her help out.  Seeing as none of the other inns can spare any waitresses, the inn’s owner isn’t able to say no to her, especially with dinner coming up soon.  He then turns to Yosuke and tells him to show Ohana their “secret weapon” and get started on preparing dinner.  After changing in to her new uniform, Ohana is delighted to be able to see the robot that the inn uses to transport the dishes from the kitchen to the dining hall.  Yosuke tells her that she’s weird and Ohana tells him that she at least knows how to do her job.  Yosuke sighs and confesses that he thought being stricter with the part-timers would work better, but he didn’t think it did.  When he asks Ohana how her grandmother supervises the staff, Ohana replies that she does so with a swift slap to the face.  Yosuke winces and mutters something about it being too mean, but Ohana shrugs it off and says that she was able to learn her job that way.  Yosuke then shows Ohana the robot and explains how it works and sets her to work while he goes to help the others clean up the baths.  At first, things are going well, but then things start getting backed up and Ohana gets overwhelmed and tries to do too much on her own.  She tries grabbing nearly ten trays laden with food at one time and almost falls, but is saved with Minko and Nako suddenly appear.  Apparently they had finished their shopping early, and since Nako couldn’t go swimming, they decided to give Ohana and the inn a hand.  Yosuke then appears with Nako and Minko’s uniforms and they decide on a plan of action; Minko should load the dishes of food onto the robot while Nako and Ohana start setting up the trays in the dining hall.  At first, everything goes perfectly, but then Minko appears and exclaims that the robot is broken!

After a quick assessment, the management is worried that since the robot will need a mechanic to come repair it, they won’t be able to meet the deadline for dinner or the baths.  Ohana then decides they should employ the “bath” technique.  She explains that when she was younger, if her mom came home from work earlier than she expected, she had them take a bath while she scraped together something for dinner.  The inn’s owner contemplates this for a moment before deciding that there’s nothing to lose by giving it a shot.  He then sends the men to start cleaning the baths while the girls continue setting the trays for dinner.  Meanwhile, Yuina is on the bus ride back to the inn and is wondering where Ohana, Minko and Nako have gone, but she realizes they probably went to help out with the inn.  Once the classes arrive at the inn and the new dinner plans are explained, Yuina goes in search of the other girls and finds Yosuke cleaning the women’s bath.  She enters and she finds out that Yosuke has no intention of being with her if she’s not willing to work hard.  Yuina then confesses that she doesn’t work because she chooses not to, but she’s not unable to work.  To prove her point, she grabs a brush and starts helping Yosuke clean the bath.  A while later, the bath is spic and span and dinner is set, thanks to Ohana wrangling the other girls in her class to help out.  At dinner that night,  Yosuke personally thanks everyone for helping out and stops by Yuina and Ohana’s table and tells them that he has a surprise for them.  That surprise turns out to be getting to use the outdoor bath that’s usually reserved for staff.  The next day, everyone is heading home and Yosuke calls Yuina aside and asks her if she’d still consider working at an inn.  She says maybe, but she’d have to think about it, and that seems good enough for Yosuke.  Once she arrives home, Yuina really seems to appreciate the inn that she’s an heir to and seems willing to work a little bit harder, if only to prove to herself that she can. 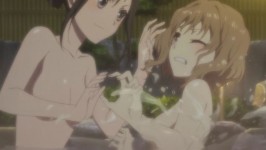 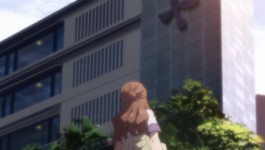 Opinions:  This was another good episode.  The way the drama between Yosuke and Yuina was resolved was done extremely well and even the fact that Ohana jumped in to help another inn that was in trouble was endearing.  Same for Nako and Minko.  Ohana’s little stunt with switching dinner and bath times was genius and something I may end up using someday.  Seeing Yuina realize that running an inn is hard, but fulfilling work, was wonderful since it seemed to really open her eyes to just how lucky she really is.  The bit of fanservice was pretty nice too.  And for some reason, I’m still stuck on that mango ice cream with fried chicken toppings…