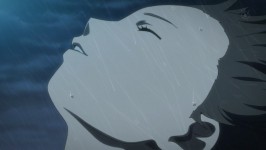 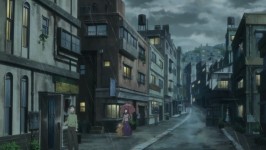 No.6 is the latest offering by Studio BONES. The story tells the tale of two boys, who meet up by chance and change each other’s prespective on life in the futuristic city known as No.6? With gorgeous animation, art and a very intriguing story, No.6 may very well be the best offering of the Summer 2011 season! …

Even though I watched it first in horrible quality, I could still tell that the animation was just…wow. And then I rewatched the better raws and WOW. NICE animation! You go Bones! Catchy OP, good ED. We have intrigue right off the bat and I’m very curious whats going on. Who was Nezumi running from? Secret government/private research organization? What made Nezumi run away? Does he special powers? Why is he wearing shorts? Why on earth is this show so slashy? XD I think we can expect good things from this show.

For starters, I’d like to say that I was very impressed with the animation.  It was absolutely breathtaking and left me with an open mouth a few times throughout the first episode.  Now, I’m a Fujoshi so I liked seeing a bit of slash in this, always good to let one´s imagination run wild for a bit.  Also, I am very intrigued by what No.6 Organization really is and what they dedicate themselves too.  Character designs are very good and the seiyuus did a particularly good job in fleshing out their personalities.  I am really looking forward to how this show turns out. Probably THE MUST WATCH of this season along with Tiger & Bunny and Usagi Drop.

Wow… Holy animation! This is one of the most jaw droppingly well done series this season. I’m fairly surprised that its not being simulcast, as this one of the series to get if you’re looking to get anime fans. I’m sure Funimation or someone will pick it up soon. Its just so pretty, and the story definitely has me intruiged. I love how the characters in the story are further illustrating what kind of sci-fi world No.6 is set in.

There were some Shounen-Ai vibes, and I’m sure the fangirls will have a ball with this series. Unless it gets blatant though, I’m going to continue to watch this series. Definitely one of the best series to come out this season, if the first episode is any indicator.

I had no real idea what this show was going to be about after reading the previews, but now that I’ve watched it, WOW.  Although it didn’t completely blow me away, the animation was gorgeous to look at the the characters we’ve seen thus far were pretty interesting.  Overall, the whole concept of most of humanity’s cities being lost due to war and six colonies being set up for the remaining population is intriguing on it’s own.  It almost reminds me of a sci-fi novel or comic, which really appeals to the sci-fi geek in me.  Even the fairly blatant shounen-ai vibes appealed to me, since it seems as though Shion and Mouse may either become a couple or become best friends as time goes on.  Either way, the cliffhanger at the end of the first episode was enough to get me to complain that it ended there and get me rooting for Shion to get away with harboring a fugitive.  After all, who would ever suspect a straight-A student on the fast track at age 12?  I sure as hell wouldn’t.  This is definitely one of the better shows so far this season and I’m eager to see where it’s headed and where it will end up.