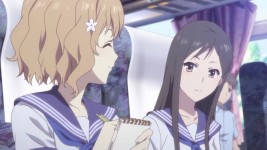 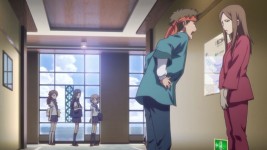 This week, not only are we treated to a new opening and ending song and animation, but we finally get the obligatory beach episode!  On top of some minor fanservice including the girls in swim suits, we also get a whole heap of drama dropped on us courtesy of Yuina.  As the episode kicks off, everyone is at the beach and Ohana is trying to convince Minko to take off her hoodie and go swimming.  Minko refuses, saying that she doesn’t want to get sunburnt, but Ohana counters with the fact that she heard a rumor saying that she had bought a really cute swimsuit.  When this doesn’t get a reaction out of Minko, Ohana then asks her if the reason she doesn’t want to take her hoodie off is because she doesn’t want anyone but Tohru to see her swimsuit.  This definitely gets a reaction from Minko, though probably not the one Ohana was looking for since Minko calls her a balut (again), but their argument is diffused as Yuina walks up in a cute ruffled, yellow swimsuit.  Of course, all of the guys stop and stare at her in awe (and probably lust, given their teenage hormones) and Yuina walks right up to Ohana and Minko to ask what’s going on.  Ohana tells her that Minko refuses to take off her hoodie and go swimming, so Yuina orders Ohana to put Minko in a headlock.  Somehow, the two girls move so quickly that Minko can’t stop them from grabbing her and ripping off her hoodie and shorts – to the thrill of the boys from their class – and throwing her into the ocean.  Of course, this doesn’t sit with Minko too well and she’s furious at them both.  Afterwards, on their way back to the hotel, Yuina and a few other students are doing karaoke while Ohana is busy writing a list of stuff she wants to take note of at the hotel to improve her work at Kissuiso.  Minko notices this and compliments her on being a hard worker, though Ohana just says that she won’t waste an opportunity to learn something, especially since the hotel they’re staying at is incredibly popular.  However, their attention is diverted when Yuina shoves the microphone in Ohana’s face, saying that she wants to hear her sing.  Ohana agrees and decides to do an enka ballad to Minko’s horror (though their teacher seems to have a soft spot for the song Ohana chose).

Once back at the hotel, the group is greeted by the staff and Ohana is still in awe of how large the hotel is.  Minko chides her and says that if she considered how many students are going, it only makes sense to have a large hotel.  Ohana agrees and the group sets off towards their rooms.  However, on the way there, Ohana, Minko and Yuina pause when they hear someone yelling.  It turns out that it’s one of the higher-ups lecturing a waitress about her nails and how she’s wearing too much makeup.  He goes on to yell at her about following the manual to a T, but stops when Yuina calls out to him and skips over.  His attention is completely diverted from the waitress at this point, who takes the opportunity to slip away, and he seems really excited that Yuina is there.  After a brief conversation, Yuina rejoins their group and when Ohana asks her how she knows him, Yuina simply says that he’s her fiance.  Of course, this causes everyone – especially the boys – to freak out that not only is Yuina already engaged to someone, but that she’s so calm about the whole thing.  Later that day, Ohana’s class goes back to the beach and while Yuina is off playing volleyball with some of the other girls, Ohana and Minko are sitting under an umbrella sulking.  Ohana is upset that while she also comes from a family that owns and operates inns, she hasn’t found a fiance in a nice, successful inn like Yuina has.  Minko is just irritated that despite Yuina being engaged, a boy drags her off to confess his feelings to her.  However, her irritation towards Yuina isn’t long-lived because the same boy who confessed to Minko earlier in the year asks her if he can talk to her in private.  When she says no and gets up to go back to the hotel, he shouts after her, saying that he’ll never stop having feelings for her and asks if that boy she described before was her boyfriend.  This both embarrasses and infuriates Minko because it’s in front of the entire class and she screams at him before running off. 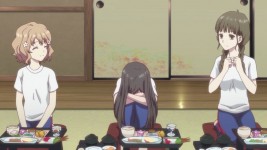 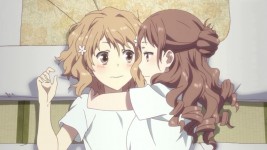 That night, all of the classes on the field trip are gathered in a large dining hall for dinner.  Nako is there as well and laments the fact that she didn’t get to go swimming on the first day, but is excited that she was able to bring her swimsuit that she wears for competitions.  Minko is still sulking about what happened at the beach and Nako asked what’s wrong.  Ohana explains what happened, but Minko snaps at her and tells her to not say anything else.  When their teacher appears and tells everyone they can start eating, Ohana, Nako and Minko notice just how many people are actually in the room.  Ohana and Nako comment that they’d never be able to serve this many people because it would take them all night just to set up the tables and Minko comments that the kitchen would probably explode.  Yuina seems surprised by this since this sort of dining hall is common in the inn her grandmother runs.  Somehow, this doesn’t help Ohana feel any better about things.  After dinner, the girls head back to their room to get their things for the bath when Yuina tackles Ohana and says that she wants them to be friends.  Ohana asks if the weren’t already friends and Yuina laughs, saying she wants to be better friends with her.  Ohana then says something about festing it up and Yuina asks her what it means because she’s been saying it a lot lately.  Ohana explains that it basically means working really hard towards a goal; Yuina decides to use it too.  On their way to the bath, the girls spot some sort of tram-looking thing and follow it, curious about what it is and where it’s headed.  It turns out that it’s a tram to transport the trays from meals from the dining hall to the kitchen for cleaning.  Yosuke (Yuina’s fiance) is there, monitoring the waitresses when he notices the girls behind him.  They ask him about the tram and he explains what it is and that it allows the inn to only hire part-time waitresses.  He then asks Yuina if he can talk to her alone and she agrees, but when they walk off, the waitress who was getting yelled at earlier by Yosuke gives the girls a dirty look before stomping off.

Once Yuina leaves them, Ohana and Minko are headed towards the bath when Ohana suddenly sees something in the ocean and rushes outside, leaving Minko alone.  Minko is confused but simply heads to the bath anyway.  Outside, Ohana rushes to the ocean and is shocked when she sees what she thinks is a kappa swimming.  To her relief, it’s only Nako and the two talk for a minute before noticing that Yuina and Yosuke are on the bridge.  Deciding to eavesdrop (as anyone should in these situations), they sneak closer and listen in.  Most of the conversation is Yosuke talking about the inn and how he wants to make it the most successful inn in Japan and Yuina admires his ambitions.  However, when he asks her to move to the inn and stay with him after graduating, she seems a bit put-off and asks him if he really enjoys working at the inn.  When he asks her what she means, Yuina simply laughs and says that she needs to head to the bath and runs off.  This confuses Yosuke, as well as Ohana and Nako, and the two girls sneak off and head back to the hotel.  Later, once Yosuke is back in his office, the waitress he reprimanded earlier asks if she can talk to him for a minute, but he asks her if she completed cleaning yet.  When she says no, he blows her off and says that the manual is absolute and there’s no leeway in terms of schedules.  This pisses off the waitress and she leaves the room, slamming the door behind her.  The next morning, after panicking that it was her turn to turn over the futons and she was late, Ohana and the group head downstairs for breakfast only to find a coupe of sorts happening.  All of the waitresses have quit and when the manager of the inn says that they can’t quit on short notice like that, the head waitress scoffs and says that she tried to tell the clerk (Yosuke) about it the night before, but he was too busy to listen to her.  Yosuke becomes angry and starts yelling again, but Yuina steps in and deals a finishing blow.  She informs Yosuke that she has a lot of dreams and whichever one she likes the best is what she’ll make her career, but running an inn isn’t one of her dreams. 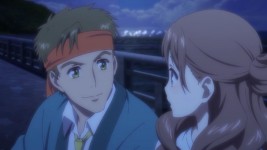 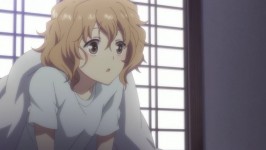 Opinions:  This was a great episode with a well-rounded mix of humor, mild fanservice during the beach scenes and drama on Yuina’s part.  I honestly wasn’t expecting that she was already engaged or that she would flat out tell her fiance that she doesn’t want to run and inn.  The fact that it was a Yuina-centered episode was a nice change of pace since until now, she’s just been the granddaughter of a rival inn.  Now she’s a bit more fleshed out and we see more of her wants, dreams and desires.  It’s a shame that running an inn isn’t one of her dreams, but I can’t exactly blame her.  It’ll be interesting to see how this turns out, especially since the previews for next week hinted that Ohana and Yuina may have a showdown.